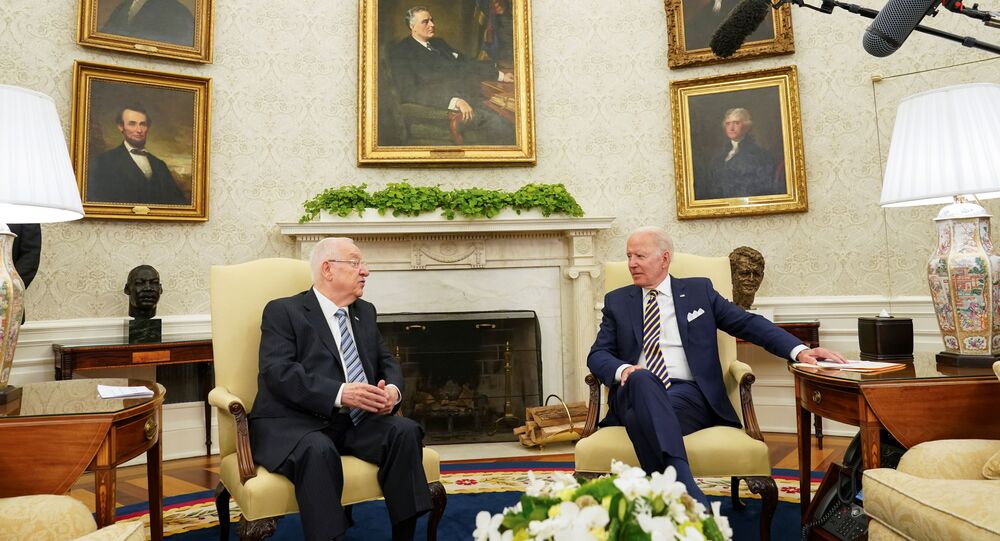 The Biden-Rivlin sit-down came amid the US administration's apparent efforts to reenter the Iran nuclear deal, which was unilaterally abandoned by Washington in 2018.

US President Joe Biden has made it clear that he is not going to tolerate Iran implementing its nuclear programme.

"What I can say to you is that Iran will never get a nuclear weapon on my watch", POTUS said during a meeting with outgoing Israeli President Reuven Rivlin in Washington on Monday.

Biden added that he had ordered airstrikes targeting facilities the US military claims were used by Iran-backed militia groups near the border between Iraq and Syria.

"Iran will never get a nuclear weapon on my watch, as they say ... I directed last night's airstrikes ... I have that authority under Article 2." pic.twitter.com/BGmP7r9erB

The PMF has denied having any such depots in the areas the US claimed to have struck. The strikes were followed by a rocket attack against an American base in eastern Syria, with the identity of the attackers still unknown.

During the Washington sit-down, Biden also pledged his "ironclad" commitment to Israel, saying, "It's real. It's something that I often say: If there weren't an Israel we'd have to invent one".

The talks came after White House Press Secretary Jen Psaki said last week that the Biden administration is "looking forward" to seeing the direction of the ongoing talks with Iran for the US to return to the Joint Comprehensive Plan of Action (JCPOA), also known as the Iran nuclear deal America unilaterally withdrew from in 2018.

"We don't currently have diplomatic relations with Iran or any plans to meet at the leader level. So it's unclear that anything has actually changed on that front", Psaki told reporters last Monday.

Talks to revive the JCPOA have been going on in Vienna since April. The agreement is not a legally binding treaty, but since the US reimposed economic sanctions against Iran after then-President Trump announced Washington's unilateral exit from the deal in May 2018, Tehran has steadily backed away from its commitments made as part of the agreement.

© AP Photo / Anonymous
Israel Warns It Will Do 'Whatever It Takes' to Prevent Iran From Obtaining Nuclear Weapons
A law passed by the Iranian Majlis in December 2020 contains mandated increases in the quality and quantity of uranium refining and a decrease in cooperation with International Atomic Energy Agency (IAEA) inspectors. Iranian leaders have repeatedly insisted that the Islamic Republic doesn't seek to obtain a nuclear weapon, despite claims to the contrary by Israel and the US.

Iran's position is that since the US was the first to leave the deal, it is Washington who must first return to the JCPOA, while the White House argues the ball is in Tehran's court. America's partners that are not party to the deal, such as Israel and Saudi Arabia, have pushed for the JCPOA to be expanded to include Iran's ballistic missile arsenal.

Iranian President-elect Ebrahim Raisi, for his part, says that his country's missile programme "is non-negotiable", and that the US "is obliged to lift all oppressive sanctions against Iran".

Washington's withdrawal from the JCPOA fuelled simmering tensions between the US and Iran, which escalated after top Iranian commander, General Qasem Soleimani was killed in early 2020 by a US drone strike authorised by then-President Trump.