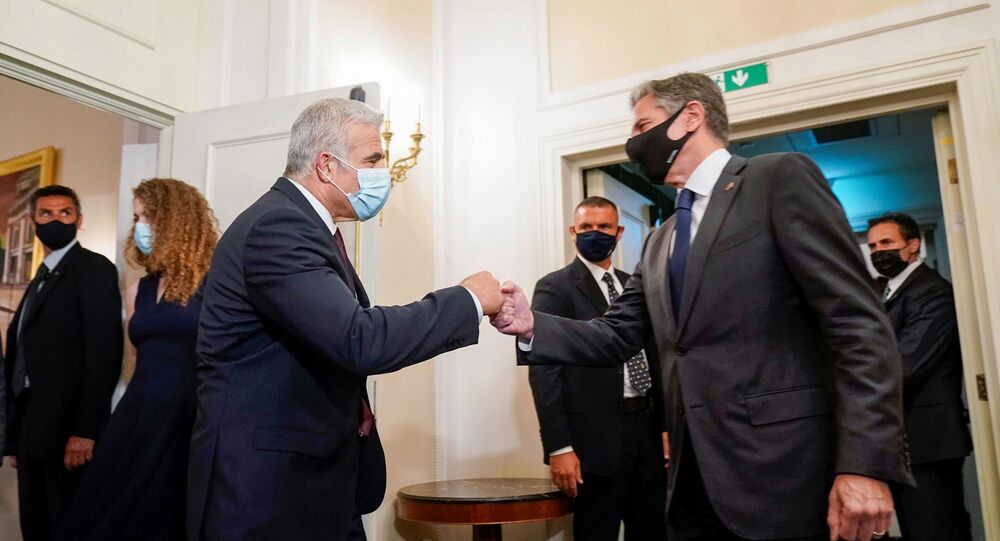 Israeli FM: 'Mistakes' Were Made in Relations With US During Netanyahu Era, 'We'll Fix Them'

It is doubtful that a new government in Israel will bring about a major change either in its relations with the United States, or its stance on the Palestinians. The Jewish State remains as Washington's number one ally in the turbulent region and a counterweight to Iran (given that Israel is widely believed to possess nuclear weapons).

The bipartisan stance on relations with Israel has been damaged in the United States, new Israeli foreign minister Yair Lapid told his American counterpart Anthony Blinken during the meeting in Rome Sunday.

"In the past few years, mistakes were made," Lapid said, adding, "we will fix those mistakes together."

Also during the meeting, Blinken reiterated the US' "commitment to Israel's security" and its support for the normalization efforts in the region, as several Arab states — the UAE, Bahrain, Morocco and Sudan —  recently chose to restore dilpomatic ties with the Jewish State.

Lapid also said that he'd spoken with US lawmakers from both political parties and "reminded them all that Israel shares America’s most basic values — freedom, democracy, free markets, the constant search for peace."

​The two sides could not avoid the "hot topic" — the ongoing talks on reviving the 2015 Iran deal that the previous administration ditched in 2018, slapping Tehran with harsh economic sanctions. For years, Israel has been sounding the alarm about its neighbor's nuclear program, accusing Tehran of secretly developing nuclear weapons (which Iran has denied).

The Israeli top diplomat told Blinken that Israel has "some serious reservations" regarding the Vienna talks on the revival of the JCPOA, but fell short of elaborating on them in public.

"We believe the way to discuss those disagreements is through direct and professional conversations, not in press conferences," Lapid said.

While Lapid spoke about the mistakes of the past, Israel under Benjamin Netanyahu enjoyed a particularly warm relationship with the administration of former US president Donald Trump. The latter made a number of diplomatic gestures to Israel, including the recognition of Jerusalem as the "undivided capital of Israel" and the Golan Heights as under Israeli sovereignty. The cherry on top was Trump's ambitious Middle East peace plan that envisioned Israel annexing settlements in the West Bank and the Jordan Valley.

Trump's cozying up to Israel was met with harsh criticism by Palestinians, as well as other Arab nations, though it did not stop them from normalizing relations with Tel-Aviv.

Russia has never believed that the deal in its current form would contribute to a lasting Middle East settlement and expected the Biden administration to potentially reject it.

UAE-based The National outlet reported in March, citing an official document of the US State Department, that Washington planned to reset relations with the Palestinian government, reversing Trump's policies that ignored the two-state solution principle as a basis for settling the longstanding conflict. However, no exact steps have been made so far.

Earlier this month, Trump lashed out at the Biden administration over the "great injustice" to Israel, criticizing the lack of protection it is now getting from the US Congress and touting how US lawmakers "loved" Israel when he was in the White House.