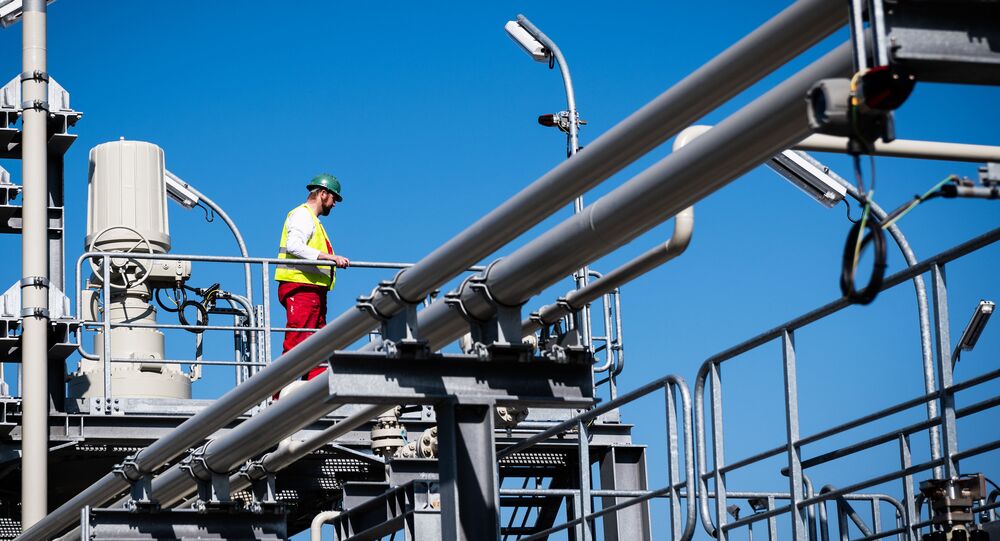 Earlier, after meeting with US State Secretary Antony Blinken, German Foreign Minister Heiko Maas underscored Berlin’s determination to ensure that the 745-mile-long pipeline, set to bring Russian gas to Germany under the Baltic Sea, is not used to undermine the interests of Ukraine.

The US and Germany are exploring ways to shore up support for Ukraine to alleviate the feared fallout from Moscow’s perceived geopolitical gains after the Nord Stream 2 gas pipeline is finished, Bloomberg reports.

It is purported that the US State Department and Germany’s foreign ministry have been considering a deal envisaging a number of options, with National Security Advisor Jake Sullivan and German Chancellor Angela Merkel’s foreign and security adviser, Jan Hecker, involved.

The sides hope to have hammered out some sort of agreement by the time Merkel visits Washington on 15 July to meet with US President Joe Biden, writes the outlet, citing several unnamed sources familiar with the negotiations. Shortly after that trip, Ukrainian President Volodymyr Zelenskiy has been invited to visit Washington.

Some sources cited by the publication suggested a draft proposal was already in place, with one person claiming the talks were not that far advanced.

One of the options suggested was for countries to commit to supporting Ukrainian infrastructure with investments to help it build its own power plants. Plans have been suggested to boost the sale of synthetic, or green, gas from Ukraine.

The US and Germany are also said to be considering compensating the country for transit fees it purportedly stands to lose once the pipeline, designed to transport natural gas across the Baltic Sea from Russia to Germany, bypasses it.

Russia has reiterated on numerous occasions that the project between Russia's Gazprom and European energy giants is purely an economic endeavour and has reaffirmed that it will not affect the gas transit through Ukraine as per existing contracts.

© RIA Novosti
Nord Stream: a gas pipeline to Europe under the Baltic Sea

Germany is also reportedly ready to negotiate with Russia on an extension of transit quotas for Ukraine.

The creation of a so-called “snapback” mechanism enabling the shutting off/limiting flows of gas through Nord Stream 2 if Russia is perceived as “coercing” Ukraine, previously brought up by the sides, has been opposed by German officials, who are wary of using Nord Stream 2 as a “political weapon”.

Furthermore, US officials are believed to be sceptical as to whether the proposal is even technically feasible.

Washington could also impose fresh sanctions on Russia based on an executive order President Joe Biden signed earlier this year. Germany may also reportedly enhance its support for the “Three Seas” initiative (3SI), designed to promote cooperation for economic growth and energy security in Europe.

On Wednesday, Secretary of State Antony Blinken, at a meeting with German Foreign Minister Heiko Maas in Berlin, confirmed that the two sides were talking about ways to “ensure that Russia cannot use energy as a coercive tool directed at Ukraine or anyone else”.

“We’re determined to see if we can make something positive out of a difficult situation that we inherited,” Blinken said.

He added that Washington hoped to “do what we can to make sure that the end result is that Europe’s energy security is not undermined – in fact, it’s strengthened; that Ukraine’s position is not weakened, that it’s actually reinforced”.

The White House has already introduced several rounds of sanctions against vessels and companies engaged in the construction of the pipeline, designed to deliver up to 55 billion cubic metres of natural gas from Russia to the EU annually.

Nord Stream 2, now almost 90 percent complete, has been denounced by Washington from the outset as set to increase the EU's dependence on Russian gas. Furthermore, Washington has been hawking its own LNG.

The US blacklisted 13 Russian ships and three firms linked to the project, prompting Swiss pipe-laying company Allseas to withdraw, in anticipation of the enactment of the National Defense Authorization Act (NDAA) signed by then-President Donald Trump.

Russian ship 'Fortuna' resumed work in its place almost a year later in waters off Denmark. It was subsequently joined by another Russian pipe-laying vessel, the 'Akademik Cherskiy'.

In May, in a shift of tack, a decision was made by the Biden administration to waive sanctions against Nord Stream 2 AG, the Switzerland-registered firm behind the pipeline's construction, and its German CEO Matthias Warnig. At the time, US Secretary of State Antony Blinken said that it was in the US "national interest" to keep Warnig and Nord Stream 2 AG unaffected by sanctions.

Instead, officials vowed to work with Germany and other allies to reduce the pipeline’s perceived detrimental impact.