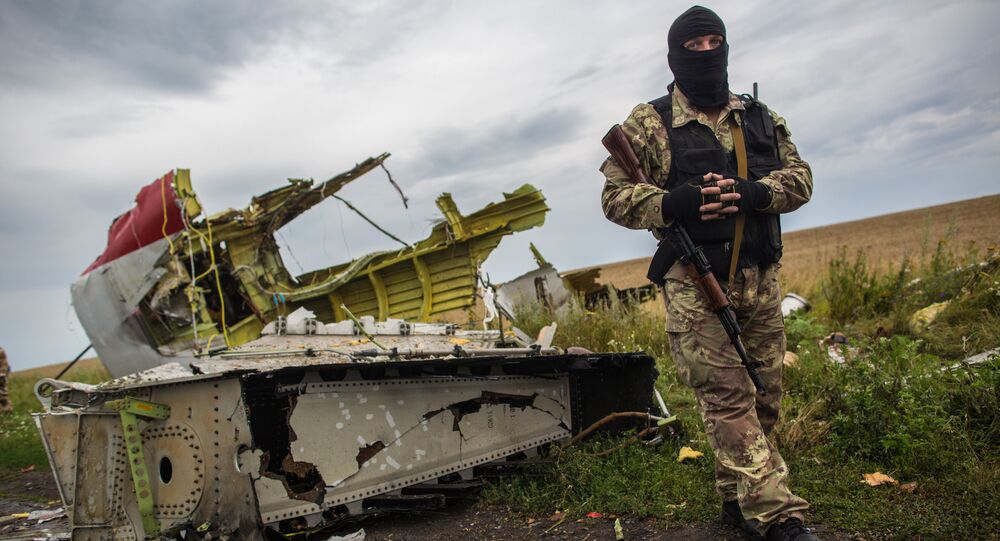 AMSTERDAM (Sputnik) - As the Netherlands has resumed court hearings on the downing of flight MH17 in eastern Ukraine, the country's Foreign Ministry said that it may consider launching an additional investigation into the failure to close the airspace for civilian aircraft on the day of the MH17 flight crash.

The decision to look into the matter again is sparked by last week's session of the Dutch lower house when the lawmakers expressed their dissatisfaction with the inquiry report by the Flight Safety Foundation, a US-based nonprofit. An additional investigation will be a subject of discussion between the legislature and the Dutch Foreign Ministry, ministry spokesperson Bo de Koning said.

"The [acting] minister of foreign affairs [Sigrid Kaag] has committed to getting back to the parliament on this issue at a later stage. There should be more on this by the summer," de Koning said.

Ukraine's Role in 2014 Incident Under Scrutiny by Dutch Lawmakers

In January, the Flight Safety Foundation released its inquiry report based on its analysis of 34 cases of civilian flights crashing in conflict zones from 1985 to 2020. In its findings, the foundation claimed that the official Kiev was unaware of the risk to civilian flights in July 2014. Now, Dutch lawmakers point out the lack of information in the foundation's report and highlight the need for an additional investigation.

Raymond de Roon, a lawmaker from the Party for Freedom, has said that he was disappointed with the report, as the researchers did not have access to a significant amount of information.

Meanwhile, acting Foreign Minister Sigrid Kaag said that she understood the lawmakers' concerns, but warned that another investigation into the matter was unlikely.

© AP Photo / REMKO DE WAAL
General view of the Judicial Complex Schiphol in Badhoevedorp, on June 19, 2019, where will be held the trial of the four people over the MH17 Malaysia Airlines plane crash in 2014. - International investigators on June 19, 2019 charged four people with murder over the 2014 shooting down of flight MH17 above rebel-held eastern Ukraine in which 298 people were killed.

This February, however, the Netherlands turned a blind eye to the issue, saying there was not enough proof to hold Kiev responsible for not shutting down the country's airspace, claiming the lack of convincing legal grounds to bring the Ukrainian authorities to account.

Stef Blok, who served as the foreign minister at the time, wrote in a letter that the report determined that there was not enough evidence to prove that the Ukrainian authorities were aware of the dangers for civilian flights in the eastern part of the country.

Russian Foreign Ministry spokeswoman Maria Zakharova responded to the letter by accusing the Hague of ignoring the actions of Kiev.

Dutch Safety Board Highlights the Issue

In October 2015, the Dutch Safety Board published an analysis of the downing of MH17, in which, among other things, concluded that Ukrainian authorities should have closed the airspace in the eastern part of the country on the day of the incident, where armed fighting was taking place.

According to the then-chairman of the board, Tjibbe Joustra, the risk for civilian flights was not assessed properly.

In 2019, the Netherlands agreed to hold an independent inquiry into why the airspace in eastern Ukraine was not shut down, due to the insistence of the lower house.

MH17 Hearings Not Concerned With Ukraine

A well-informed source said that the fact that the airspace was open at the time was the main cause of the MH17 crash.

Nevertheless, the issue of Kiev's possible role in the tragedy has not been raised during the hearings on the downing, which started in March 2020.

Marije Knijff, a Hague district court judge, said that the court cannot raise the issue as only the prosecution can do that. However, in this case, the prosecutors are only interested in determining the responsibility of four suspects — Russian nationals Igor Girkin, Sergey Dubinsky and Oleg Pulatov, and Ukrainian national Leonid Kharchenko.

The Malaysian Boeing bound to Kuala Lumpur crashed in July 2014 while flying over a conflict zone in eastern Ukraine, killing all 298 people aboard. An international group of investigators claims that the plane was downed by a Buk missile belonging to the Russian armed forces. Moscow has denied the allegations on multiple occasions. Though Russia offered help with the investigation, it was denied access to the probe.

Almaz-Antey, the Russian maker of advanced anti-aircraft systems, whose products include the Buk type air defence missile, carried out its own investigation into the MH17 crash, examining forensic evidence, declassifying secret information about its military hardware, and conducting a complex experiment based on ballistics, flight trajectory and other pertinent information. The Russian investigators concluded that an older variant of the Buk missile which was built in 1986 and had been phased out of Russia's arsenal during a military modernisation campaign in the early 2010s had been used to target and destroy the plane.