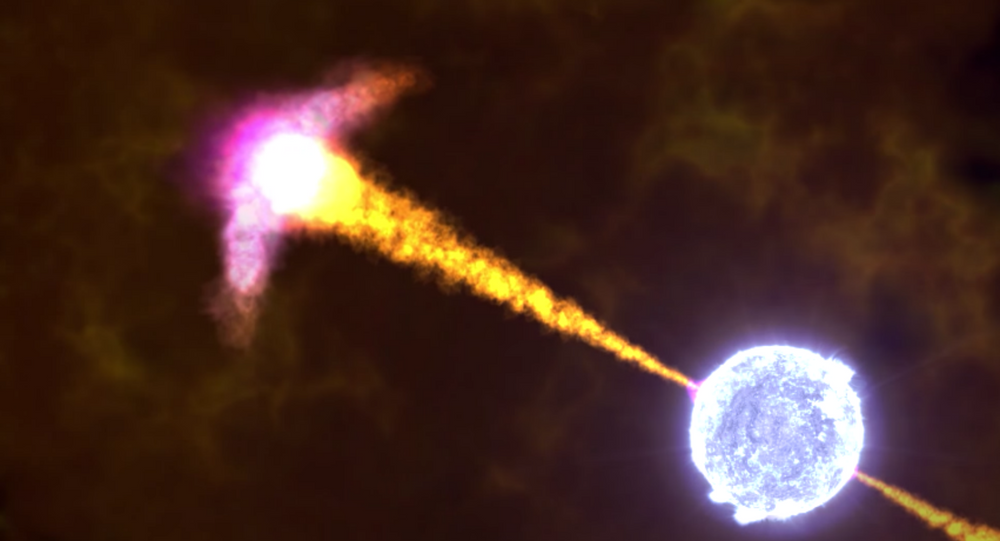 The team of scientists used the fully autonomous robotic Liverpool Telescope and the novel RINGO3 polarimeter to solve the mystery. Meanwhile, they also proved that the blast was likely powered by the collapse of ordered magnetic fields in the first moments of the formation of a new black hole.

An international team of scientists, led by astrophysicists from the University of Bath, after measuring the magnetic field in a far-off gamma ray burst, has confirmed for the first time a decades-old theoretical prediction. The team found that the magnetic field in these blast waves becomes scrambled after the ejected material crashes into and shocks the surrounding medium.

When a massive star dies in a catastrophic explosion, it powers a blast wave and ultimately forms a black hole. These extremely energetic events drive out material at velocities close to the speed of light and generate bright, short-lived gamma-ray flashes that can be detected by satellites orbiting the Earth. These flashes are called gamma-ray bursts (GRBs).

"We measured a special property of the light -- polarisation -- to directly probe the physical properties of the magnetic field powering the explosion. This is a great result and solves a long-standing puzzle of these extreme cosmic blasts -- a puzzle I've been studying for a long time", head of astrophysics at Bath and gamma-ray expert Professor Carole Mundell told the media.

It is noteworthy that Mundell's team was the first to discover highly polarised light minutes after the burst that confirmed the presence of primordial fields with large-scale structures.

The teams who observed GRBs at a slower rate found low polarisation and concluded that the fields had long since been destroyed, but didn't know how or when. Meanwhile, a team of Japanese astronomers announced the intriguing detection of 10 percent polarised light in a GRB. This detail helped them interpret it as a polarised forward shock with long-lasting ordered magnetic fields.

© CC0
Gamma Ray Explosion on the Surface of a Hot Dead Star Captured by Radio Telescopes
"These rare observations were difficult to compare, as they probed very different timescales and physics. There was no way to reconcile them in the standard model", lead author of the new study, Bath PhD student Nuria Jordana-Mitjans, told media. The mystery had remained unsolved for over a decade until the Bath team analysed GRB 141220A.

Mundell's team published in its report the discovery of very low polarisation in forward shock light detected just 90 seconds after the blast of GRB 141220A. The super-speedy observations were reportedly made possible by the team's intelligent software on the fully autonomous robotic Liverpool Telescope and the novel RINGO3 polarimeter. This polarimeter logged the GRB's colour, brightness, polarisation, and rate of fade.

The investigation helped the team prove that the light originated in the forward shock, and the magnetic field length scales were much smaller than the Japanese team had inferred.

It also proved that the blast was possibly generated by the collapse of ordered magnetic fields during the initial period of the formation of a new black hole, and the mysterious detection of polarisation by the Japanese team could be explained by a contribution of polarised light from the primordial magnetic field before it was destroyed in the shock.