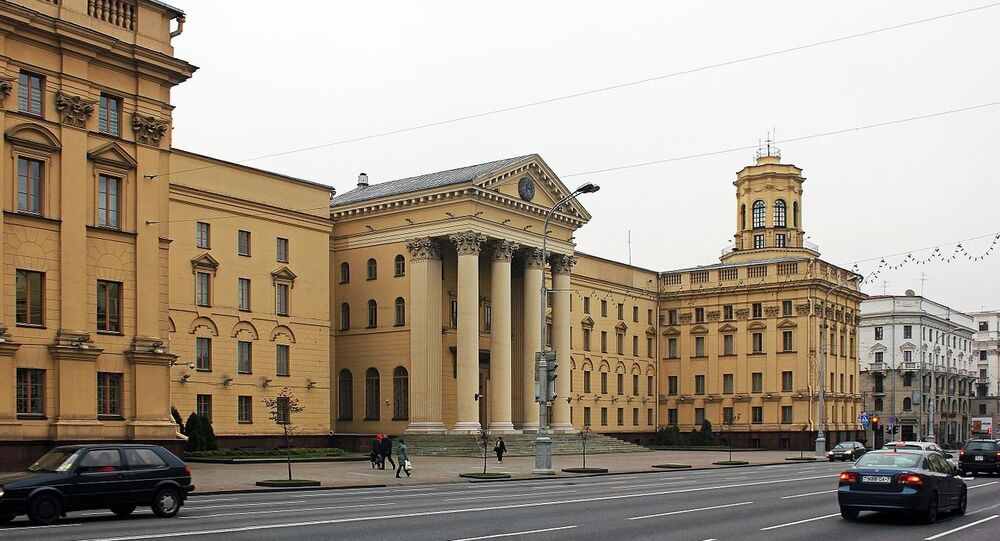 WASHINGTON (Sputnik) – The US Treasury Department has designated 16 persons and five entities from Belarus, including the State Security Committee (KGB) and press secretary of the Belarusian president, as part of the new sanctions package following the Ryanair incident in May and alleged human rights violations.

“Today, the U.S. Department of the Treasury’s Office of Foreign Assets Control (OFAC) designated 16 individuals and five entities pursuant to Executive Order (E.O.) 13405 in response to the Lukashenka regime’s escalating violence and repression, including its reckless forced diversion of a commercial Ryanair flight and arrest of journalist Raman Pratasevich (Pratasevich) and his companion, Sofia Sapega (Sapega)”, the department said in a release.

Goal of EU’s New Sanctions Against Belarus is to Deprive Gov’t of Funding, Maas Says

The EU has also joined the US in sanctioning Belarusian authorities.

"The goal of sectoral sanctions is, of course, enterprises, in Belarus these are state, monopoly enterprises, there are enterprises through which the [Belarusian President Alexander] Lukashenko regime receives funding, and these sources of funding will dry up step by step", Maas said after the EU Foreign Affairs Council meeting in Luxembourg.

The Vilnius-bound Ryanair flight was diverted to Minsk on Sunday over a suspected bomb threat, which later turned out to be false. Among the passengers was Roman Protasevich, 26, the co-founder of a Telegram channel that Minsk previously branded extremist. He was detained during the stopover at Minsk Airport and may face up to 15 years in prison. His girlfriend Sofia Sapega, 23, a citizen of Russia studying in Lithuania, was travelling with him; she was also detained and later arrested for two months on suspicion of organising mass riots in Belarus after the presidential election in August 2020.

© AP Photo / Bebeto Matthews
UN Security Council President Says 'Impossible' to Issue Statement on Ryanair Incident
The incident triggered a wave of criticism from European leaders, who accused Belarus of meddling with the European Union's civil aviation and accused Minsk of using a fake bomb threat as a pretext to ground the plane and arrest Protasevich. Minsk responded by saying that it acted in line with international aviation rules and on Tuesday published the script of its air traffic controllers' conversation with the pilot of the Ryanair flight, which proved that no pressure was put on the crew to land in Minsk.

This is not the first time a plane has been grounded at the request of a third country. In 2013, the plane of Bolivia's then-President Evo Morales was directed by Austria to make an emergency landing at the behest of the United States during the hunt for National Security Agency whistleblower Edward Snowden. The former NSA contractor was not on board, though.