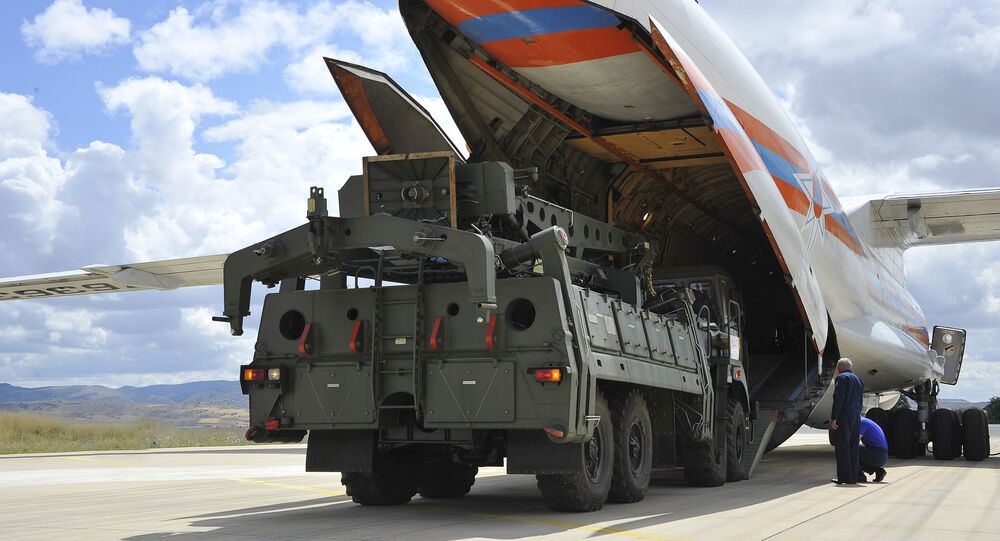 The United States has spent years pressuring its NATO ally not to buy the Russian-made missile system, claiming that it poses a threat to the alliance and is incompatible with NATO equipment. Ankara's intransigence prompted Washington to kick Turkey out of the F-35 fighter programme and to sanction an entity coordinating Turkey's defence sector.

"I told Biden: Do not expect Turkey to take any new steps in relation to the F-35 or the S-400. Because we already did our part on the F-35. We asked you for the Patriot air defence system, but you did not give it to us. On the contrary, you even took away those that were stationed at our bases. What could we do? We solved this issue on our own," Erdogan said, speaking to reporters in Baku, Azerbaijan, his remarks cited by Sputnik Turkey.

Turkey and Russia penned a $2.5 billion deal in late 2017 on the delivery of four S-400 mobile air and missile defence batteries. Deliveries of the system began in 2019. Turkey has since indicated that it would like to purchase more S-400s.

The Turkish president confirmed to reporters that President Biden would like to pay a visit to Turkey, and noted that amid the imminent US and NATO withdrawal from Afghanistan, Ankara is prepared to take on "much more responsibility there."

He added that Turkey plans to discuss the subject of defence industry cooperation with its US ally in greater detail. "In the future negotiation process, the heads of the foreign ministry, the ministry of defence and the defence industry will be involved," Erdogan indicated.

Erdogan arrived in Azerbaijan for an official state visit on Tuesday. Turkey has actively expanded its diplomatic activities in the Caucasus region in the aftermath of the Soviet collapse, and provided Azerbaijan with some of the advanced drones it used in the recent war with Armenian militias in the contested Karabakh region.

Turkish-US Relations at a Turning Point?

© REUTERS / MURAT CETINMUHURDAR/PPO
'I'll Let the Turks Tell You About It': Biden Tight-Lipped About Specifics of Talks With Erdogan
Biden and Erdogan were all smiles at their first face-to-face talks in which Biden served in his capacity as US president on the sidelines of the NATO summit in Brussels on Monday. The two leaders remained tight-lipped on whether any breakthroughs were reached in several long-standing disputes between their nations, including the S-400 issue, US support for Kurdish militias in Syria, America's recent recognition of the Armenian Genocide, and other matters.

Biden said he felt "very good" about the meeting, calling it "positive and productive" and expressing confidence in making "real progress" in improving relations. Erdogan called the talks "productive and sincere" and said there were "no issues" in the US-Turkish partnership "that are unsolvable."

The Biden administration has made improving relations with Turkey a priority in a bid to prevent the latter from aligning closer to Russia and China. However, the US's historic decision in April to recognize the Armenian Genocide - a term Turkey refuses to use to describe the events of 1915-1917 against the Ottoman Empire's Armenian population, escalated tensions to new levels, with thousands of Turks gathering outside military bases containing US troops and demanding their withdrawal, with some also calling for Turkey's exit from NATO. In late April, media affiliated to the Turkish military accused the US of carrying out a series of mass genocides that killed nearly 84 million people.