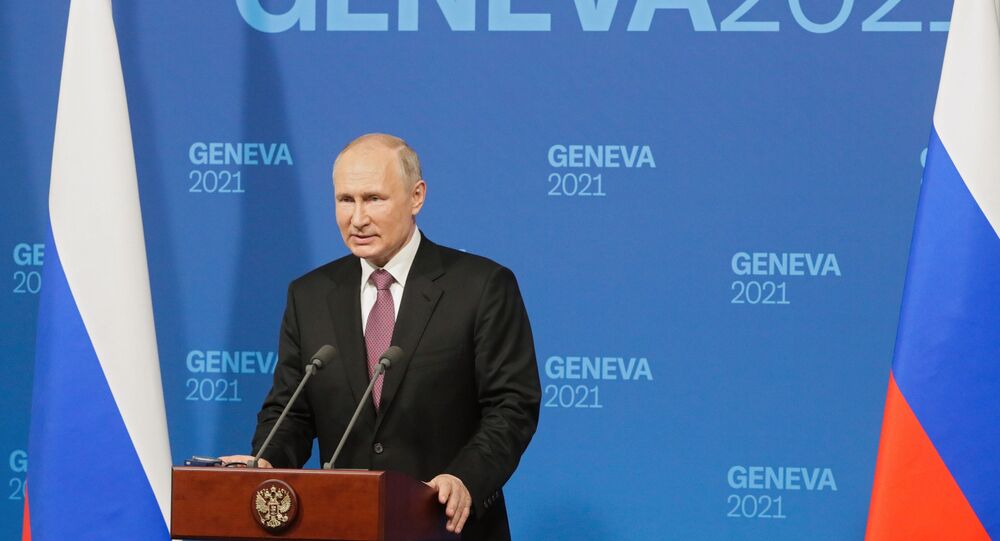 GENEVA (Sputnik) - Speaking at a press conference after the meeting with Joe Biden on Wednesday, Vladimir Putin listed cybersecurity, strategic stability, the Arctic, human rights and foreign media treatment among the issues that were addressed during the 4-hour talks.

The world's attention on Wednesday was riveted at luxury lakeside Villa La Grange where Putin and Biden met face-to-face for the first time in Biden’s presidency. The meeting, which was held under enhanced coronavirus measures, lasted 4.5 hours. The presidents did not hold a joint press conference, and Putin's presser took place before the press conference of his counterpart.

Speaking at the press conference Putin stressed that both Moscow and Washington are responsible for the world stability since they are two major nuclear superpowers "in terms of nuclear warheads, re-entry vehicles and delivery means, as well as the quality and the modernity."

He added that two countries are set to begin consultations on the next steps to ensuring strategic stability, following the recent extension of the New START treaty.

"I think it's clear for everyone the fact that President Biden has taken on the responsibility and has taken the decision, which we think is quite timely, to extend the New START treaty for five years," Putin said.

This February, the United States officially extended New START that is premised on the proposition that each side ultimately reduces their nuclear arsenal to a total of 700 missiles, 800 launchers and 1,550 deployed warheads, prolonging the expiry date till February 5, 2026. The US decision to re-animate the treaty, which was sealed by then US President Barack Obama and then-Russian President Dmitry Medvedev, was hailed by Russia.

The issue of cybersecurity has moved to the forefront of global politics after several high-profile hacking attacks against US infrastructure, with some suspecting Russian involvement, despite Moscow's protests to the contrary.

Speaking at the press conference, Putin said that he agreed with Joe Biden to start consultations on cybersecurity which is extremely important for the whole world as well as for Russia and the US.

He noted that Russia received some 12 requests about cybersecurity incidents from the US and Moscow provided "exhaustive answers." In its turn, Russia sent last year 45 such requests in 2020 and 35 this year to the relevant issue.

"And no response has been provided so far," he noted.

Putin announced that he touched upon Ukraine in his talks with Biden. He said that he believes that Biden agrees that the Minsk agreements as the way forward in resolving the conflict in eastern Ukraine. Putin also stressed that Russia's sole commitment in Ukraine is to promote the successful implementation of the Minsk agreements.

US-Russia relations have been in a downward spiral since 2014 after the Obama administration placed sanctions on Russia over Ukraine and Crimea. Washington later accused Moscow of meddling in the 2016 US presidential election. Russia has repeatedly denied interfering in Ukraine and in US politics.

The Arctic, another issue of contention between Moscow and Washington, was discussed during the meeting. Putin stated that the concerns about the militarization of the Arctic have no grounds, and urged Washington to begin cooperating with Moscow on the issue during the meeting with his counterpart. He added that Russia has also been building infrastructure for rescue operations to ensure the safety of people using the Northern Sea Route and that he does not see any reason for concern here.

Putin further urged the United States and the Arctic Council country members to strengthen cooperation on solving the existing issues connected to the Arctic development.

The council was established in 1996 as a high-level intergovernmental forum promoting cooperation in the region with a focus on environmental protection. The council includes Canada, Denmark, Finland, Iceland, Norway, Russia, Sweden, and the United States.

The issue of the jailed opposition activist Alexey Navalny was also raised during the presser. Replying to journalists' questions, Putin said that returning to Russia, Navalny knew that he was violating Russian law. He also noted that the fact that Navalny's Anti-Corruption Foundation was labelled as a foreign agent does not mean that it ceased operation,

He added that he discussed the theme of human rights at the meeting with Biden.

Putin also expressed the belief that a compromise on the prisoner exchange with the United States can be found, as the Russian Foreign Ministry and the US State Department will start relevant consultations.

He further noted that Russia holds military drills on its own territory and never deploys troops and equipment to foreign borders, while the United States does it right now.

Biden raised the issue of Radio Free Europe/Radio Liberty, designated as a foreign agent in Russia, during the Geneva summit, Putin said, adding that Sputnik and RT, both labeled as foreign agents in the US, comply entirely with US laws.

"I got the impression that members of the US delegation did not know that before that, the US side named Russia Today and Sputnik, the two media outlets that are for an overseas audience, as foreign agents, took away the accreditation. All that we did was in response, despite the fact that Russia Today complies with all the requirements of US regulators and US law," Putin said.

The work of the Russian media outlets in the West has become increasingly difficult in recent years. Western politicians, including those in the United States, have accused Sputnik and RT of engaging in disinformation and of meddling win election without providing any evidence. Russian officials have called such allegations unfounded.

Sputnik and RT have also faced direct pressure from Western governments and entities. The United States government forced the media outlets’ partners to register as "foreign agents" and imposed frequent reporting requirements on them.