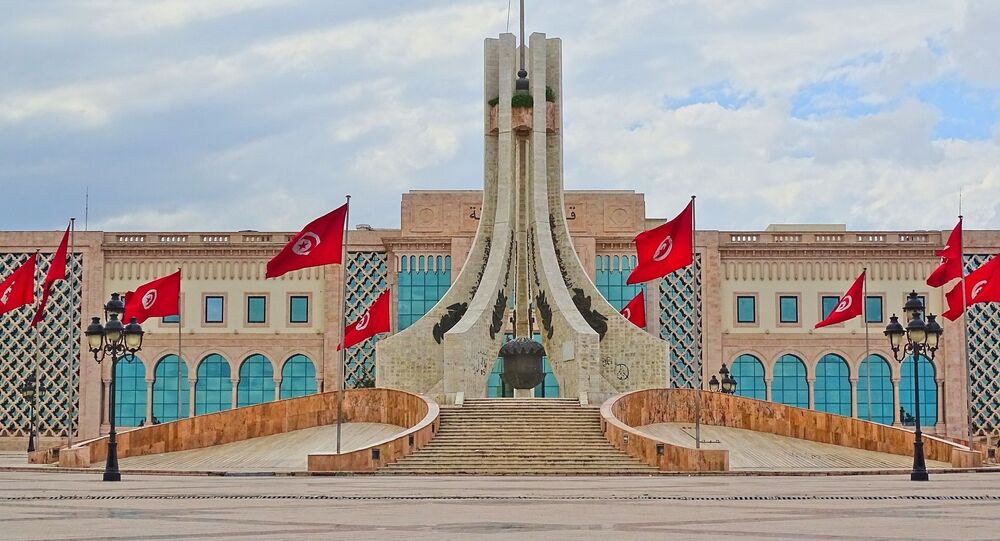 MOSCOW (Sputnik) Ekaterina Chukaeva - Cooperation in space has become a subject of growing interest in Russia and Tunisia after the launch of the first Tunisian satellite on board Russian carrier rocket Soyuz this year, Tunisian Ambassador Tarak Ben Salem said.

"Aerospace cooperation is now the subject of a particular interest, mainly after the launch of the Tunisian satellite Challenge ONE on March 22 by the Russian Soyuz-2 rocket from the Russian Baikonur Cosmodrome in Kazakhstan, and the agreement to expand this cooperation via the creation of a centre of aerospace technologies and science in Tunisia," the ambassador said.

According to Ben Salem, Tunisian President Kais Saied wished to see Russia contribute to the training of the first Tunisian woman astronaut. Russian state space corporation Roscosmos has recently announced that it was negotiating a spaceflight to the International Space Station on board a Soyuz spacecraft by representatives of four countries, including Tunisia.

The Tunisian diplomat also stressed that there are several areas of common interest on which Tunisia and Russia could work together.

"The next session of the [Russian-Tunisian Intergovernmental] Commission, which will take place in Moscow before the end of this year, hopefully, will be a favorable occasion to discuss new areas of cooperation and to enrich the legal framework by signing several other programs of cooperation in the fields of health, education, sports, culture and environment," he said.

Tunisia and Russia can cooperate in many spheres, including railroad and maritime infrastructure projects, agricultural development and tourism investments, the ambassador said, adding that the countries can also join forces in the fight against environment pollution.

The first domestically-made Tunisian satellite Challenge ONE was inaugurated in 2019. The date of the 22 March launch coincided with Tunisia's independence day. Tunisian aerospace and telecommunications company Telnet signed a deal with Russia's Glavkosmos Launch Services, the operator of Soyuz-2 commercial launches, for a total of 30 Tunisian satellites to be placed into orbit by 2023.

Tunisia has complete confidence in Russia's expertise in all its vaccines against COVID-19, Tarak Ben Salem said.

Russia's double-dose Sputnik V vaccine was registered in August 2020 and has since been reinforced by its single-dose version, Sputnik Light, and two other Russian vaccines —  EpiVacCorona and CoviVac. Tunisia registered Sputnik V in January and received the first doses in March.

"Regarding other Russian vaccines, Tunisia has complete confidence in Russian skills and know-how and is following with interest all the scientific data and the opinions of the competent bodies in the matter," the ambassador said when asked whether Tunisia is planning to approve more Russian vaccines.

He noted that Tunisia seeks to manufacture and subcontract the manufacturing of vaccines on its territory.

"It [Sputnik V] was the first anti-COVID-19 vaccine to enter Tunisian territory. In addition, Tunisia has the technical skills to manufacture the Russian vaccine under license in Tunisia, within the framework of the provisions formulated by the highest Russian authorities," Ben Salem noted.

Tunisia hopes that the acceleration of the current vaccination campaign in Tunisia and other countries will make it possible to achieve collective immunity so that global travel restrictions can be lifted and people can return to normal life, the ambassador said.

"We also want the borders between Tunisia and Russia to be opened as soon as possible to be able to resume trade flows between the two countries," he added.

The diplomat noted that Tunisia has also started to gradually reopen its borders, taking into account the situation with COVID-19 in the rest of the world.

Tunisia hopes that the transitional political process underway in Libya can lay the basis for a lasting peace, which would benefit the entire North African region, Tunisian Ambassador said.

Last fall, Libyan rivals launched UN-facilitated talks in Geneva, which resulted in a nationwide ceasefire agreement after almost a decade of conflict. In early February, the Swiss-hosted round of intra-Libyan talks led to the election of an interim Government of National Unity (GNU) that will be in charge until the general election on 24 December.

"Tunisia hopes that the transitional political process which is currently underway in Libya, mainly the elections in December, can lay the groundwork for lasting peace. The final stabilization of Libya can only benefit the entire North African region," the ambassador said.

The lasting peace will also be beneficial for bilateral Libya-Tunisia relations, reviving the development of trade and economic relations, he said, adding that Tunisia was "among the countries most affected by the Libyan crisis in terms of security and economics."

"Tunisia and Libya, which now share democratic values, will certainly commit to socio-economic development [of both countries] and to strengthening their relations in the common interest of their two brotherly nations," Ben Salem said.

He noted that the positive development of events in Libya in recent months has allowed the countries to boost bilateral relations. Since then, several high-level visits have taken place in Tripoli and Tunis.

In March, the Libyan parliament approved the GNU composition. The 26-strong cabinet is said to be free of those who served in Libya's previous governments.