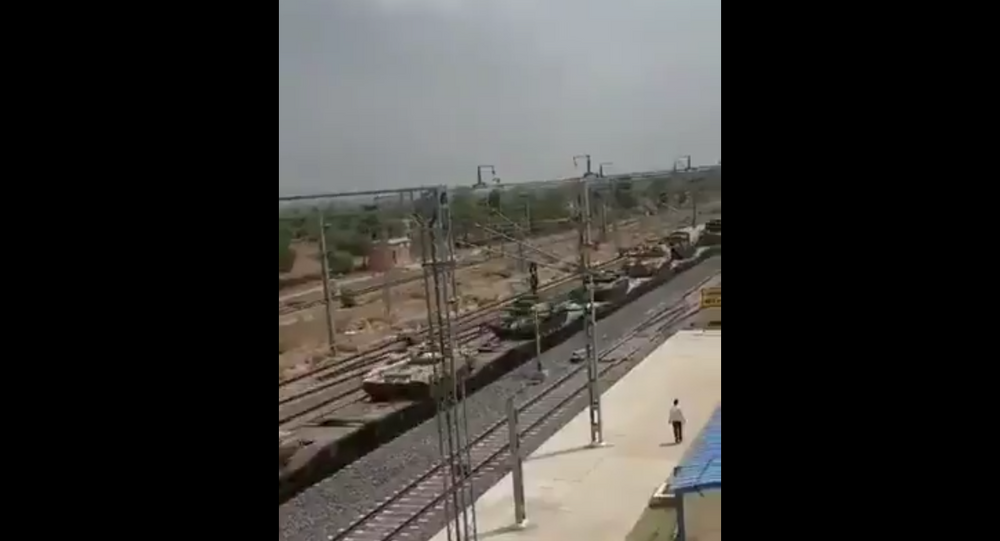 With little headway in the de-escalation of tensions at the Line of Actual Control (LAC), India and China have started mobilising additional military resources. The border stand-off between the two Asian rivals escalated last year with a deadly skirmish in Galwan valley on 15-16 June 2020.

The Indian Army on Sunday moved tanks, artillery guns and other resources on a military train as part of a trial of the 'Dedicated Freight Corridor' developed by Indian Railways.

The trial coincided with the first anniversary of the clash between the Indian Army and the Chinese People’s Liberation Army at Galwan in eastern Ladakh sector of the border. The dedicated track is expected to enhance the mobilisation capability of Indian armed forces across the country.

The video of the trial released by Indian Railways on Monday shows a train traveling from the northern state of Haryana to a location in the western state of Rajasthan carrying weapons and equipment, including many T-90 main battle tanks, South Korean self-propelled K9Vajra-T 155mm howitzers, armored recovery vehicles, off-road trucks for extreme operations, and armored personnel carriers, among other devices.

#IndianArmy moved its tanks, artillery guns on a military train as part of a trial of the recently developed “Dedicated Freight Corridor" by Railways. pic.twitter.com/yztNEbClNf

​“These trials herald the first step in this process to pave the way for enhancing the operational readiness of the Armed Forces. This initiative would set in place processes to ensure that military requirements are dovetailed in the national infrastructure development at the planning stage itself,” a statement issued by India's Defence Ministry read.

© REUTERS / Indian Army
A handout photo released by Indian Army on February 16, 2021 shows the disengagement process between Indian Army and China's People's Liberation Army from a contested area in the western Himalayas, in Ladakh region.

Dedicated Freight Corridors are expected to up the speed in mobilising resources from one part of the country to another, as they have better operational and manpower efficiency, compared to the existing Indian Railways. The corridors are equipped with modern technology, faster speed and the latest communication systems.

India has been ramping up its resources for the last few months, with the defence establishment confident that the country is better prepared to deal with any eventualities along the LAC, as compared to last year.

© AP Photo / Mukhtar Khan
India Ready to Meet Any Challenges on China Border, Says Ladakh Row 'Profoundly Disturbed' Trust
India and China maintain a deployment of thousands of troops, tanks and artillery guns at close range after talks to disengage and de-escalate broke down on 9 April. Since that time, India has deployed all of its primary fighter jets, including the newly-inducted French-built Rafales in the Eastern Ladakh region while China has also carried out a series of border military drills.

The 11th round of talks between military commanders on 9 April ended inconclusively after India refused to withdraw troops from friction points along the LAC in Eastern Ladakh until the Chinese army “disengaged” from areas including Gogra, Hot Springs and the Depsang plains.