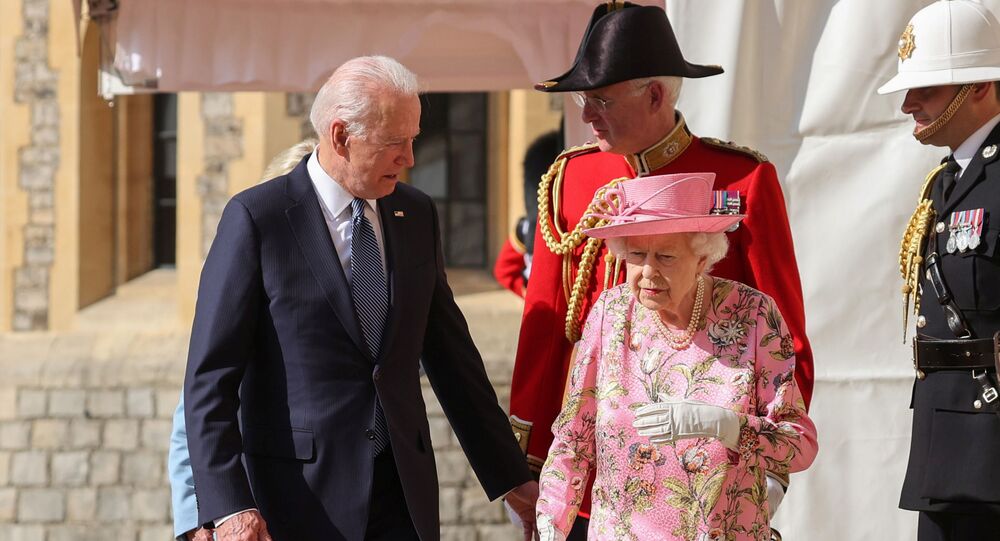 'She Reminded Me of My Mother': Biden Invites Queen Elizabeth II to White House

Earlier this week, the US president reportedly breached royal protocol while attending a G7 dinner reception in England by allegedly making the Royals wait for him and his spouse.

US President Joe Biden has invited Queen Elizabeth II to the White House after Her Majesty welcomed POTUS and his wife, FLOTUS Jill Biden, at Windsor Castle.

The US first couple and the 95-year-old British monarch met for afternoon tea.

"I don't think she’d be insulted but she reminded me of my mother, the look of her and just the generosity", Biden told reporters after their rendezvous.

US President Joe Biden and First Lady Dr Jill Biden are having tea with the Queen at Windsor Castle this evening. pic.twitter.com/MYxA3YLQIs

Shortly after the meeting with the Queen, which coincided with the third and final day of the G7 summit, the Bidens departed from London's Heathrow Airport.

This wasn't their first meeting on the sidelines of the G7 summit: the US president and the first lady met the Queen on Friday when she attended a reception for G7 leaders at the Eden Project.

© REUTERS / TOBY MELVILLE
Rebel Joe: POTUS Reportedly Breaks Royal Protocol Making Queen Wait For Him
According to the Daily Mail, Biden breached royal protocol while attending a G7 dinner reception in the UK. The publication referred to Debrett's, a leading authority on royal etiquette, suggesting that per protocol, all guests must arrive at the venue before the royals and no guest should leave an event before members of the royal family.

Joe and Jill Biden purportedly arrived five minutes after the Queen got there with her son, Prince Charles, and the Duke and Duchess of Cambridge, Prince William and Kate.

Sunday's high-profile reception for the Biden couple, which included a military band playing both the British and US national anthems, means the Queen has now formally met 13 of the last 14 US presidents, excepting Lyndon B. Johnson, since she assumed the throne in 1952.