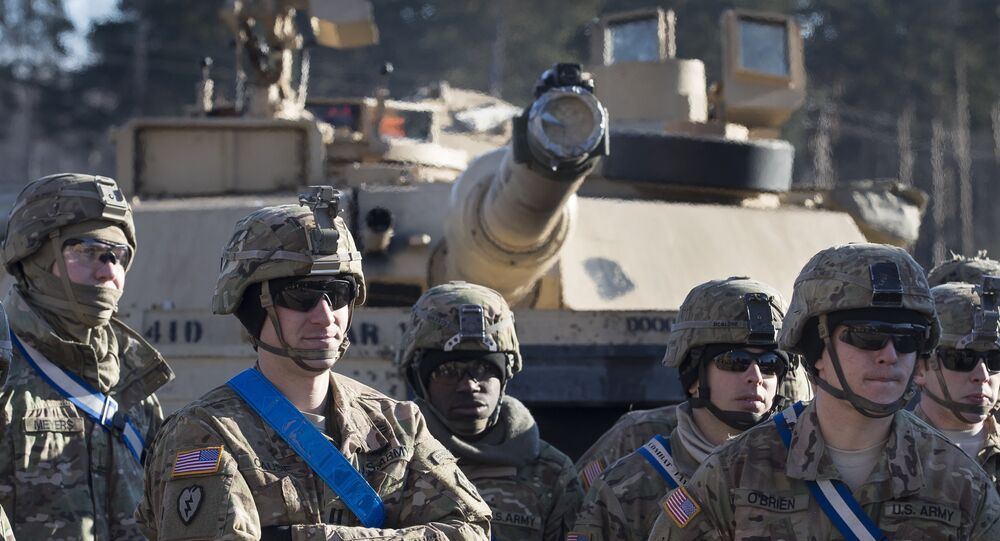 In 2021, Ukraine is hosting a series of NATO military exercises. Some perceive the drills as pouring gasoline over fire, since the host country still has an unresolved military conflict in Donbass.

It’s the grand opening of a war games season for Kiev. 11,000 NATO troops are being deployed to Ukraine to hold joint manoeuvres alongside some 21,000 local soldiers – all at the invitation of the country’s President Volodymyr Zelensky.

Largest NATO Drills in a Quarter of a Century

The war games, which are partially under way at the moment, will cover land, sea, and air. The maritime part features “Sea Breeze” – a simulation which will bring together 30 ships, 30 warplanes and 1,400 troops representing 27 nations. Prior to 2014, NATO staged “Sea Breeze” in Crimea, but even after the region re-joined Russia following a referendum, the scenarios haven't changed much and still revolve around the peninsula.

Ukrainian military personnel are also taking part in other manoeuvres - the “Defender Europe-2021”. The largest exercise of the kind in the past 25 years is being carried out simultaneously in 16 European countries, with the main locations being close to the Balkans and the Black Sea region.

© Sputnik / Sergei Malgavko
Moscow Says US, NATO Continue Provocations in Black Sea Region
During the first stage of “Defender Europe”, which is called “Swift Response”, 7,000 troops from 11 countries took part in missions across Eastern Europe – from Bulgaria to Romania, as well as in Estonia. The second stage of the drills is called “Immediate Response”. It includes shooting exercise for 5,000 soldiers from eight countries. Two more stages focus on anti-aircraft and anti-missile defence, as well as on setting up coordination between multinational forces.

In April this year, Aleksey Arestovich, the speaker of the Ukrainian representation in the so-called Trilateral Contact Group (TCG) on Donbass, said that “Defender Europe” is a “simulation of a war, an armed conflict with Russia”. He added that “The main focus is on the Balkans and Crimea, and, naturally – everything to the North of Crimea”.

When it comes to the possibilities of Ukraine joining NATO, the rhetoric of the alliance’s top brass remains oblique and cautious, with Secretary General Jens Stoltenberg saying that Kiev will have to “modernise and reform its security and defence institutions” first. But in reality, NATO is already in Ukraine and is pumping the country up with more and more weapons.

Indubitably, NATO’s expansionist policies are nothing new for Moscow. The alliance has been doing the opposite of what its leaders proclaimed regarding NATO’s eastward encroachment for decades, gradually increasing its military presence in Eastern Europe since 1991, and later accepting former Communist bloc nations as members.

But the full weight of criticism and the accusations of any global military-related wrongdoing were always twisted around by the Western mainstream media and politicians, and placed on Moscow. For instance, in April 2021, Russia was pressured by the US and Germany earlier this year for organising army drills on its own soil, dozens of tightly intertwined and significantly larger military manoeuvres involving Kiev were being organised by the West itself in the vicinity of Russia’s borders.

​Both warring sides in Donbass continue to accuse each other of ceasefire violations. But it’s likely that after NATO’s manoeuvres, more Western-made ammunition will appear in the shelling reports from the frontline.

According to the Russian MoD, advanced armaments and munitions delivered by NATO for holding the drills will eventually be supplied to Ukrainian nationalist formations in Donbass, adding more tension to the situation in the region.

While Ukrainian officials prefer to stick to their usual anti-Russian rhetoric while beefing up the military in the vicinity of Russia's borders under the guise of army drills, it appears that Kiev is slowly locking itself up within new political and military boundaries. These new boundaries are being set in Brussels and in Washington, while Moscow is still habitually portrayed by Ukrainian and Western media as the key villain and the main threat to Ukraine's sovereignty.

© Sputnik / Mikhail Markiv
US Reportedly Accuses Ukraine of ‘Mischaracterising’ Biden’s Words on NATO in Zelenskiy Phone Call
NATO leaders will be holding a summit in Brussels next week. But despite President Zelensky’s eagerness to integrate his country into the North Atlantic Treaty Organisation as soon as possible, it doesn’t seem that he will be getting any closer to achieving this goal anytime soon.

By now, it looks like Washington is not prepared to sanction such moves openly, possibly preferring to keep Ukraine as a bargaining chip, and an instrument for Biden’s administration to keep irritating Russia. But whether the Ukrainian people, who appear to have no say in this whole situation, really want such a role for their country remains to be seen.