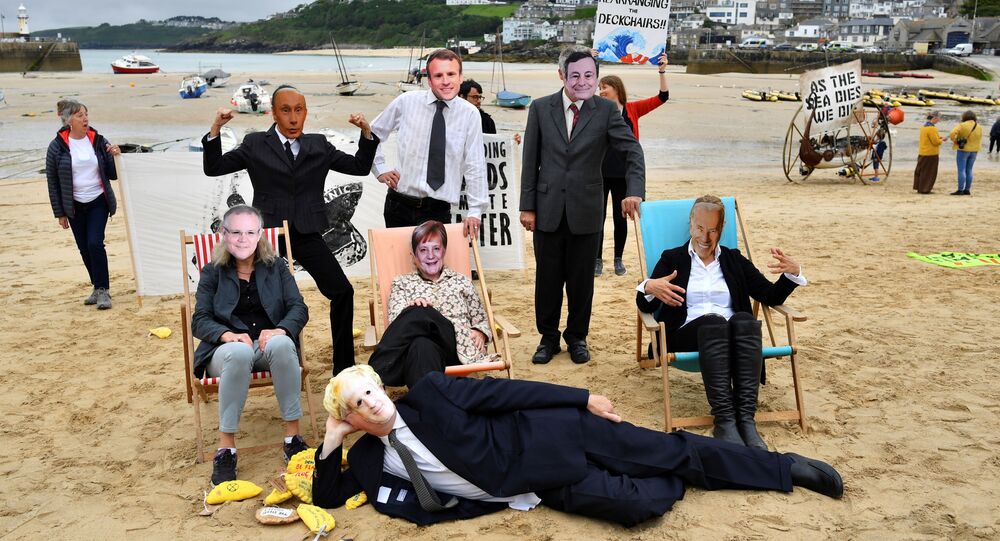 G7 Summit: Who Are the Seven Leaders, What Do They Want and How Long Will They Stay in Power?

The G7 group of wealthy nations are meeting in the English seaside resort of Carbis Bay this week. But who are the seven leaders, what have they come looking for, and how long will they remain in power?

This year Britain’s Boris Johnson is hosting the 47th summit of the G7, a grouping of the world’s wealthiest nations which was created in 1975.

It originally included Britain, France, Italy, West Germany, Japan and the US but Canada joined in 1976.

This year the leaders of four countries have been invited along either in person or on virtual links as special guests - India’s Prime Minister Narendra Modi, Brazilian President Jair Bolsonaro, Australian Prime Minister Scott Morrison and Moon Jae-in, President of South Korea.

But who are the G7 leaders, what do they want and how long will they lead their nations?

Boris Johnson became leader of the ruling Conservative Party and Prime Minister in the summer of 2019 after his predecessor Theresa May failed to push Brexit through Parliament.

In December 2019 his party won a resounding general election victory and pushed through Brexit and their handling of the COVID-19 pandemic has largely been approved of by voters, leading to them gaining Hartlepool, a stronghold of the opposition Labour Party last month.

The G7 summit is Johnson’s first chance to play the role of world statesman and his decision to invite India, Brazil, Australia and South Korea shows that he is keen to boost trade with other parts of the world now that Britain is free of the EU’s restrictions.

Johnson does not have to face the electorate again until 2024 and, having weathered the storm of a scandal over the refurbishment of his official apartment and open criticism by his former adviser Dominic Cummings, he will hope to be able to lead Britain into a new post-Brexit, post-pandemic world.

Joe Biden, who will turn 79 in November, has only been in the White House since January and this is his first G7 summit as President.

When he was Vice President between 2008 and 2016 he held the fort in Washington while Barack Obama was off charming the world’s leaders.

This time Kamala Harris is doing that job and Biden, an amiable but ancient soul, is gladhanding Boris Johnson, Angela Merkel and the others.

It’s the first official day of the G7 Summit here in the United Kingdom. I’m looking forward to reinforcing our commitment to multilateralism and working with our allies and partners to build a more fair and inclusive global economy.

Let’s get to work.

​Biden, who has Irish roots, has already made it clear to Johnson that - unlike his predecessor - he is fiercely committed to the Good Friday Agreement in Northern Ireland and will give London some serious grief if the post-Brexit protocol messes with it.

The response to the coronavirus pandemic is high on the agenda and Biden will be keen to smooth things over after the US was criticised for failing to fund the distribution of vaccines in parts of the world, like India and Brazil, where the virus is not yet under control.

Biden will also be stressing that White House policy has done a U-turn on tackling climate change since Donald Trump left office and Washington is now serious about driving down carbon emissions. In April Biden committing to halving US emissions by 2030.

Last but by no means least, on his agenda will be Biden’s insistence that China is the world’s number one bad guy and the US wants the other G7 countries to be allies against Beijing.

The other leaders will also be painfully aware that Biden will be 82 come the next presidential election and may well decide to step aside for Harris in 2024.

While Johnson and Biden both have the knowledge they have four years before they have to face the electorate, Macron has no such luxury.

He faces a presidential election in April 2022 and it is likely to be a tough and bruising contest.

Macron broke the mould when he was elected President in 2017 - he was the candidate of a party, La République En Marche!, which had only been formed 12 months before the election.

Most elections during the Fifth Republic have been fought between a Socialist and a candidate from one of conservative parties, UMP or RPR.

According to Politico’s poll of polls, Macron currently has a 58 percent disapproval rating and when French people would ask who they would vote for next year only 25 percent said Macron, three points behind the National Front’s Marine Le Pen.

Making vaccines a global public good. Vaccinate the world. Now. That is the responsibility of the G7. That is the ambition that France is carrying.

​After a tough year in which 110,000 people died from COVID-19 and thousands of businesses crashed as a result of the pandemic, Macron needs France to bounce back in terms of economy and general morale by April 2022.

So it was not surprising that he is pushing for patents to be waived when it comes to vaccines to boost immunity levels, something which puts him at loggerheads with Britain and Germany.

Angel Merkel has dominated German politics - and to some extent the European Union - for the past 16 years but her time is nearly up.

She steps down later this year as leader of the conservative Christian Democratic Union (CDU) and her successor, Armin Laschet, will lead the party into the next election on 26 September.

Germany’s Angela Merkel will visit the White House on July 15. This will be the third foreign leader to meet with Biden in person since the president took office, following visits from Japanese Prime Minister Yoshihide Suga and South Korean President Moon Jae-in.

​Merkel is due one last hurrah - on 15 July she will visit Biden at the White House - but the Carbis Bay summit is her last opportunity to try and influence the future of the world.

Merkel and Macron will team up to give Boris Johnson an ultimatum over the Northern Ireland Protocol.

But Merkel believes her legacy will be her policies on climate change and she will push that agenda again. Germany recently set out a promise to cut emissions to net-zero by 2045.

There is a palpable sense of relief from Canadian Prime Minister Justin Trudeau now that Donald Trump has left the White House.

The pair’s working relationship was non-existent but his relations with Joe Biden got off to the worst possible start when the Democrat cancelled the Keystone XL pipeline - which would have carried oil from Alberta to Texas - on the day of his inauguration, much to Trudeau’s chagrin.

Earlier this morning, Prime Minister Justin Trudeau departed for the @G7 Leaders’ Summit. Following the Summit, he will attend the #NATOSummit and the Canada-European Union Summit. Learn more: https://t.co/e0ydFTcObW pic.twitter.com/nKl0nAQS6i

​Canada’s reliance on oil from the tar sands of Alberta have meant it is the only G7 country to have increased emissions every year since the Paris Agreement.

In a statement last week Trudeau - who does not face an election until 2023 - said the G7 summit would focus on “finding coordinated approaches to promoting international rules and human rights, democracy, and gender equality.”

Italy’s last general election was in 2018 and Giuseppe Conte was prime minister, leading a centre-left coalition, until February this year when he handed over to Mario Draghi, an economist and former President of the European Central Bank.

Draghi leads a government of national unity which includes the right-wing Lega Nord and Forza Italia, the centre-left Democratic Party and the Five Star Movement, whose politics are difficult to define.

Welcome to Mario Draghi, Prime Minister of Italy, who has arrived in Cornwall ahead of the G7 Summit 🇮🇹#G7UK pic.twitter.com/ndm75MkCRa

​Draghi supported Joe Biden’s plan to set a minimum tax globally on conglomerates and described it as a “historic step towards a fairer and more equitable society for our citizens.”

It will be Draghi’s debut on the G7 stage and whether he is around next year depends on the national unity coalition.

Italian politics being what it is, it’s unlikely the coalition will survive until the next scheduled elections in 2023.

Italy may be the least powerful G7 nation but it does have a useful calling card - Rome has always had back channels to China, which may be deployed by the G7 in an effort to negotiate with Beijing while taking a hard line in public on issues like the Uighurs and Hong Kong.

In September last year Shinzo Abe, who had led Japan since 2012, resigned due to health concerns and was eventually replaced by veteran Liberal Democrat Party apparatchik Yoshihide Suga.

Suga, 72, took the decision to go ahead with the Olympics in Tokyo and will lead the LDP into October’s general election.

Dour and uncharismatic Suga is however an experienced political operator and international negotiator.

He will come under pressure this weekend to end government subsidies for the development of coal overseas and to invest in more renewable energy.

Japan will however be a powerful ally for Joe Biden’s arguments that China is the big danger, especially when it comes to its military and political ambitions in the South and East China Seas.