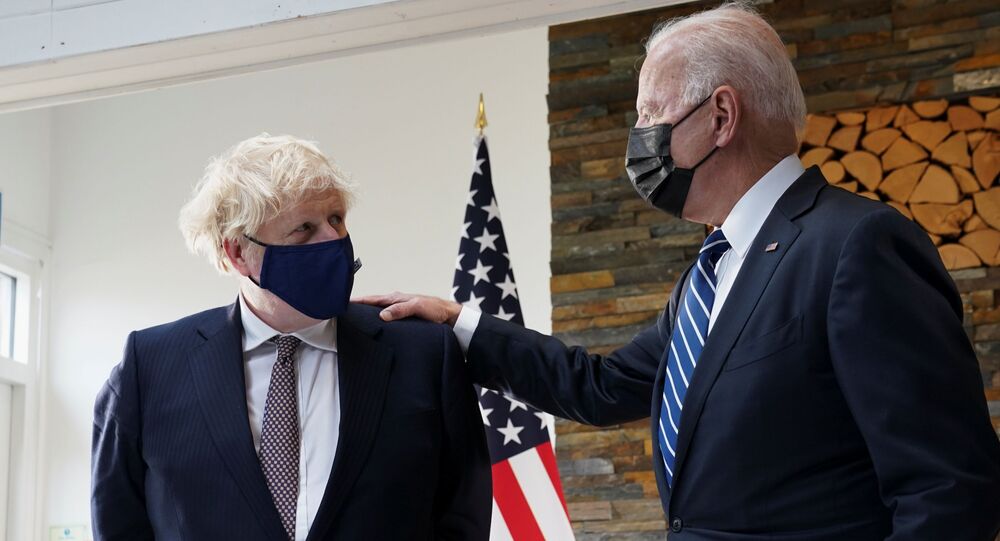 WASHINGTON (Sputnik) - US President Joe Biden and UK Prime Minister Boris Johnson issued a joint statement after a meeting on Thursday in which they vowed to further strengthen bilateral defence efforts.

“We commit to enhance further the world’s strongest bilateral defense, security and intelligence partnership to overcome the evolving threats of the twenty-first century,” the statement said. This includes threats and challenges associated with: cyberspace, foreign interference, harmful influence campaigns, illicit finance, violent conflict and extremism and terrorism in all its forms.”

The two leaders have committed to a global minimum tax of at least 15 percent.

“We commit to reaching an equitable solution on the allocation of taxing rights, with market countries awarded taxing rights on at least 20% of profit exceeding a 10% margin for the largest and most profitable multinational enterprises,” the statement quoting the two leaders said. “We also commit to a global minimum tax of at least 15% on a country by country basis.”

Biden and Johnson said they reiterated their commitment to effective arms control with an aim to have a world without nuclear weapons.

"As we maintain close alignment on our nuclear deterrence and modernization programs, we reaffirm our commitment to effective arms control and nuclear security, and to the goal of a world without nuclear weapons," the statement said. "We will draw on our extensive diplomatic, defense, security, civil and scientific cooperation to ensure Space is a safe and secure environment for all."

The United States and the United Kingdom have confirmed their commitment to the 1998 Good Friday Peace Agreement in Northern Ireland, the two leaders said on Thursday.

"Today, the United Kingdom and the United States reaffirm their commitment to working closely with all parties to the Agreement to protect its delicate balance and realize its vision for reconciliation, consent, equality, respect for rights, and parity of esteem," the leaders said in a joint statement.

The agreement has looked increasingly fragile as violence and protests have spread around Northern Ireland following a European Union move to limit the export of coronavirus vaccines into Northern Ireland in case they were then re-exported to the United Kingdom.

"It took a deep partnership between the UK, Ireland, and the US to support the people of Northern Ireland in bringing the Troubles to an end and it will take a continued and ongoing partnership to advance and safeguard Northern Ireland’s stability and prosperity into the future," the statement said.

Biden and Johnson said they remained fully committed to the 1998 agreement that established new democratic institutions in Northern Ireland, provided for consultation and cooperation across all of Ireland and created structures for British-Irish engagement.