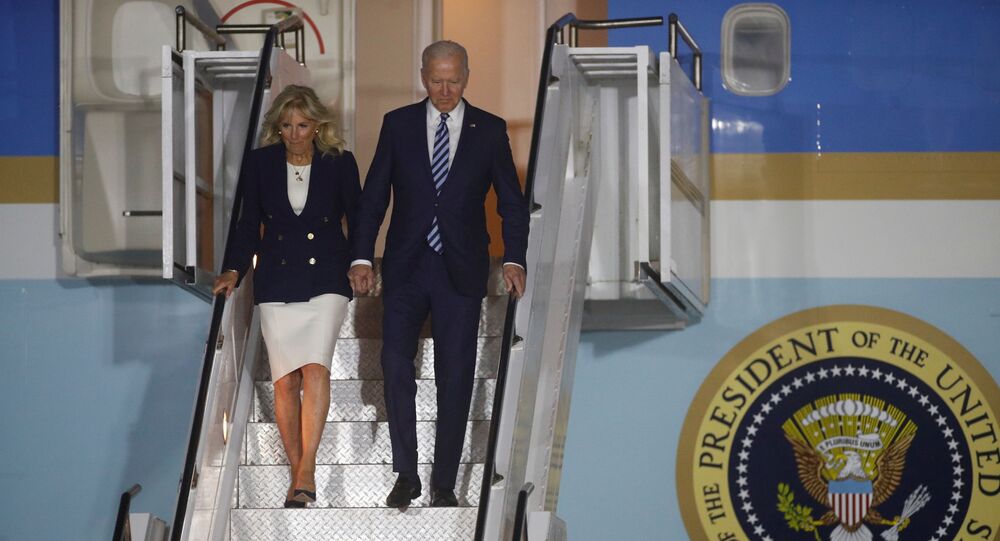 Earlier, as he spoke in Cornwall ahead of the G7 summit to be hosted by the UK, Boris Johnson expressed optimism over talks with the European Union on ironing out the Northern Ireland protocol issue, insisted that a compromise was “doable”, and that he was “not worried” about the issue overshadowing the G7.

Boris Johnson is reportedly to face pressure from US President Joe Biden on Thursday to resolve the contentious Northern Ireland Protocol issue that has marred ongoing post-Brexit trade talks between the UK and the European Union.

Biden is set to meet with Johnson in Cornwall ahead of the G7 summit scheduled for 11–13 June and hosted by the UK, which holds the G7 presidency for 2021. The US President flew to the UK on Air Force One, landing at the US airbase at RAF Mildenhall before heading on to Cornwall for Thursday’s talks with Johnson in Carbis Bay.

The 46th POTUS firmly believes in the Good Friday Agreement as the foundation for peaceful coexistence in Northern Ireland, Jake Sullivan, Biden’s adviser, was quoted by media as saying on Air Force One.

“That agreement needs to be protected, and any steps that imperil or undermine it will not be welcomed by the United States,” he said.

“President Biden is going to make statements of principle on this front. He is not issuing threats or ultimatums. He is going to simply convey his deep-seated belief that we need to stand behind and protect this protocol,” said Sullivan.

Biden believes the post-Brexit Northern Ireland Protocol is “critical” to ensuring that the Good Friday Agreement is protected, and the UK and the EU must continue negotiations to hammer out an acceptable solution, the adviser was quoted as saying.

Earlier, Sullivan was cited by the BBC as saying:

“But whatever way they find to proceed must, at its core, fundamentally protect the gains of the Good Friday Agreement and not imperil that. And that is the message that President Biden will send when he is in Cornwall.”

As the world builds back better from coronavirus, Cornwall will lead the way.#G7UK #G7Cornwall #BuildBackBetter

In response to the statement, the UK Prime Minister said he was “not worried” about the upcoming summit being overshadowed by the bitter row with the EU.

Johnson told broadcasters in Cornwall that he was “very, very optimistic” that a solution to the Northern Ireland Protocol issue is “easily doable”. Boris Johnson also weighed in on the recent statement made by Biden, who had vowed his meeting with the UK Prime Minister would “affirm the special relationship between our nations”.

The Atlantic magazine had reported Johnson told aides he does not like the seemingly “needy and weak” term.

Boris Johnson and Joe Biden will also set out their joint vision for a "sustainable global recovery" from the coronavirus pandemic when they meet for their first face-to-face talks on Thursday.

They are anticipated, according to UK media reports, to agree what has been billed as a new Atlantic Charter. It will be a reference to the declaration of post-war cooperation between Winston Churchill and President Franklin D Roosevelt in 1941.

According to Downing Street, the meeting between Johnson and Biden will focus on climate change, security, the global trading system and defending democracy. Efforts to coordinate how transatlantic travel can resume safely post-pandemic are also to be taken up.

At the G7 summit Boris Johnson will also likely face pressure from European leaders, as the EU earlier reiterated its threat to retaliate with trade sanctions if the UK unilaterally suspended parts of the so-called Northern Ireland protocol, which aims to avoid a hard border on the island of Ireland.

Maros Sefcovic, European Commission vice-president, was cited as saying he was convinced “European leaders will raise this issue” at the G7.

Following a four-hour meeting in London on Wednesday between UK-EU minister Lord David Frost and European Commission Vice President Maros Sefcovic, no breakthrough has been achieved.

Brussels continues to blame Brexit for the ongoing stalemate, with the EU concerned that goods entering its Single Market Area do not meet proper requirements.

UK and Brexit Minister Lord David Frost said London had a frank and honest discussion with the EU’s Sefcovic but claims the NI protocol is causing disruption.

“There weren’t any breakthroughs. There aren’t any breakdowns either and we’re going to carry on talking. What we really now need to do is very urgently find some solutions which support the Belfast Good Friday Agreement, support the peace process in Northern Ireland and allow things to return to normal,” Frost said.

Speaking after the talks, Sefcovic said that EU patience was “wearing very, very thin” with the UK over what Brussels sees as its failure to implement basic parts of the protocol.

Here are the UK statements about today's talks with the EU, principally on the NI Protocol.

No breakthroughs, but no breakdown either. But the issues are now becoming urgent and we now need to find solutions. https://t.co/JDqFDvHyNMhttps://t.co/bJgVXGXVG5

​The EU has already launched legal proceedings against Britain for unilaterally extending some grace periods  to the normal border checks implied under the protocol.

The UK-EU stalemate over the Protocol on Ireland/Northern Ireland in the Brexit Withdrawal agreement has been the greatest source of tensions since Britain signed a deal to exit the bloc.

It effectively set up a post-Brexit trade border between Northern Ireland and Great Britain (England, Scotland and Wales) in order to prevent goods checks along the Irish land border.

Keeping the Northern Ireland peace deal (the Good Friday agreement) was a priority during the Brexit talks, and ensuring that the land border between the Republic of Ireland (remaining in the EU) and Northern Ireland (in the UK) is open, unhampered by post-Brexit infrastructure-like border posts, was deemed a vital concession.

Some checks are taking place on British goods heading to Northern Ireland, causing a degree of disruption to food supplies and online deliveries.

It was agreed that the checks would be phased in through the use of so-called "grace periods", with the UK earlier this year unilaterally extending some of these, to the fury of Brussels. The next phase of new controls, affecting chilled meat products like sausages and mince, are due to begin next month.

Northern Ireland’s British unionists have strongly opposed the measure, which they believe weakens ties with the rest of the UK.

'I Keep Forgetting': Watch Biden Confess to Being Oblivious to His Presidential Status