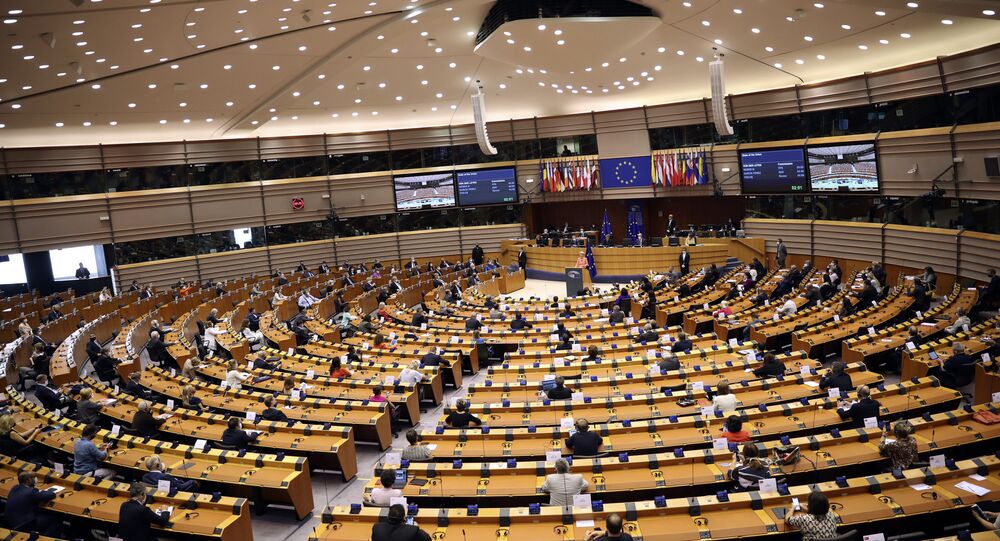 Earlier, Belarus made headline news around the world after a Lithuania-bound Ryanair flight was grounded in the nation's capital and saw Roman Protasevich, a Belarusian journalist who co-founded the banned Telegram channel Nexta, taken into custody. Authorities also detained his companion, Russian citizen Sofia Sapega.

The European Parliament is expected to soon convene an international conference that will focus its efforts on how best to settle the political crisis brewing in Belarus, it was revealed on Wednesday.

The initiative was detailed in a draft resolution that notes the conference would be dubbed "Future of Democratic Belarus," and would also investigate any offenses committed by Belarusian authorities against the public.

"The European Parliament calls on the [European] Commission and the VP/HR, together with international partners, to initiate the organisation of a high-level ‘Future of Democratic Belarus’ international conference on the resolution of the crisis in Belarus, and the investigation and prosecution of crimes by the Belarusian authorities against the people of Belarus," the draft resolution states.

Lawmakers are expected to vote on the resolution on Thursday, a move that will later serve as a non-binding recommendation fo members of the European Union. It's believed that officials with the Group of Seven, as well as other international groups may take part in the looming conference.

The resolution further calls for barring Belarus' diplomats from accessing any of the European Parliament's buildings in Brussels and for a revision on the exchange of information with the Belarusian embassy.

"The European Parliament calls on the Member States to improve their cooperation on intelligence matters regarding the crisis in Belarus and to expel known and suspected Belarusian intelligence officers active across the Union," the draft reads.

The draft is also calling for a full study on whether Russia played a roll in the Ryanair incident, in addition to the potential implementation of a fourth round of individual sanctions on Belarus, including other financial restrictions that would affect oil, potash, steel and wood-processing industries.

"The European Parliament calls on the Council to extend as soon as possible the lists of persons and entities under EU sanctions by including individuals and entities involved in the interception and forced landing of Ryanair flight FR4978 and the detention of [Nexta Telegram channel co-founder] Raman Pratasevich and Sofia Sapega; recalls that the journalist Raman Pratasevich is at risk of facing the death penalty ... Urges the Council to proceed with utmost urgency with the fourth package of sanctions against individuals and entities ... and to begin work on a subsequent package," the document continued.

© REUTERS / ANDRIUS SYTAS
A Ryanair aircraft, which was carrying Belarusian opposition blogger and activist Roman Protasevich and diverted to Belarus, where authorities detained him, lands at Vilnius Airport in Vilnius, Lithuania May 23, 2021.

"The European Parliament calls ... for consideration to be given to temporarily suspending Belarus from the [Society for Worldwide Interbank Financial Telecommunication] system." The SWIFT system is a network tapped by various financial institutions that allows individuals to securely and quickly send and receive information.

Russia has firmly rejected that it played any role in the May grounding of Ryanair flight FR4978. Kremlin spokesperson Dmitry Peskov previously informed reporters that the Russian government fully welcomes the International Civil Aviation Organization's investigation into the incident.

In the wake of the mid-May grounding, European leaders have prohibited any Belarusian aircraft from entering the bloc's airspace and airports, as well as barring any EU-based carriers from flying over Belarus' airspace.