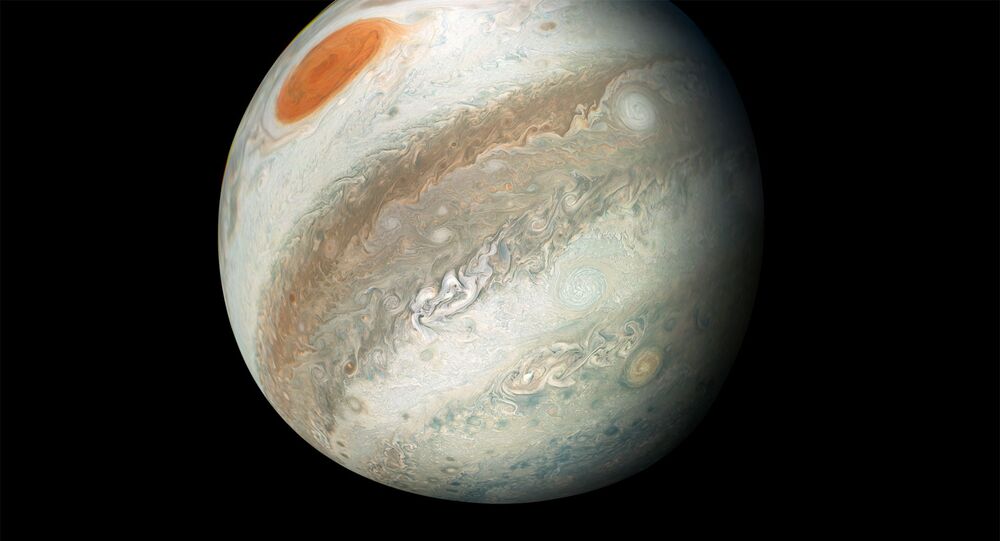 NASA's Juno spacecraft flew closer to Ganymede, one of Jupiter's four Galilean moons, than any other in more than two decades, offering dramatic glimpses of the icy orb. Juno is studying the interior and origins of the Sun's largest planet for the first time.

After orbiting Jupiter since 2016, the National Aeronautics and Space Administration's Juno spacecraft dashed past Ganymede, its largest Moon, on Monday, coming within 645 miles (1038 km). In just a few minutes, Ganymede went from being a distant point of light from Juno's vantage point to a round disk, then back to a point of light. However, it was enough time for the probe to snap five photos of the giant moon.

On Tuesday, the space agency released Juno’s first two pictures, highlighting Ganymede’s detailed structure. One shows the moon’s far side, opposite the sun. The photos – one from the Jupiter orbiter’s JunoCam imager and the other from its Stellar Reference Unit star camera – show the surface in remarkable detail, including craters, clearly distinct dark and bright terrain, and long structural features, possibly linked to tectonic faults.

​The spacecraft’s JunoCam visible-light imager, with its green filter captured almost an entire side of the water-ice-encrusted moon. Later, when versions of the same image come down incorporating the camera’s red and blue filters, imaging experts will be able to provide a colour portrait of Ganymede.

“This is the closest any spacecraft has come to this mammoth moon in a generation. We are going to take our time before we draw any scientific conclusions, but until then we can simply marvel at this celestial wonder,” said Juno Principal Investigator Scott Bolton of the Southwest Research Institute in San Antonio in a NASA press release.

Juno’s Stellar Reference Unit, a navigation camera that keeps the spacecraft on course, provided a black-and-white picture of Ganymede’s dark side (the side opposite the Sun) bathed in dim light scattered off Jupiter.

“The conditions in which we collected the dark side image of Ganymede were ideal for a low-light camera like our Stellar Reference Unit. So this is a different part of the surface than seen by JunoCam in direct sunlight. It will be fun to see what the two teams can piece together,” said Heidi Becker, Juno’s radiation monitoring lead at the JPL in a press statement.

The last time a spacecraft came that close was in 2000, when NASA’s Galileo spacecraft swept past our solar system’s biggest moon. Meanwhile, the Juno spacecraft will send more images from its Ganymede flyby in the coming days.

According to NASA, The solar-powered spacecraft’s encounter with the Jovian moon is expected to yield insights into its composition, ionosphere, magnetosphere, and ice shell while also providing measurements of the radiation environment that will benefit future missions to the Jovian system.