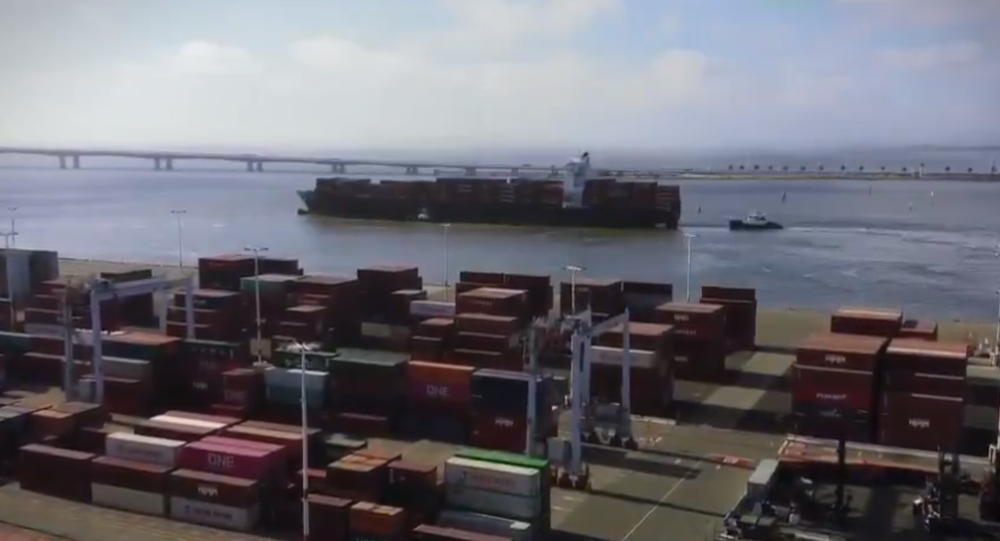 At several ports around the globe, Palestinian-solidarity activists have targeted Israeli-owned cargo ships, protesting outside the facilities in a bid to pressure dock workers not to unload the ships. The movement takes inspiration from several similar instances that took place during the 11-day war in Gaza last month.

On Saturday, the cargo ship Volans, contracted by Israeli shipping company ZIM, finally gave up after attempting for two weeks to land at the Port of Oakland, California.

According to the Act Now to Stop War and End Racism (ANSWER) Coalition, the group was just one of a vast array of activist groups that set up half a dozen picket lines to block port workers from unloading the Volans. ANSWER reported that the longshoremen of the International Longshore and Warehouse Union (ILWU) Local 10 refused to cross the picket line, forcing ZIM, which was losing millions of dollars per day sitting in San Francisco Bay, to try and unload elsewhere.

"Due to operational constraints and long delays in the port of Oakland, and in order to meet scheduled departures in the Far East, we will be calling on other US West Coast Ports until further notice," ZIM told Middle East Eye.

Footage of just 1 of 6 gates that community and workers held down in solidarity with Palestinian workers. We catch the moment the ZIM ship leaves the Port of Oakland!

​ZIM is considered the 10th largest shipping company in the world, carrying 1.6% of global cargo on 96 ships it either owns or charters. Based in Haifa, Israel, ZIM was founded in 1945 to facilitate the mass shipment of Jewish immigrants to the UK’s Palestine Mandate and, after 1948, the newly independent state of Israel.

ZIM’s official schedule for the Volans still says the ship was due to dock in Oakland on May 24 and cross the Pacific to Shanghai by June 26, but according to the Arab Resource and Organizing Center (AROC), the group that called the Oakland protest, Volans is now headed for Vancouver, Canada. There were already solidarity protests in Vancouver, but now AROC has put out a call for supporters to rally near the city’s port facilities on Tuesday.

“It warms our hearts in the besieged occupied Gaza Strip and the rest of occupied Palestine that our comrades led by AROC, and with the solidarity of our fellow workers in ILWU Local 10, achieved this great #BlockTheBoat victory against ZIM in Oakland,” Elias al-Jelda, member of the executive committee of the Palestine General Federation of Trade Union (PGFTU) in Gaza, said in a Sunday statement.

“We call upon all dockworkers worldwide to intensify the boycott campaign against ZIM ships and all business profiting from apartheid Israel, in solidarity with our people’s struggle for freedom and justice in Palestine,” the statement continued.

A similar incident happened in Oakland in August 2014, during Israel’s “Operation Protective Edge” campaign against Hamas in Gaza, but ILWU workers took a neutral position on the issue, and only refused to unload goods from the ZIM vessel Piraeus as long as protesters blocked them. When the Piraeus seemed to leave port only to return a few hours later and dock at a different terminal, the longshoremen unloaded the vessel, according to KPIX. However, the following month, protesters succeeded at blocking the ZIM Shanghai from unloading in Oakland. A third ship, ZIM Beijing, was deterred the following month by reports of protests while still at sea and skipped Oakland altogether.

#BlockTheBoat New York/Jersey held the first ever Palestinian solidarity action at the Port! Hundreds joined a community picket & blocked the entrance as part of the International Week of Action. World is making it clear that ZIM & Israeli apartheid are not welcome anywhere! #BDS pic.twitter.com/8Z2VQbqSY0

​In New York harbor on Sunday, another ZIM-owned ship, the Tarragona, met a similar protest, with hundreds of people joining a Block the Boat NY-NJ coalition and their own picket line outside the Maher terminal in Elizabeth, New Jersey. However, they failed to stop the Tarragona from unloading and it is now bound for Savannah, Georgia, according to ZIM.

Other protests have taken place in Houston, Texas; Tacoma and Seattle, Washington; and Los Angeles, California, although it’s unclear if all of them were targeting specific Israeli-owned vessels intending to dock there.

In early May, weeks of building tensions in Israel and the Palestinian territories exploded after Israeli police stormed Al-Aqsa Mosque on the final Friday of Ramadan, injuring more than 300 Palestinian worshippers and 12 police officers. When Hamas launched a barrage of rockets into Israel, the Israeli Defense Forces responded with airstrikes and artillery fire. In the 11 days that followed, more than 4,300 rockets were fired at Israel and more than 1,500 airstrikes bombed targets in Gaza. The attacks killed 12 people in Israel but more than 250 in Gaza, about 80 of whom were the Hamas militants Israel said it was targeting, according to local officials.

Protesters around the globe decried the one-sidedness of the conflict, particularly the large number of children killed, all but two of whom were in Gaza. In the US, UK, France, and other countries that support Israel, thousands took to the streets demanding their governments end that support and calling on Israel to end the war.

In Italy’s port cities of Naples and Livorno, the latter long known for its revolutionary leftist movement, dock workers refused to load a Singapore-flagged cargo vessel called Asiatic Island after discovering it was to be loaded with munitions bound for the Israeli city of Ashdod.

“Weapons and explosives that will be used to kill the Palestinian population already hit by a severe attack this very night which caused hundreds of victims among the civilian population, including many children,” L’Unione Sindacale di Base (USB) said in a May 14 statement. “Work is important, especially in these times, but this cannot make us close our eyes, or worse still, make us complicit in the continuing massacres of the civilian population.”

​Then on May 20, just hours before the ceasefire between Hamas and the IDF was announced, the South African Transport and Allied Workers Union (SATAWU) said its workers would not load the ZIM Shanghai, which was moored in the eastern port of Durban. The union said its decision followed an appeal by the local Boycott, Divestment and Sanctions (BDS) organization.

The BDS movement was formally initiated in 2005 by a group of Palestinian civil society organizations who were inspired by the international movement in the late 20th century that put pressure on South Africa to end its Apartheid system of racial stratification that relegated Black Africans to second-class citizenship. However, pressure to boycott Israeli-made goods had began as early as 2001, after the Second Palestinian Intifada broke out.

The movement calls for supporters to refuse to buy Israeli goods or goods made by companies that operate in the West Bank or East Jerusalem, to pressure companies to divest from operations in those territories, and to pressure governments to put sanctions on Israel to pressure it into changing its policies that go against international law, such as the evictions of Palestinian families and construction of settler colonies in the territories.

In recent years, an anti-BDS movement has emerged claiming that BDS is anti-Semitic, and a number of laws in US states and other countries bar government institutions or officials from supporting BDS. BDS supporters reject the claim their movement is anti-Semitic, saying they are protesting policies of the Israeli state, and not Jews nor Judaism.

Recently, independent journalist Abby Martin won a federal court case in Georgia, successfully challenging a 2016 law that would have required her to forswear boycotting the state of Israel as a condition of her participation at a Georgia Southern University event. The court found that her boycott is protected speech, and that the government had no basis to compel speech from her in the form of an oath.