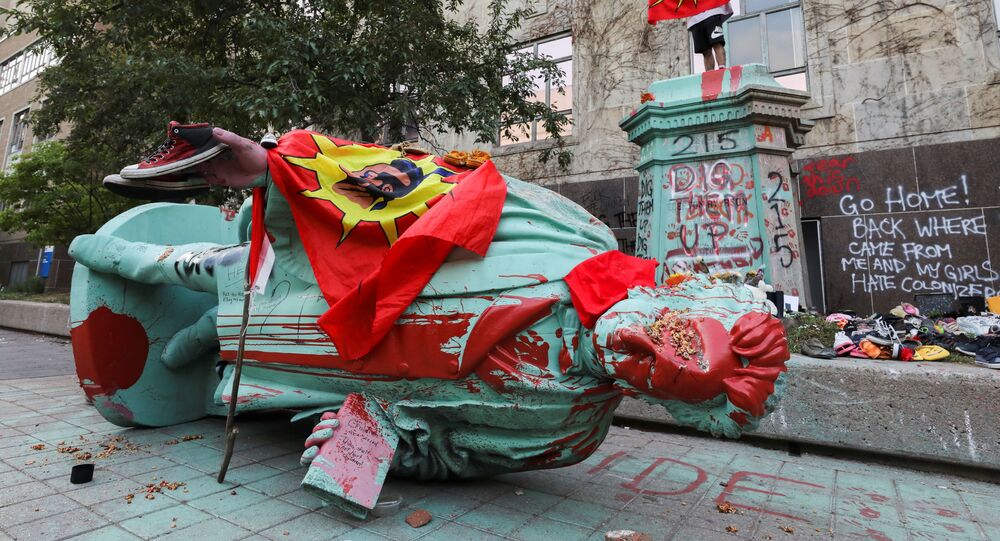 Egerton Ryerson contributed to the design of the system of residential schools in Canada - free boarding schools for indigenous children. The system, ostensibly created to assimilate indigenous children into Canadian culture, is criticized for removing children from their families, exposing them to violence, and even killing them.

On Sunday, protesters toppled a statue of Egerton Ryerson, the architect of the Canadian system of residential public schools for indigenous people, located near Ryerson University in Toronto.

The statue ended up on the ground after the discovery of the remains of 215 indigenous children at the site of the Kamloops Indian Residential School - a finding that caused a public uproar, with the statue of Ryerson sprayed with red paint and defaced.

The backlash echoed throughout the university as well, as some students and professors reportedly went to change their email signatures from Ryerson to "X University", calling to remove the name of Ryerson.

Video posted on social media shows the moment the monument, captured with a chain, is pulled to the ground.

What a beautiful site to see on a Sunday evening.

A couple decades too late, but the Egerton Ryerson statue has been desecrated and toppled over.

Throw it in the lake, rename the school, reconcile with the truth.#TruthAndReconciliation

​The discovery of children's remains at the site of the residential school, located in British Columbia, was announced in late May, by the indigenous Tk'emlúps te Secwépemc community. The findings sparked a movement by activists against the figure of Egerton Ryerson, with the university named after the educator issuing a statement on 4 June acknowledging the situation and launching an investigation.

"I share the profound grief and sorrow felt by our students, faculty, staff and alumni at these revelations, and extend support to Indigenous communities at the university", Mohamed Lachemi, President and Vice-Chancellor of the Ryerson University stated. "An important part of our university’s reconciliation involves the legacy of our namesake Egerton Ryerson and the establishment of residential schools. In November, the Standing Strong (Mash Koh Wee Kah Pooh Win) Task Force was established with a clear mandate to examine the facts of that legacy, to consult widely and openly, and to develop principles and recommendations that our university can take to respond to that legacy."

The statement was shared by Toronto police, which, reacting to the Sunday incident, outlined that, despite "a traumatic impact" of the "recent events", acts of violence and vandalism cannot be tolerated.

Please note the @RyersonU statement. While we appreciate that recent events have had a traumatic impact, we cannot tolerate acts of vandalism/violence. Officers will be on site to ensure the safety of everyone involved and will investigate/enforce as necessary. https://t.co/TQsicsGPps

As the movement against racism has intensified recently in countries like Canada, the United States and others, activists particularly target statues of figures they believe to be controversial, in terms of racial injustice. The wave of monument toppling was particularly intense in 2020 when the statue of John A. Macdonald, Canada's first prime minister, was defaced in August, and the monument of Spanish conquistador Sebastian de Belalcazar saw the same fate later in September.

What Does Ryerson Have to Do With All of It?

According to The Canadian Encyclopedia, Egerton Ryerson was a Methodist minister and educator in Canada in the 19th century who "established a system of free, mandatory schooling at the primary and secondary level — the forerunner of Ontario’s current school system". He specifically believed that poverty should not be a roadblock to education and insisted that the country have a free and mandatory public school system.

Despite being a vocal advocate of free and compulsory education, Ryerson was involved in the design of the system of residential schools and believed that indigenous and non-indigenous students should have different education systems.

The controversy around Ryerson's figure started before 2021. In 2010, the Ryerson University issued a statement acknowledging both the pioneering role of Ryerson in the country's education system and his participation in the "abusive" system of residential schools, dubbing the latter "a harmful error". Calls to remove his name and statue from the university first emerged in 2017, voiced by the students' union.

Sam Howden, one of the organizers of X University and a member of the university's Indigenous Student Association, said that the Sunday demonstration in Toronto that ended with the toppling of the statue was not vandalism.

"It was not some kind of criminal act. It was to bring attention to the violence that has been endured by many different folks because of Egerton Ryerson", he said, cited by CP 24. "I would like this to be a sustainable thing where we see change at the institutional level – to take away the name, to take away the statue, and have a larger conversation about colonial violence and white supremacy in this country and start doing those mechanisms."

The sentiment was not shared by all - at least at the time when the first calls to "cancel" Ryerson emerged. Donald Smith, professor emeritus of history at the University of Calgary, said in a 2017 column published in The Globe and Mail that he did not believe Ryerson should receive "an anti-indigenous label".

Smith suggested that the educator "was not the creator of the Indian residential school system" but only wrote "a short report on Indian boarding schools where older male students could learn European-style agriculture". The professor also claimed that Ryerson had a good relationship with the Mississaugas of New Credit - one of the First Nations communities in Ontario.

A similar opinion was also voiced in a 2021 column by Ron Stagg and Patrice Dutil for The National Post, with the authors particularly noting that Ryerson was given his own name in the community.

"He was not a racist and he did not discriminate against Indigenous people. It was the exact opposite! As a young man he was appointed to the Credit mission, home of the Mississaugas", the op-ed reads. "In fact, it was in recognition of his services to the Mississauga, that Ryerson was adopted and given the name of a recently deceased chief, “Cheechock” or “Chechalk.”