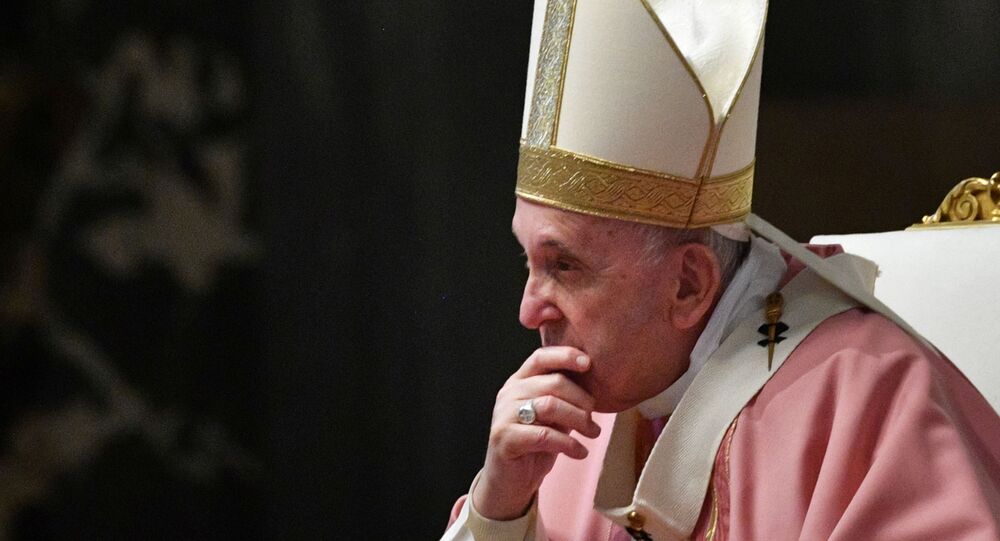 The gruesome discovery was made at a former boarding school, where Canadian authorities forcibly took indigenous children to assimilate them into "European cultural practices" since the 19th century.

The head of the Roman Catholic Church, Pope Francis met with both Vatican-based Canadian cardinals on Saturday and expressed his sadness over the Kamloops Indian Residential School tragedy.

"I follow with pain the news coming from Canada about the shocking discovery of the remains of 215 children", he said, following Sunday prayers in Saint Peter's Square.

He stressed that Canadian politicians and religious leaders should "cooperate with determination" to investigate the details of the finding and to seek reconciliation and healing for the nation.

"I unite with the Canadian bishops and the entire Catholic Church in Canada in expressing my solidarity with the Canadian people traumatised by this shocking news. The sad discovery further increases awareness of the pain and suffering of the past", he added.

© REUTERS / DENNIS OWEN
A woman reads cards of condolences tied to a tree next to a monument to the survivors of the former Kamloops Indian Residential School, after the remains of 215 children, some as young as three years old, were found at the site in Kamloops, British Columbia, Canada May 29, 2021.

According to the Tk'emlups te Secwepemc Nation, a native Canadian group, the remains belong to the children who were pupils at the Kamloops Indian Residential School in British Columbia, which was shut down in 1978. The former indigenous boarding school in Canada was run by the Catholic Church. Some of the victims were no older than 3 years, but none of them has been identified so far, and the cause of their deaths remains unclear.

Canadian PM Justin Trudeau and members of his government expressed shock and promised a thorough investigation into the grim finding.

Various estimates suggest that from the 1840s to the 1990s up to 150,000 children were taken by force from indigenous families in Canada and sent to educational facilities around the nation.