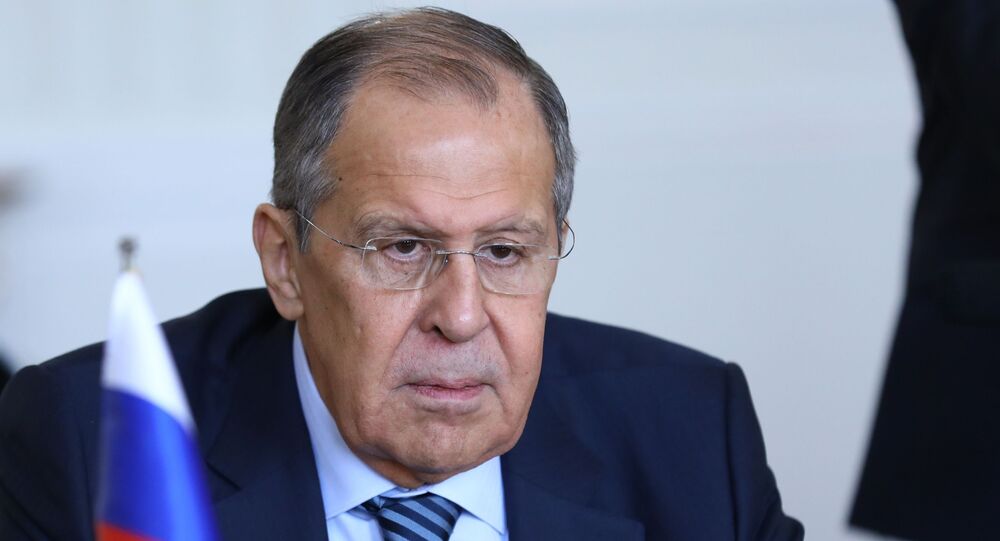 MOSCOW (Sputnik) - Russia has no illusions that breakthroughs will be achieved or historical decisions will be made after the June 16 meeting between Russian President Vladimir Putin and his US counterpart, Joe Biden, Russian Foreign Minister Sergei Lavrov said on Tuesday.

"As for the upcoming summit in Geneva on 16 June of the presidents of Russia and the United States, we are not creating illusions, we are not trying to create the impression that there will be some breakthroughs, some historic fateful decisions, but the very fact of a conversation between the two leading nuclear powers at the level of top officials, of course, is important, this needs to be supported in every possible way," Lavrov said at a press conference.

Russia’s top diplomat added that both sides need to exchange views on what threats they see "around by their countries, and in general in the global arena".

Moscow is ready to resume the work of the Russia-NATO Council, Lavrov said.

"When we are called upon to meet with our colleagues from the North Atlantic Alliance, to resume the activities of the Russia-NATO council, we say: ‘Yes, we are ready. ’ First of all, let the military begin to talk about what the real situation on the ground is now, including taking into account the gross violation by our NATO colleagues of the agreements concluded in the late 90s that NATO will not deploy significant military forces on territories of new members," the foreign minister said at a press conference.

Lavrov added that Moscow sees no "added value" in the discussion of Ukraine within the framework of the Russia-NATO Council.

According to Lavrov, NATO seems to have some mischievous intentions regarding Russia, as its members do not appear eager to reaffirm some of the past commitments, Russian Foreign Minister Sergey Lavrov said Monday.

"Stopping NATO from approaching the borders of the Russian Federation is one of the obligations that NATO undertook. We are used to the fact that our Western colleagues, having agreed to many good obligations in the 1990s, then begin to simply ignore them," Lavrov said.

When Russia suggests reaffirming commitment to those obligations, such as the idea that nobody in the Euro-Atlantic area should boost their defences if it is to the detriment of other countries, NATO countries seem to be "scared of reaffirming," Lavrov said.

"The conclusion is very simple — it appears that they have some kind of malicious plans against Russia. I want to be wrong about that," the minister said.

On the Future of JCPOA

Some progress has been made on the talks about the revival of the Joint Comprehensive Plan of Action, but there remain issues that require political decisions from the parties to the Iran nuclear deal, Lavrov said.

Iran’s top negotiator Abbas Araqchi said Monday that the fifth round of talks was difficult and unlikely to be the last.

"Negotiations are underway and significant progress has been made, but no final decision has yet been made. There remain issues that require political decisions in the capitals of the most interested states, first and foremost the United States and the Islamic Republic of Iran," Lavrov said at a press conference after BRICS Ministerial Meeting.

Russia and other parties to the deal are trying to "create the most favourable conditions possible so that a final solution can be found," the minister continued.

"I think it's counterproductive now to speculate whether this will happen in the next few days or in a couple of weeks. The negotiators in Vienna are working with the goal of achieving a result as soon as possible," Lavrov said.

Iran has scaled back its commitments under the agreement to produce purer uranium after the US quit the pact in 2018 and reimposed crippling sanctions on Tehran. Since then, the US has elected a new president, and the talks on restoring the JCPOA began. Iran wants all economic curbs lifted before agreeing to any concessions. Meanwhile, US President Joe Biden said he believed that Tehran was serious about the ongoing talks, but "how serious" was still unclear.

On Speculations About COVID-19 Origin

BRICS countries believe all questions regarding the origin of the coronavirus should be discussed under the WHO and all attempts to politicise the pandemic, including vaccines, must be stopped, Russian Foreign Minister Sergey Lavrov said on Tuesday.

"We all, at least the BRICS countries, support the central role of the World Health Organization in this area of international cooperation... If anyone has additional questions [regarding the origin of the coronavirus], they should be discussed with all the other countries within the World Health Organization," Lavrov said at a press conference after the virtual BRICS Ministerial Meeting.

He expressed regret that attempts were made to politicise the current situation and that China and Russia were blamed for them.

"Of course, it is what President Macron called the 'war on vaccines.' But to our great regret and contrary to the facts, he has declared Russia and China to be the main instigators of this so-called new world war," the foreign minister noted.

Lavrov further urged international partners to refrain from using the pandemic to "score political points" and speculate about the virus or the vaccines registered with the WHO.

"It is obvious that we need to unite our efforts and focus not on finding the culprits, but on dealing with the problem that is truly global and affects all countries," Lavrov stressed.