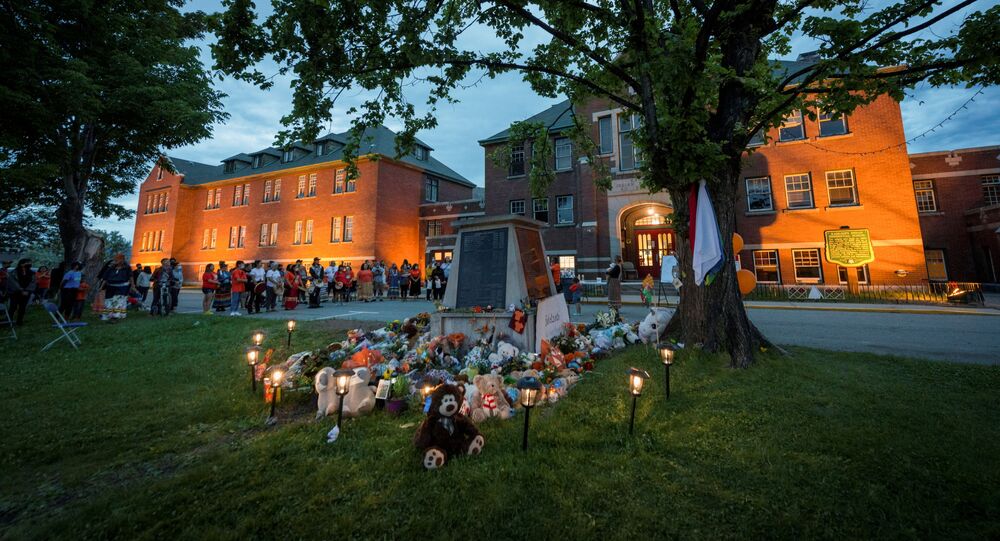 MOSCOW (Sputnik) - Canadian politicians have joined the calls of indigenous leaders for a thorough investigation of every former residential school in the country after the remains of 215 children were found at an indigenous school site in the province of British Columbia.

On Monday, National Chief of the Assembly of First Nations Perry Bellegarde urged the authorities to launch a probe into all former residential school sites, noting that indigenous survivors have long been trying to draw attention to the issue but nobody believed them.

"It was genocide and it is ongoing; for the 215 children we lost, survivors of residential schools and the future of Indigenous children, PM Trudeau must go beyond words. He must immediately end all legal actions against indigenous children and survivors fighting for their rights," the leader of the New Democratic Party Jagmeet Singh tweeted on Tuesday.

During his address on Monday to the members of the Tk'emlups te Secwepemc community, where the school was located, Singh called on the government to step up efforts and investigate the case thoroughly, noting that if this had happened elsewhere in the world, Canada would demand an international investigation, the CNN broadcaster reported.

"When we think about our children, being torn from us, by the state, sent to who knows where, to be told to be 'good, White, people,' it's unimaginable to us today," Horgan said in an address to the legislature on Monday, as cited by CNN.

The Tk'emlups te Secwepemc First Nation announced last week that a deep scan of the Kamloops Indian Residential School site with ground-penetrating radar confirmed the discovery of the remains. According to the community, some of the deceased were as young as three years old.

© AP Photo / Sayyid Azim
Mass Grave Discovered in Rwanda May Contain Remains of 30,000 Genocide Victims - Officials
The school was one of the largest in Canada and operated from the late 19th century through the late 1970s as part of the residential school system, which placed indigenous children in state-sanctioned boarding schools, where they were to be culturally assimilated.

According to Canada's Truth and Reconciliation Commission report, released in 2015, roughly 150,000 aboriginal children were forcibly assimilated through the residential schools from 1883 to 1998, in a process which has been equated to "cultural genocide".

The report discovered that around 3,200 died in the schools, with the greatest number of deaths taking place before 1940. Schools also had a high number of tuberculosis cases and other health incidences in the late nineteenth and early twentieth centuries, with death rates remaining high until the 1950s.