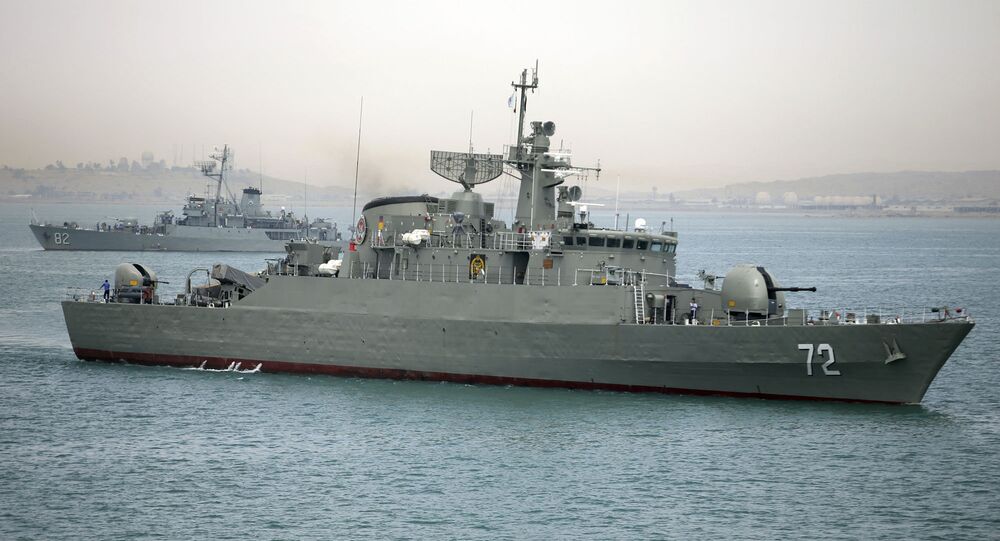 Iran Warns Against 'Miscalculations' After Reports About Allegedly Venezuela-Bound Warships

An earlier Politico report claimed that US national security officials were closely monitoring the movements of two Iranian naval vessels - a frigate and a former oil tanker, the Makran, - which were believed to be heading for Venezuela.

The Iranian Foreign Ministry has responded to media reports about two Tehran-flagged warships believed to be heading for Venezuela, underscoring that the Islamic Republic is entitled to freedom of navigation.

“I warn that nobody should make a miscalculation. Those who live in glass houses must be cautious.”

The Foreign Ministry’s response was triggered by an earlier report that claimed, citing sources, that the US national security officials were monitoring two Iranian military vessels whose ultimate destination might be Venezuela.

The Politico report claimed that an Iranian frigate and the Makran, a 755-foot long former oil tanker that was converted to a floating forward staging base vessel allegedly able to accommodate six to seven helicopters, as well as drones, had been southward bound along the east coast of Africa.

Makran, stated the report, could be used as a platform for electronic warfare and special operations missions.

The report added that if, indeed, Venezuela was the vessels’ destination, officials within the government of President Nicolás Maduro had already been advised against welcoming the Iranian warships.

The developments came as Iran and Venezuela – two pariah states struggling under US-imposed sanctions - forged closer cooperation over the past few years.

The United States slapped sanctions on Venezuela after it was plunged into political chaos in January 2019.
At the time, the then-head of the opposition-controlled National Assembly, Juan Guaido, proclaimed himself interim president, seeking to oust democratically reelected President Nicolas Maduro from power.

Washington and most Western countries endorsed Guaido, while Russia, China, Turkey and several other nations supported Maduro, who has repeatedly denied US allegations of election fraud.

President Maduro blamed Washington for attempts to overthrow the Venezuelan government governed by a desire to seize the country's natural resources.

The US reinstated its restrictive measures against Iran in May 2018, when then-President Donald Trump unilaterally scrapped the 2015 Iran nuclear deal, also known as the Joint Comprehensive Plan of Action (JCPOA).

Cooperation between Iran and Venezuela, which have a decades-long relationship, has currently ranged from gasoline shipments to joint car and cement factory projects.

As Venezuela, home to the world’s largest oil reserves, is gripped by a deepening economic crisis and fuel shortages, the Islamic Republic has sent multiple tankers to the South American nation.

In exchange, the government of Nicholas Maduro has been reportedly supplying Tehran with much-needed cash.

Current developments also come against the backdrop of Vienna talks, started in early April, seeking to revive the 2015 agreement to curb Iran’s nuclear program, the Joint Comprehensive Plan of Action.

US President Joe Biden’s predecessor, Donald Trump, withdrew from the accord unilaterally in 2018.
As the fifth round of multilateral negotiations kicked off on Monday, Iran’s Foreign Ministry said that “there should be no rush in Vienna talks”.

“We are pursuing these talks with the necessary focus and attention to detail,” said the Ministry’s spokesman Saeed Khatibzadeh, adding that “Negotiations have reached a key stage.”

The two main issues are Iran’s return to the limits set by the agreement in terms of its nuclear activities and for Washington to lift sanctions imposed by the Trump administration after it left the JCPOA.