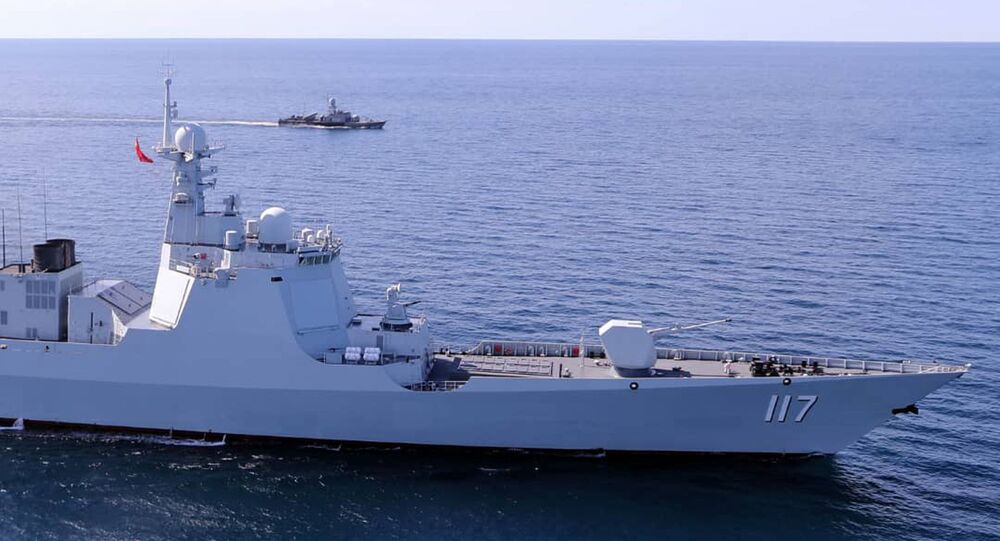 Iran and Venezuela, two nations that have been shackled by Washington’s sanctions, have sought to deepen their decades-long relationship, with Iran’s shipments of gasoline to the struggling South American nation hailed by President Nicolás Maduro last year as an example of “the brotherhood of free peoples”.

US national security officials are reportedly closely monitoring the movements of two Iranian naval vessels which are believed to be heading for Venezuela, according to Politico.

A frigate and a former oil tanker, the Makran, converted to a floating forward staging base and commissioned this year, have been heading south along the east coast of Africa, the outlet cites sources as saying.

Iranian media reports suggest the 755-foot long Makran has been touted by the Islamic Republic’s officials as capable of offering a platform for electronic warfare and special operations missions due to its missile and weapons capabilities. The vessel can allegedly accommodate six to seven helicopters, as well as drones.

No information is readily available regarding either the cargo on board or the ultimate destination of the vessels.

However, officials within the government of Venezuelan President Nicolás Maduro have purportedly already been advised against welcoming the Iranian warships, the report claims.

While a Thursday report cited US military officials as claiming the vessels had turned around, Friday morning data supplied by the sources suggested the Iranian ships were still heading south.

US lawmakers were believed to have been informed by intelligence officials over the past few days that the Iranian ships may be heading toward Venezuela.

If, indeed, their destination turns out to be the South American nation, the move is likely to be interpreted as provocative amid tense US-Iran relations, states the outlet.

There have been no official comments on the report from either the Venezuelan Foreign Ministry or the White House.

Over the past few years Iran and Venezuela have forged closer cooperation as they struggle to contend with withering US sanctions.

In January 2019, Venezuela was plunged into a political crisis when the then-head of the opposition-controlled National Assembly, Juan Guaido, proclaimed himself interim president in a bid to oust the democratically reelected President Nicolas Maduro from power.

The United States and most Western countries endorsed Guaido, slapping stifling sanctions on the South American country. Russia, China, Turkey and several other nations have been supporting Maduro, who has repeatedly denied US allegations of election fraud, and accused Washington of attempting to overthrow the Venezuelan government to seize the country's natural resources.

As far as Iran is concerned, the US reinstated its restrictive measures against the Islamic Republic in May 2018, when then-President Donald Trump announced Washington's unilateral withdrawal from the 2015 Iran nuclear deal, also known as the Joint Comprehensive Plan of Action (JCPOA).

A year later, Tehran announced it had begun suspending some of its JCPOA-related obligations. The administration of President Joe Biden administration has emphasized that anti-Iranian sanctions will only be lifted after the Middle Eastern nation comes back into compliance with the nuclear deal.

Cooperation between Iran and Venezuela, according to reports, has ranged from gasoline shipments to joint car and cement factory projects.

Venezuela and Iran have a decades-long relationship. Under the government of Hugo Chávez, Maduro’s predecessor, who became president in 1999 and died in 2013, Iranians ran car factories and cement plants, and built thousands of homes in the South American nation.

The Islamic Republic has sent multiple fuel tankers to Venezuela, as sanctions have impeded the Latin American nation’s state-owned oil giant Petroleos de Venezuela SA, PDVSA’s ability to upgrade outdated equipment needed to extract heavy blends of oil and refine it into gasoline. The latter has resulted in a deepening economic crisis and triggered fuel shortages in Venezuela.

© AP Photo / Juan Carlos Hernandez
In this May 25, 2020 file photo, the Iranian oil tanker Fortune is anchored at the dock of El Palito refinery near Puerto Cabello, Venezuela

In exchange, Venezuela’s government has been reportedly supplying Tehran with much-needed cash.

The developments come as the administration of President Joe Biden has been seeking to rejoin the 2015 agreement to curb Iran’s nuclear program, the Joint Comprehensive Plan of Action. His predecessor, then-President Donald Trump scrapped the deal unilaterally in 2018.

Vienna is currently the venue of ongoing talks between the sides that are set to enter the fifth round, with Iran agreeing to a one-month extension of a temporary inspections agreement with the International Atomic Energy Agency (IAEA). The latter will allow UN inspectors continuous access to nuclear sites in Iran until 24 June.

However, senior Republican senators have joined some democrats in voicing criticism of Biden’s attempts to revive the Iran Nuclear Deal.

The recent violence between Israel and Hamas Islamist movement, backed by Iran, also has fueled criticism over re-embracing the JCPOA.