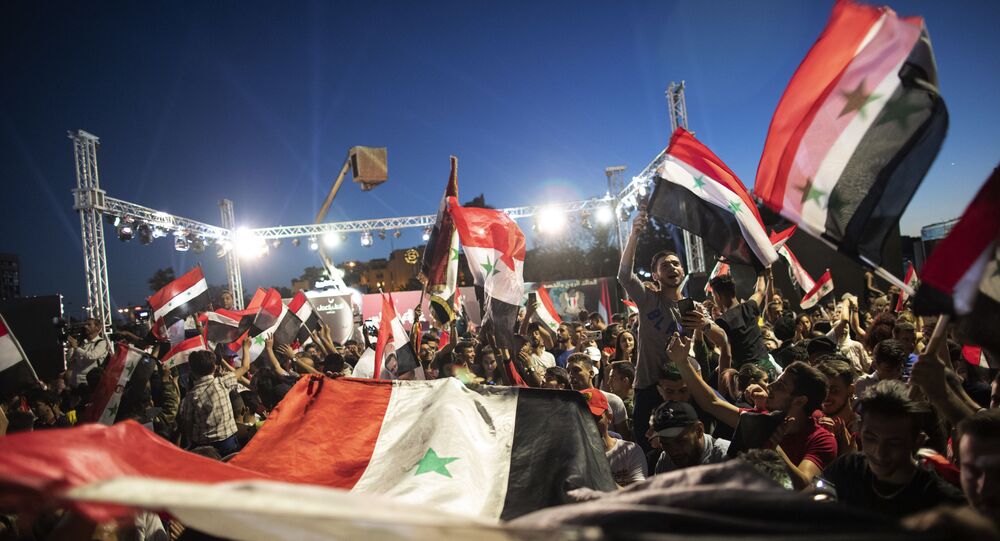 MOSCOW (Sputnik) - The Russian Foreign Ministry qualified on Friday Syria's presidential vote as an important step toward strengthening stability in the Middle Eastern country, and also slammed Western claims about illegitimacy of the election as political pressure.

"We regard the election as a sovereign affair of the Syrian Arab Republic and an important step toward strengthening its domestic stability. We proceed from the fact that a normal functioning of state institutions on the basis of Syrian legislation serves the interests of all Syrians, especially considering the ongoing armed fight against terrorists", the Russian Foreign Ministry said in a statement.

© REUTERS / Omar Sanadiki
A poster depicting Syria’s president Bashar al- Assad is seen as supporters of of Syria's President Bashar al-Assad celebrate after the results of the presidential election announced that he won a fourth term in office, in Damascus, Syria, May 27, 2021.

The ministry qualified Western claims about illegitimacy of the vote, in some cases made even before the election, as "an element of rude political pressure on Damascus and another attempt of interference in Syria's internal affairs, aimed at destabilising it".

At the same time, the Kremlin said the Syrian president managed to avoid a major collapse of the nation.

"I believe the most valuable achievement in the past four or five years in Syria is that ... they managed to avoid a catastrophe, they managed to avoid surrendering the country entirely to Islamists and terrorists, and this was done with a lot of help from our country", Russian presidential spokesman Dmitry Peskov told reporters.

The Syrian parliament announced overnight that Bashar al-Assad has won his fourth term in office after claiming 95.1 percent of the votes, gaining support from over 14 million citizens, while the turnout that reached over 78 percent.