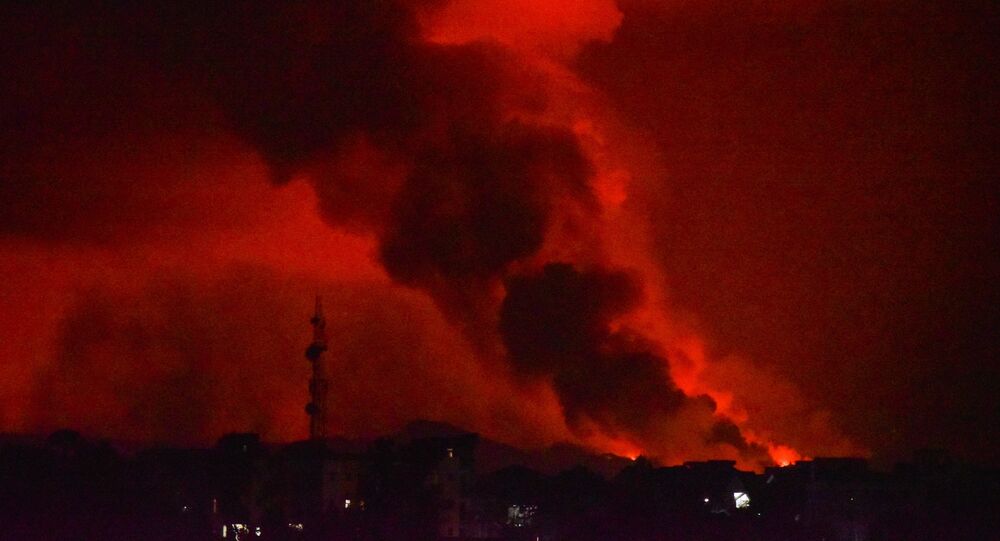 MOSCOW (Sputnik) - The Nyiragongo volcano in the eastern region of the Democratic Republic of Congo, on the border with Rwanda, has begun to erupt, Rwandan broadcaster RBA reported on Saturday, citing eyewitnesses.

The eruption is visible from the Rwandan city of Rubavu, located near the border with the DRC. According to AFP, flashes of light coming from the crater of the volcano are noticeable from the Congolese city of Goma.

Eyewitnesses report that they can smell sulfur in the air. Lava flows have not yet been seen. The power supply in the city was cut off, and some residents have begun to leave their homes and head towards the border with Rwanda, the AFP said.

Video and photos shared on social media show moments of the eruption, with fire breaking out of the volcano and the sky illuminated with orange flames.

#Nyiragongo is erupting now! Pray for people in surroundings pic.twitter.com/URstki8ciA

Mount Nyiragongo—a volcano in eastern Democratic Republic of Congo has erupted,@ReutersAfrica quotes a volcanologist in the nearby city of Goma

In 2002, Nyiragongo erupted killing 250 people and making 120,000 homeless after lava flowed into Goma

​One of the videos show rivers of lava flowing out of the volcano.

Mt. Nyiragongo in Goma, (eastern) DRC erupts as we speak. What a crazy volcano... pic.twitter.com/MYodnf98WU

​The Nyiragongo volcano is located 20 kilometers (12 miles) off the shore of Kivu Lake and is one of eight active volcanoes in the area.

The last time Nyiragongo erupted was in 2002, and lava flows killed 250 people and displaced some 120,000 in Goma. The lava speed, referred to by vulcanologists as a 'pyroclastic flow', reached 60 kilometers per hour, destroying everything in its path.