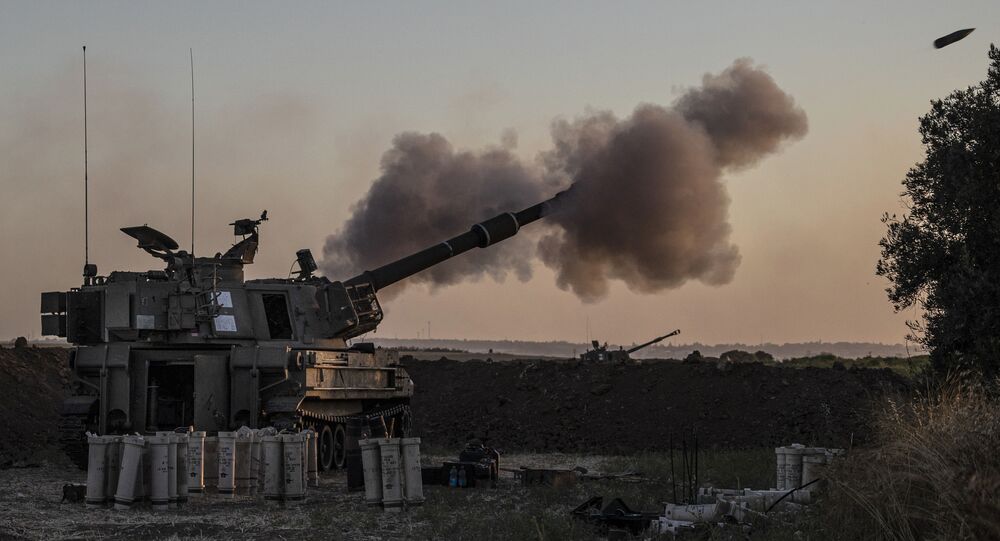 'US Influence Was Important' in Averting Israeli Ground Invasion of Gaza, Report Says

Last week, Israel Defence Forces (IDF) spokesperson Jonathan Conricus stated that the Israeli military did not cross into the Gaza Strip on 13 May, noting that the armed forces had launched an attack on multiple targets inside the enclave instead.

The Biden administration believes its "mostly behind-the-scenes intervention" helped prevent a ground invasion of the Gaza Strip by the Israeli military, Politico has quoted unnamed sources as saying.

The sources claimed that US officials had privately called on Israeli Prime Minister Benjamin Netanyahu and his aides "to wind down" the Jewish state's current airstrikes on Hamas targets in the Palestinian enclave.

According to the insiders, "Israel appeared on the verge of pushing forth with a ground invasion [of Gaza]" and "US influence was important in preventing a ground operation".

They added that Washington is allegedly seeking to avoid a repeat of the 2014 Hamas-Israel hostilities, in which more than 2,000 Palestinians and 70 Israelis were killed.

The remarks followed developments last Thursday, when the Israel Defence Forces (IDF) said their air and ground units were attacking the Gaza Strip, after several days of intensive rocket fire from the Palestinian enclave.

Shortly thereafter, IDF spokesman Jonathan Conricus pointed out that Israeli forces had not entered Gaza but had staged an attack on a spate of Hamas targets inside the area. He added that a total of 1,800 rockets had been launched at Israel from the Gaza Strip, noting that some 430 had fallen inside the enclave.

© AFP 2021 / ANAS BABA
Rockets are launched from Gaza city, controlled by the Palestinian Hamas movement, in response to an Israeli air strike on a 12-storey building in the city, towards the coastal city of Tel Aviv, on May 11, 2021

When asked about Israel's intention to enter Gaza, the spokesman said the IDF was ordered to be prepared, and that there were no IDF units inside Gaza at the moment.

Conricus stressed that information about the beginning of a ground operation reflected an internal misunderstanding, saying that he took personal responsibility for it.

© AFP 2021 / ANAS BABA
White House Reportedly Approves $735 Mln Arms Sale to Israel Amid Escalating Tensions With Hamas
Meanwhile, the largest Israeli-Palestinian confrontation in recent years, shows no signs of abating. On Wednesday, the IDF tweeted that "Israelis are being woken up again by the warning of incoming rocket fire [from Hamas]", who had conducted attacks on the southern areas of the Jewish state.

The escalation followed unrest in East Jerusalem over an Israeli court's decision earlier this month to evict several Palestinian families from the area, as well as a ban on Palestinians visiting certain holy sites during Ramadan.