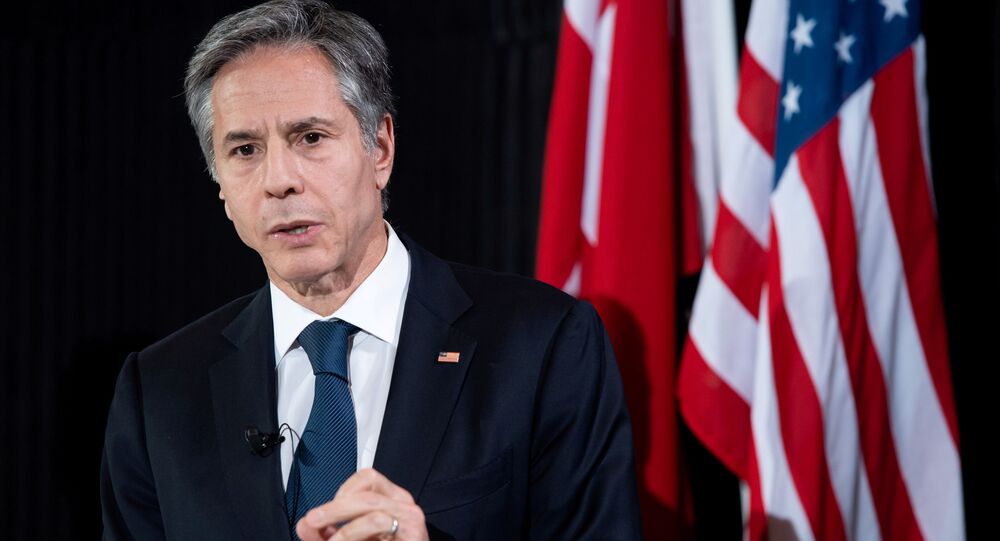 A new spate of violence erupted last week between Tel Aviv and militant groups based in the Gaza Strip over policies enacted by the Israeli government pertaining to Palestinians. Over the week, Hamas and Islamic Jihad have fired over 3,000 rockets towards Israel, with the IDF hitting numerous Hamas facilities and killing some of its top commanders.

US Secretary of State Antony Blinken has stated that Washington's goal remains to stop the ongoing violence between Israelis and Palestinians as quickly as possible. The top American diplomat added that he stressed the necessity of ending the violence in talks with his partners from Israel, the UAE, Jordan, Tunisia, Morocco, Bahrain, and the EU.

Blinken earlier stated that the US was working "behind the scenes" in order to end the violence that erupted between the two sides on 10 May, when Hamas fired hundreds of rockets at southern Israeli cities and Tel Aviv.

The secretary of state commented on Washington's repeated blocking of recent UN Security Council resolutions on the Israeli-Palestinian violence, claiming the US has never obstructed diplomacy, but on the contrary – is actively working in this field.

The last resolution that the US blocked on 17 May, condemned Israel's military response to attacks by militant groups in Gaza and called for a ceasefire.

The top diplomat also revealed the US had received new information about an attack by the IDF on a multi-storey building in Gaza hosting the offices of several media outlets, including such international networks as the Associated Press and Al Jazeera.

"It's my understanding that we've received some further information through intelligence channels, and it's not something I can comment on", Blinken said.

The IDF claimed that "Hamas military intelligence assets" have been hiding in the building using the media outlets as a "human shield". Israel says it warned the inhabitants of the building in advance about the imminent airstrike. No journalists were killed as a result, but AP said it was a close call and media outlets and journalists' associations have strongly condemned Israel's actions.

The Israeli attack was part of Tel Aviv's retaliatory strikes, which have so far left 212 Palestinians dead, including 61 minors. Israel, in turn, reported 10 people dead and 50 more injured by the rockets that managed to penetrate the country's Iron Dome defences.

New Spate of Violence Erupts Between Palestinians and Israelis

Rocket and missile exchanges between the IDF and Gaza-based groups started on 10 May, with Hamas firing hundreds of rockets towards Israel in response to Tel Aviv's allegedly discriminatory policies towards Palestinians in Jerusalem.

Prior to the escalation of violence, Palestinians had been protesting for weeks in response to Jerusalem's authorities limiting entrance to two prominent religious sites during the month of Ramadan - the Damascus Gate Plaza and Al-Aqsa Mosque.

© REUTERS / Ammar Awad
Palestinians gather after performing the last Friday of Ramadan to protest over the possible eviction of several Palestinian families from homes on land claimed by Jewish settlers in the Sheikh Jarrah neighbourhood, in Jerusalem's Old City, May 7, 2021

An ongoing legal battle by several Palestinian families facing eviction from their long-time homes in the East Jerusalem neighbourhood of Sheikh Jarrah only served to fan the flames of violence. The families have been living in this neighbourhood for several decades after losing their homes in the process of Israel's establishment in 1948.

However, now they are facing eviction due to a lawsuit filed by Israeli settlers, who seek to claim the land. After losing the case in a court, the affected Palestinian families filed an appeal with Israel's Supreme Court. The ruling was due to be issued on 9 May, but had been delayed by order of Israel's attorney general for 30 days due to widespread protests.