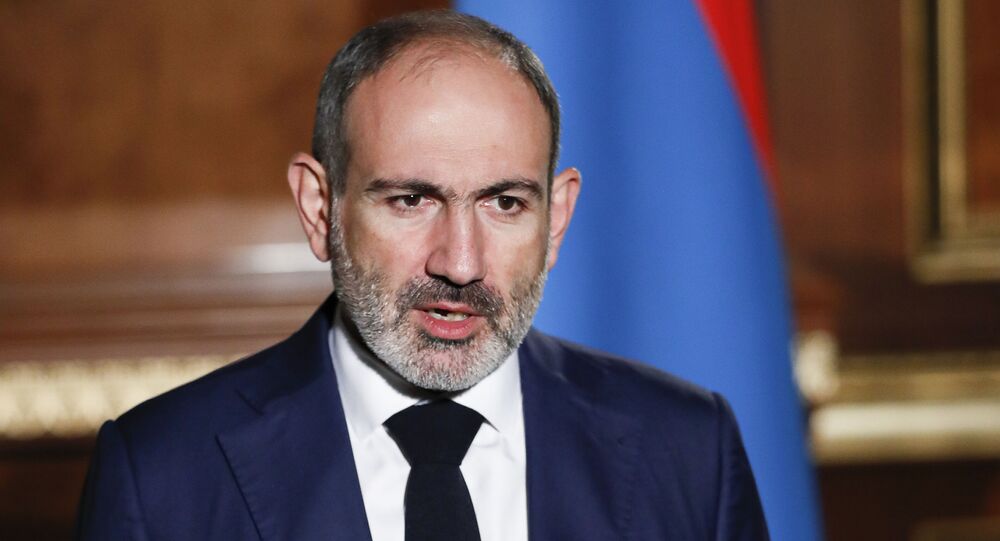 "Pashinyan said that he had given an order to officially request the CSTO to start consultations in line with Article 2 of the Collective Security Treaty," the Armenian cabinet said in a statement.

According to the Treaty, the member states maintain their security on a collective basis.

“In the event of a threat to the security, territorial integrity, or sovereignty of one or several Member States or a threat to international peace and security, the Member States will immediately put into action the mechanism of joint-consultations with the aim of coordinating their positions and taking measures to eliminate the threat that has emerged,” Article 2 of the Treaty reads.

Earlier in the day, Pashinyan and Putin held a phone conversation to discuss the situation on the Azerbaijani-Armenian border.

© Sputnik / Alexei Nikolsky
Kremlin: Putin 'Spent Many Days With Phone in Hand' to End Bloodshed in Karabakh
According to the Kremlin, the Russian President reaffirmed his commitment to continue active mediation between Yerevan and Baku, and to maintain close contacts with both the sides for the sake of regional stability.

The phone call was held after Pashinyan accused Azerbaijani troops of crossing into Armenia's southern Syunik province and trying to stake a claim to the territory. Syunik province separates Azerbaijan from its exclave Nakhchivan and is home to over 140 thousand people, according to 2011 census data.

Pashinyan chaired an emergency meeting of the Security Council on Thursday, saying that over 200 Azerbaijani soldiers were trying to “lay siege” to Lake Sev Lich in Syunik.

"...Azerbaijan’s armed forces crossed the state border of the Republic of Armenia and advanced as far as 3.5 kilometres in that section. In fact, they are trying to surround and siege the Lake. Of course, this is unacceptable to the Armenian side, because it represents an encroachment on the sovereign territory of the Republic of Armenia. It still remains to be seen why such an action was possible, but it should be noted that this is an act of subversive infiltration. It should also be stated that our armed forces responded early this morning with appropriate tactical manoeuvres and other necessary measures," Pashinyan told the meeting.

On Thursday, Armenia's Defence Ministry said they had stopped Azerbaijani troops from advancing and forced them to return to their positions.

Meanwhile, Baku has rejected the accusations, claiming that Azerbaijan was enforcing its own border and was committed to defusing tensions in the region.

On the same day, the CSTO said in a statement that it was closely following the developments in Armenia’s Syunik province, adding that "if necessary, actions will be taken under the provisions of the Collective Security Treaty and the CSTO Charter".

In September 2020, the decades-long tensions between Armenia and Azerbaijan escalated into a 44-day war in the unrecognised Nagorno-Karabakh Republic, an Armenian-majority enclave, where tensions have been high since 1988, finally leading to the region declaring independence amid the disintegration of the Soviet Union.

The autumn war led to massive military and civilian casualties on both sides. The hostilities ended after the sides agreed to a Russian-brokered ceasefire on 9 November.

Пресс-служба президента Азербайджана
Azerbaijan’s Aliyev Threatens Armenia With ‘Iron Fist’ Over Officials’ Visits to Karabakh
The deal resulted in the loss of most territories controlled by the self-proclaimed Nagorno-Karabakh Republic and the deployment of Russian peacekeepers to the region. The peacekeepers escort military convoys, ensure the safe return of refugees to Nagorno-Karabakh, monitor the ceasefire, and provide humanitarian assistance.

The confrontation in Nagorno-Karabakh originally began in February 1988, when the Armenian-dominated region declared its secession from the Azerbaijan Soviet Socialist Republic. The latter lost control of the self-proclaimed republic and its adjacent areas in the 1992-1994 armed clashes. Since 1992, negotiations on peaceful resolution of the conflict were ongoing with the mediation of the Minsk Group, co-chaired by Russia, France, and the United States.