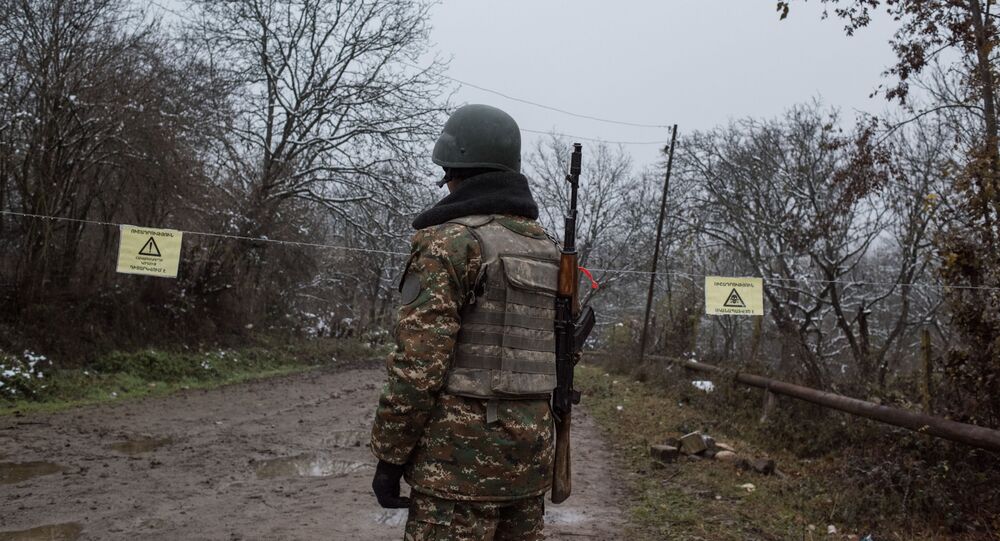 YEREVAN (Sputnik) - The Azerbaijani military on Thursday made an attempt to move their posts deeper inside the Armenian territory near the cities of Syunik and Vardenis, the Armenian Defense Ministry said, adding that Yerevan demanded Azerbaijani troops to move back to their previous placed of deployment.

"On May 13, the Azerbaijani armed forces, again under the pretext of ‘clarifying the borders,’ undertook another provocation against the sovereign territory of Armenia, trying to advance their posts in the areas of the cities of Vardenis and Sisian [Syunik province]," the ministry said in a statement.

The ministry added that the Armenian side has halted both attempts and called on the Azerbaijani side to leave Armenian territory.

© REUTERS / HAYK BAGHDASARYAN/PHOTOLURE
Russian Peacekeepers Cleared 25 Acres in Nagorno-Karabakh of Mines, Defence Ministry Says
At the end of September 2020, hostilities resumed in Nagorno-Karabakh - a continuation of a long-term conflict - which led to casualties among civilians. The sides signed a truce on 10 November 2020.

With Moscow mediating, Azerbaijan and Armenia agreed to cease hostilities completely and exchange prisoners and bodies of the dead. Yerevan also handed the Kalbajar, Lachin and Agdam districts to Baku, and Russian peacekeepers were stationed in the region.