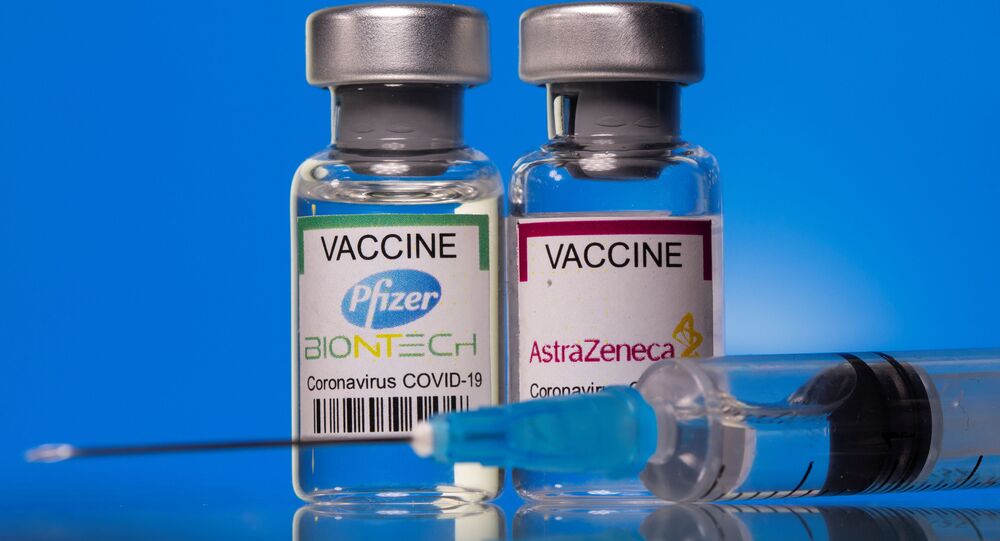 Earlier this month, the European Medicines Agency launched an inquiry into cases of a rare autoimmune disorder from AstraZeneca's COVID-19 vaccine. In March, numerous countries suspended the use of this inoculation over serious side effects, including blood clotting.

Mixing doses of the Oxford-AstraZeneca and Pfizer-BioNTech coronavirus vaccines results in mild to moderate side effects for adults, a UK study has indicated.

Preliminary data from the University of Oxford-led Com-Cov study were published in a research letter in the medical journal The Lancet earlier this week. The first full results are expected to be released in June.

The study, launched in February, aims to explore whether a different jab for the second dose may give a person lasting immunity, better protection from new variants of the coronavirus, or allow clinics to exchange vaccines if supplies are interrupted.

© AP Photo / Bob Edme
A Red Cross volunteer, left, welcomes a man at a vaccination center where directions to follow to get the AstraZeneca or the Pfizer vaccine are shown in Saint-Jean-de-Luz, southwestern France, Tuesday, March 16, 2021

According to initial data, although chills, headaches, and muscle pain were reported more frequently when the AstraZeneca and Pfizer vaccine doses were combined, any adverse reactions were short lived, with no other safety concerns from mixing the vaccines.

"These are the type of reactions we do expect with vaccines […] and they are more or less the same types of reactions that you're seeing with the standard schedules. It's just that they're occurring more frequently", Matthew Snape, the trial's chief investigator and associate professor in paediatrics and vaccinology at the University of Oxford, pointed out.

He added that the preliminary information from the study "suggests that mixed dose schedules could result in an increase in work absences the day after immunisation, and this is important to consider when planning immunisation of healthcare workers".

Snape also said "it's a really intriguing finding and not something we were necessarily expecting".

The comment followed the Canadian provinces of Ontario and Quebec signalling plans to mix Oxford and Pfizer vaccines in the immediate future, amid concerns over rare blood clots that were ostensibly caused by the AstraZeneca jab.

© REUTERS / DADO RUVIC
UK Regulator Advises People Under 40 to Use Vaccines Other Than AstraZeneca
In March, the European Medicines Agency (EMA) said it was investigating incidents with patients who received shots from one batch of AstraZeneca vaccines in several EU countries and who later had thromboembolic complications.

A number of European countries, including Austria, Estonia, Lithuania, Latvia, Luxembourg, Denmark, Bulgaria, Norway, Iceland, Slovenia, Cyprus, Italy, France, Germany, and Spain have suspended the use of the AstraZeneca vaccine. The EMA later made a recommendation to continue using the medicine, after which a number of countries resumed vaccinations using the product.