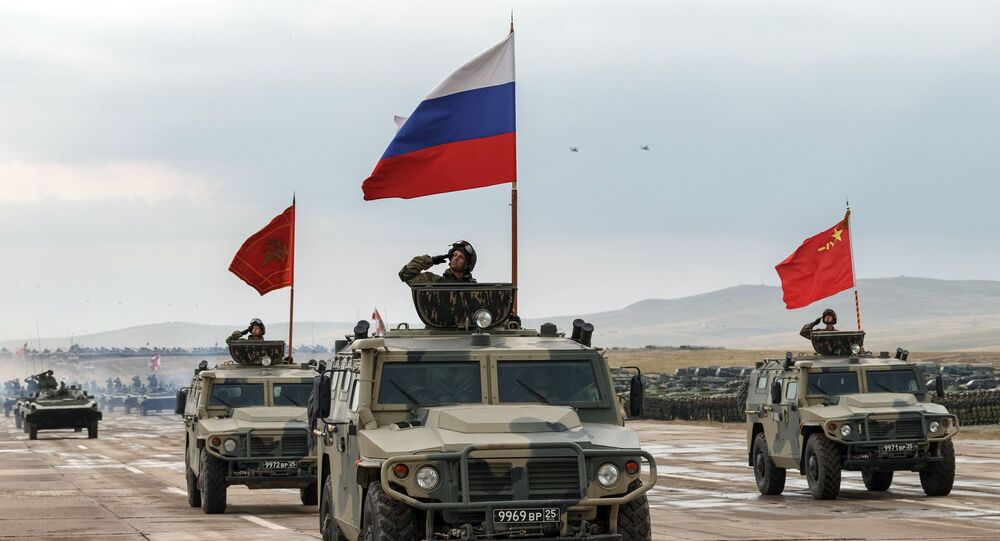 Chinese Media Warns US Would Face ‘Absolute Nightmare’ in Conflict With China, Russia

Russian Foreign Minister Sergei Lavrov recently characterized Moscow’s relations with Beijing as “the best in their entire history,” with the Chinese Foreign Ministry announcing last month that the two countries enjoy a “comprehensive partnership” and would “support each other in matters of protecting state sovereignty.”

China’s ruling Communist Party-aligned Global Times newspaper has published a pair of editorials warning the US and its allies not to provoke aggression against Moscow and Beijing, and suggesting that the two nations are now significantly stronger than the old Eastern Bloc.

“The combined power of China and Russia is far greater than that of the former Soviet Union-Eastern Europe bloc. The economic, scientific and military strength of China and Russia is not only huge in scale, but also has wider implications for the whole world. If anyone tries to ride roughshod over this fact and pushes China and Russia to join forces in a desperate fight, that must be its nightmare,” the first of the editorials, published 5 May, reads.

Warning Washington that its “strategic game with fire” would fail, the newspaper stressed that Moscow and China carry themselves in a “strategically restrained” manner and “are committed to upholding” the United Nations Charter and an “international order based on international law.”

The article goes on to suggest that the reason US elites have sought to isolate China and Russia and exclude them from a new Western-dominated international system is because they “have either recognized or anticipated the aging and declining competitiveness of the American and Western way of governance,” and seek to simply jettison potential competitors.

© REUTERS / POOL
President Joe Biden addresses a joint session of Congress, with Vice President Kamala Harris and House Speaker Nancy Pelosi (D-Calif.) on the dais behind him, in Washington, U.S., April 28, 2021.
© Sputnik / Alexey Nikosky
Beijing Downplays Possibility of Formal Alliance With Moscow, Highlights ‘Non-Alignment’ Principles
The newspaper emphasized that while Russia and China have resisted the creation of a formal military alliance, “the more the Western countries strengthen their antagonistic alliance” against them, the more they “will be inclined to jointly deal with it. This is the basic rule of politics.”

The second editorial, published 6 May, focused on the communique issued by the G7’s foreign ministers after their London meeting, suggesting that “among various topics of no substance, China and Russia were the real focus” of the talks.

Admitting that the United States continues to be the world’s single most powerful country “in terms of comprehensive strength” and ability to force countries to bend to its will, Global Times argues that Washington’s “problem” is that it is “too greedy,” with its desire for total hegemony outstripping its actual capabilities and causing an “unprecedented sense of crisis and confusion.”

© Sputnik / Виталий Аньков
China's Foreign Minister Hails Prospects of Strategic Cooperation With Russia as Limitless
The editorial suggests that Washington’s attempts to rally allies to confront both Russia and China simultaneously fail because “doing that is almost equivalent to strategic suicide,” and that unlike the attempt at greater Western unity, comparable to “the last few drops of water in a sponge,” Russian-Chinese cooperation is a “sponge” that “has just been fully soaked with water.”

“China and Russia could make more diplomatic coordination in opposing hegemony and take counteractions against US attempts to strengthen alliances. The two can also tap the huge potential for economic complementarity. In addition, the two countries have just begun in moving closer to each other militarily, if necessary, there could be a lot of cooperation that can cause shocks,” the editorial stresses.

Offering advice to leaders in Moscow and Beijing, the newspaper argues that “as long as China and Russia don’t make mistakes, do their own things well, reinforce comprehensive strategic coordination with each other and continuously deepen integration with the world,” the US will be unable to realize its ambition of “replicating” its victory in the Cold War.

The pair of editorials comes amid the continued cementing of Russia-China ties, demonstrated last month as Beijing expressed a commitment to further boost cooperation with their Russian counterparts as Washington and its allies ramped up its sanctions war against them. Washington slapped major new restrictions on Russia last month amid fresh unsubstantiated claims of election meddling and hacking, and the US and its allies hit China with sanctions earlier this year over the alleged “genocide” in Xinjiang. Beijing denounced the “genocide” claims and pointed to the unsavory moments in many Western nations’ own history against aboriginals, African slaves, and others.

Former President Donald Trump, who promised during the 2016 campaign to try to improve relations with Moscow but got bogged down in Russiagate claims for almost the entirety of his presidency, recently attacked the Biden administration for pushing Russia and China into one another’s arms by continually antagonizing both countries, suggesting that “the worst thing you could do is put China and Russia together, and they are together.”

Trump added that he suspected that Washington may be deliberately exacerbating the conflicts in Ukraine and Taiwan, saying neither issue was ever a big problem when he was president.

In March, US Secretary of State Antony Blinken announced that the US would need to be able to act against China “from a position of strength,” and urged US allies to close ranks to deal with the “challenges” posed by both China and Russia.

China, Russia to Support Each Other as West Ramps Up Sanctions Regime, Beijing Says