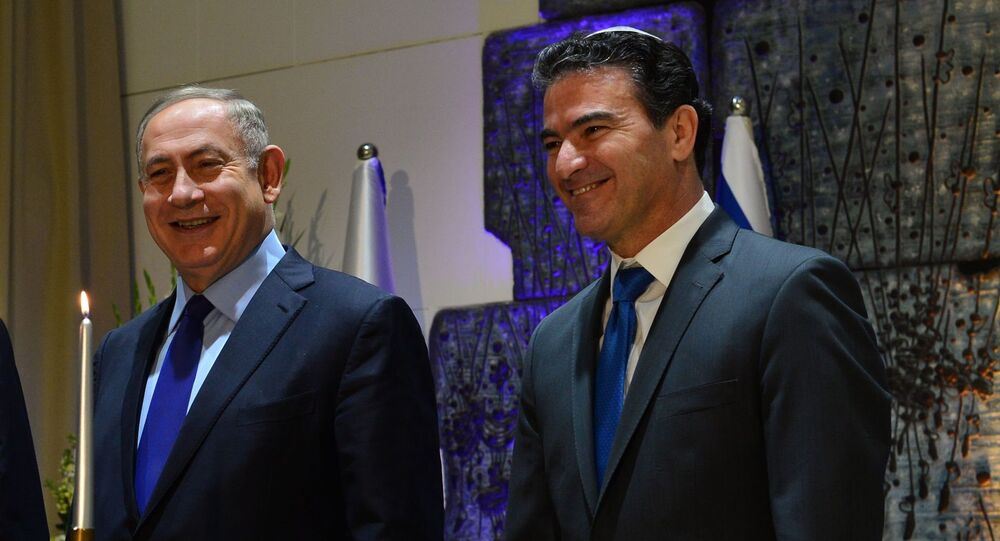 Australian casino mogul James Packer, 53, who has admitted to suffering from bipolar disorder, had developed such a close relationship with Israel’s elite that at a certain point he was labelled a “national risk”, according to a Haaretz newspaper report.

Packer’s years-long relationship with the country’s ruling class, including Prime Minister Benjamin Netanyahu and Yossi Cohen, who headed the national security council at the time, has surfaced amid the lengthy corruption trial against Netanyahu.

Police launched a corruption probe into the Netanyahus in late 2016 on the basis of the testimony of a personal assistant to Packer and Israeli billionaire Hollywood producer and arms dealer Arnon Milchan.

© AP Photo / Matt Sayles
Producer Arnon Milchan accepts the Legacy of Citizens Lifetime Achievement award at the 'From Vision to Reality' event celebrating the 60th Anniversary of the state of Israel in Los Angeles. (File)

Since then, details of testimonies by witnesses have regularly been leaked in the Israeli press. Milchan, an Israeli intelligence operative from the mid-1960s to the mid-1980, had allegedly introduced Packer, who is not a suspect in the corruption case, to Netanyahu in 2013.

The Australian ostensibly became enamoured with Netanyahu, claiming the country’s longest-serving leader was “the most impressive person I’ve met in my life”.

Milchan, as revealed in his testimony cited by the outlet, pushed Packer to lavish gifts on the prime minister’s family to further business.

According to case 1,000, now dubbed the “gifts affair”, the offerings included expensive cigars, cases of pink champagne, jewellery for Netanyahu’s wife Sara, and free holidays for his son, Yair.

In 2015, Packer was in attendance as Prime Minister Netanyahu addressed the US Congress in Washington DC, and hen Netanyahu spoke at the United Nations.

However, Packer’s personal life hit a low, according to Damon Kitney, the author of The Price of Fortune, based on interviews with the Australian. The tumultuous period was marked by an ugly split with his fiancee Mariah Carey, against the backdrop of a public battle with his mental health.

The Australian billionaire was reportedly drinking a bottle of vodka “and more” a day at the time, while using “powerful psychiatric drugs”.

Packer’s close relationship with the prime minister and Cohen, who was by then the Mossad head, warranted a check on his “mental and medical condition” stated Milchan in his testimony, according to Haaretz.

“I would check because of two concerns: as a friend and as a national risk,” the Israeli billionaire businessman was quoted as saying.

According to the outlet, Benjamin Netanyahu shared the concerns regarding Packer’s state, and got in touch with a psychiatrist. This fact has not been confirmed by the Israeli PM.

According to Israeli politician Yair Lapid, whom Milchan had also introduced to Packer, concerns about the Australian billionaire’s state were echoed when they met, saying he “looked drugged”.

Amid the testimonies dating to those events, the Netanyahus allegedly overlooked all these issues tormenting Packer, and ostensibly even sought to use them to their advantage.

Ari Harow, a former Netanyahu chief of staff who resigned in 2015 and turned state’s witness in a plea bargain amid the corruption probe, said in testimony that “it was clear that the was cited as saying that the relationship from [Netanyahu’s] point of view was in order to benefit from this friendship".

There has not been any official comment on the report from a spokesperson for Packer.