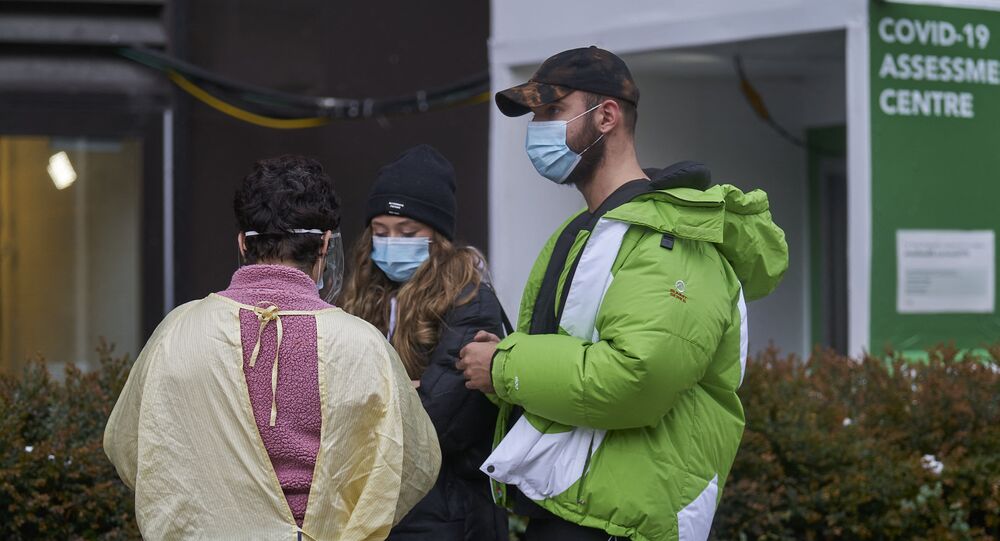 As Canada’s second-most populated province is entering the second month of its third lockdown, some locals are growing worried about its long-term consequences.

According to political commentator Hazar Alsabagh, the provincial government should learn how to balance between science and the economy when it comes to imposing coronavirus restrictions.

Sputnik: On April 1st Ontario's provincial authorities announced yet another COVID “shutdown” right after they'd eased the previous set of coronavirus restrictions. This time they closed down hundreds of businesses-primarily retail outlets and started enforcing stay-at-home orders. What is the mood like in Toronto and other cities in the province today? What do people say about these restrictions?

Hazar Alsabagh: You know, the mood is quite mixed, actually, still.  But mostly Ontarians are beginning to get frustrated, and I think it's not that the majority of Ontarians don't want to comply, but more so they are frustrated with their government's teeter-tottering in deciding how to move forward and how to control and manage COVID and this pandemic.

Sputnik: In a recent article that you wrote for Sunday Preach in collaboration with Diverge Media, you argue that “Ontario is closed for business for good”. Are things really that dramatic in your province?

Hazar Alsabagh: I was being a little inflammatory, that's to say the least -that's for sure. However, right now it feels like it's this dramatic because our government is arbitrarily closing businesses and retail outlets that they've determined were nonessential. And we all know that the idea of a business being non-essential is very subjective. And then the point of view of the government - they cannot possibly emphasise with all our business owners - small or otherwise, in Ontario, and decide that these businesses are not essential. From the perspective of the business owner, however, and the employees that they staff - for them this is essential. This is their livelihood. And to be dependent on a basic income or government income or a stimulus check - it's not sustainable.

​It isn't sustainable for the government to continue to pay people to stay home, however little that is. And it's not sustainable for workers - Ontarians who work and who need to make a living. They need to support their families. And so we're bound to implode. And I can see this. And this is why I was being dramatic because sometimes you have to be dramatic to draw attention to a problem, a much bigger problem that is going to implode in the future.

Sputnik: Last year we saw some small business owners – Adam Skelly of Adamson’s BBQ for instance, rising up against the lockdown, which led to the deployment of police and even arrests being made. Is there room for such a “restaurant rebellion” at the moment, or do businesses just blindly follow the orders, even if it means heavy losses or closures?

Hazar Alsabagh: I think that there is going to be more tension. I think that it'll get worse if Doug Ford - our premier Doug Ford, doesn't do what's right and start to think about not only the science, as he says, as he puts it - he believes he's following the science, but at the same time, he should learn to balance. He should get his cabinet together. He should learn to collaborate with the opposition, get his cabinet together and start taking proactive measures at balancing not only the health and physical aspects but the economic health of our province because he's clearly neglected the economic health of our province.

It seems like there is a growing pressure on churches in Canada amid COVID restrictions. GraceLife church remains fenced off despite anger from Alberta worshippers.https://t.co/nP8gApz1nr

​Sputnik: We see that despite the fact that the government has backed down on some of the measures that they introduced – on roadside police checks, for instance, there is still an increasing pressure from law enforcement all over Canada on those who attend church services or even on those who decide to spend their free time in the park. For instance, police blocked off or invaded churches in Alberta. It happened in Ontario as well. Law enforcement agents also cordoned off cherry blossoms in a Toronto park. Do you think we'll see more of these surreal scenes in the future or will there be an end to it soon?

Hazar Alsabagh: Like I said in my previous response, if things don't change and if Doug Ford still continues to teeter-totter between lockdowns and freedom and lockdowns and freedom -  this will likely continue on. I think that he feels optimistic that delivering the vaccine to a point where we reach herd immunity will make him ease the restrictions. However, this vaccine is a whole other can of worms where they haven't done a very good job at managing the delivery and the execution of that programme. So I would not be surprised if law enforcement continues in this route because they're just as confused as we are. Seeing police officers and law enforcement agencies - their job is to enforce the law. So they get their information from the government, but the information they're receiving from the government is so confusing.

A #Toronto Police Officer asks Volleyball Canada national team member @bukovec_sophie to stop training on the beach while Lakeshore Blvd 50 meters away is open for #ActiveTO . Facilities for high performance athletes are closed by the @fordnation #stayathomeorder for #COVID19 pic.twitter.com/0nDhzTpjna

​Again, with the teeter-tottering, one minute they're asked to enforce these lockdown measures and distribute fines and are not given clear direction as to how they should do it, whether or not this is a regulation or a law, are they're supposed to arrest or just fine people. They have no idea what they're doing either. And it's frustrating for them as well, which is why even the last couple of weeks ago, they stood their ground and said no to these additional measures Doug Ford tried to add, where the police agencies would be empowered - they stood their ground and said no. And that is a huge statement that is almost as - I'm going to be dramatic again: that's like mutiny right there. A huge statement when police agencies around the province say “no, you have crossed the line” to their premier, to their leader, essentially.

And so with that in mind, the premier has now lost the respect of the police agency. They have no idea how they're supposed to implement these measures, these measures they're trying to implement. And so it's likely that we're going to see more of these “raids” for a lack of a better term.