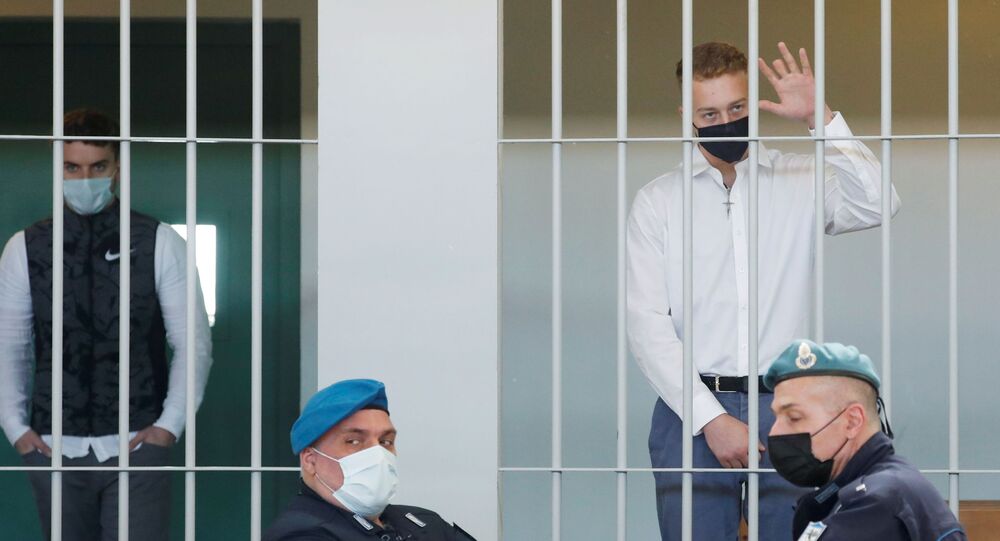 Americans Finnegan Lee Elder and Gabriel Natale-Hjorth made headline news in the summer of 2019 after the pair were charged with the killing of Mario Cerciello Rega, an officer with Italy's Carabinieri paramilitary force, following a botched drug deal.

An Italian jury convicted two Americans in the 2019 slaying of an Italian police officer on Wednesday, sentencing the duo to life behind bars.

After more than 12 hours' worth of deliberations, the jury bestowed Elder and Natale-Hjorth with the harshest possible sentence under Italian law. They were immediately taken out of the courtroom following the announcement.

Elder and Natale-Hjorth were both found guilty of homicide, assault, resisting a public official and extortion for stealing a backpack from a drug dealer. Elder was separately charged with carrying an attack-style knife that is prohibited in Italy.

© REUTERS / Remo Casilli
U.S. citizens Finnegan Lee Elder and Gabriel Natale-Hjorth, who are being tried on murder charges after Italian Carabinieri paramilitary police officer Mario Cerciello Rega was killed in July 2019, wait for the start of a hearing where closing arguments will be made, in Rome, Italy, April 26, 2021.

Prosecutors argued during the trial proceedings that Elder had stabbed Rega approximately 11 times with a knife he obtained in California, and that Natale-Hjorth had helped Elder hide the murder weapon in their hotel room after the July 2019 killing.

Renato Borzone, one of Elder's defense lawyers, remarked during the 14-month-long trial that Elder had been diagnosed with mental health issues that caused him to undergo extreme paranoia. As such, Borzone argued that Elder had "short-circuited" when he was confronted by Rega.

At the time, Elder and Natale-Hjorth had met up in Rome's Trastevere nightlife district, with Natale-Hjorth later reaching out to a contact who they bought roughly $100 worth of cocaine. However, as it later turned out to be crushed aspirin, the pair stole the dealer's backpack in frustration.

As the night went on, the pair agreed to return the backpack in exchange for either the return of their money or illicit substances. Later, rather than meeting with Elder and Natale-Hjorth, the dealer called the police. Responding to the call, Rega and his partner Andrea Varriale, who were not in uniform, met with the two Americans.

It's unclear why the two plainclothes officers did not arrest the duo on the spot. Elder and Natale-Hjorth both told the courtroom that they had believed the officers were simply thugs as they had not identified themselves as officers. Both Americans argued they acted in self-defense after the officers reportedly attacked them first.

Varriale, who suffered injuries to his back during the 2019 altercation, noted during proceedings that he and Rega identified themselves as law enforcement in Italian.

Following the fatal incident, Varriale was placed on probation after it was determined that he lied about having his service weapon and for not having relayed to dispatch their location or called for backup.

Moscow: Expulsion of Russian Diplomats From Italy Doesn't Meet the Level of Our Bilateral Relations