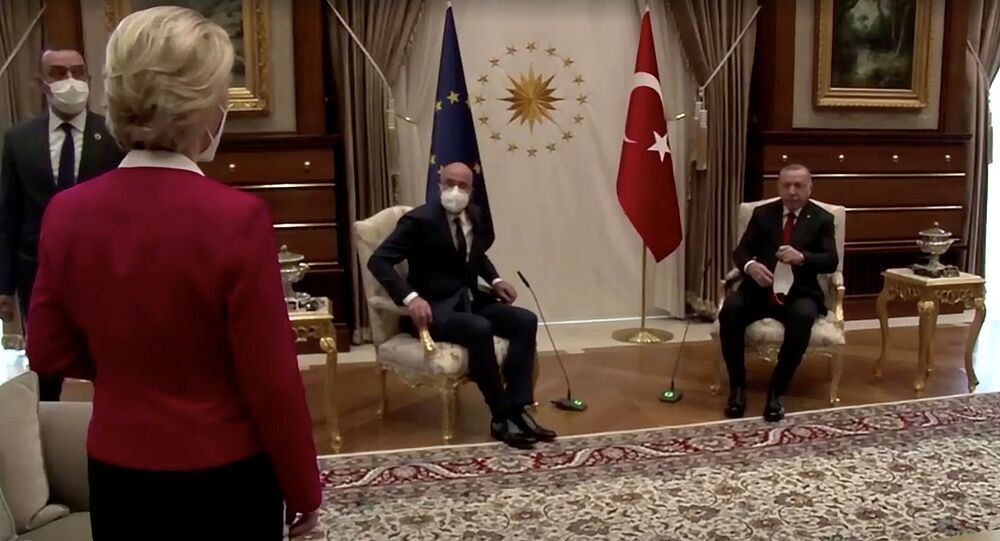 MOSCOW (Sputnik) - The seating arrangement controversy during European Commission President Ursula von der Leyen's visit to Turkey earlier this month has nothing to do with women's rights or her being European, Turkish Foreign Ministry spokesperson Tanju Bilgic said on Wednesday.

Von der Leyen was left without a chair at a meeting with Turkish President Recep Tayyip Erdogan and Foreign Minister Mevlut Cavusoglu in early April, claiming the incident was an overt case of sexism that deliberately took place "because she is a woman."

On Monday, the European Commission president commented on the controversy, which has become known as "Sofagate," by saying that she "felt hurt and left alone: as a woman and as a European" because the incident made her realize "how far we still have to go before women are treated as equals."

Because her colleague, European Council President Charles Michel, and Erdogan were prompt to occupy the only two chairs arranged in the meeting hall, von der Leyen had to retreat to a sofa facing Cavusoglu, whom she outranks under diplomatic protocol.

"I am the first woman to be president of the European Commission. I am the president of the European Commission, and this is how I expected to be treated when visiting Turkey two weeks ago, like a commission president. But I was not. I cannot find any justification for how I was treated in the meeting, so I have to conclude that it happened because I am a woman," von der Leyen told the European Parliament, adding that "I felt hurt and I felt alone, as a woman and as a European," von der Leyen stated.

My visit to Turkey showed how far we still have to go before women are treated as equals. Always. Everywhere.

My story made headlines. But there are so many stories of women, most of them far more serious, that go unobserved.

We have to make sure these stories are also told!

​The senior EU official stressed that the issue was not about seating arrangements or protocol, but about the values that Europe stood for.

While a lot of women politicians and activists took to social media to express support for von der Leyen, insisting it was a case of sexism, others were unmoved, saying the incident was a breach of diplomatic protocol or even just an arrangement mistake, unrelated to gender issues.

Others noted that von der Leyen ought to blame her European colleague Charles Michel for the seating controversy.

It is appalling that EU Commission President Ursula von der Leyen still pretends that Ankara didn’t give her equal seating in meeting with Erdogan because she was a woman.