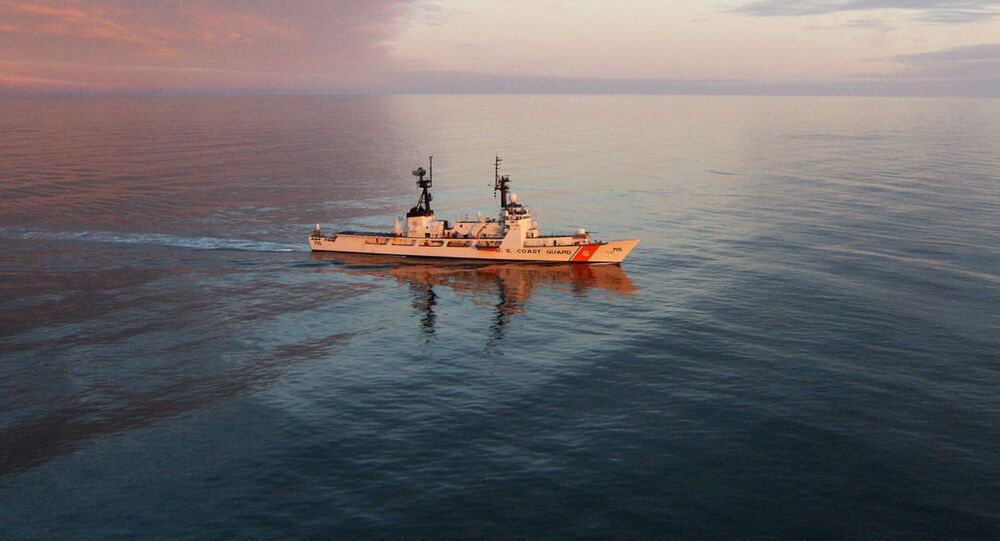 Up to Old Tricks Again? US Patrol Cutter Kicks Off 'Transit Into Black Sea'

In mid-April, the US cancelled plans to send the missile destroyers USS Roosevelt and USS Donald Cook to the Black Sea reportedly due to concerns that the deployment might "provoke" Moscow.

The American coastal patrol cutter Hamilton has begun its transit into the Black Sea to work with "NATO allies and partners in the region", the US Sixth Fleet tweeted on Tuesday.

The announcement comes after Russian Foreign Ministry spokeswoman Maria Zakharova told reporters last week "the US and other NATO member states that seek to increase their presence on Russia's borders, continue provocative activities in the east and in the Black Sea waters".

BREAKING: 🇺🇸@USCG Cutter Hamilton begins its north bound straits transit into the #BlackSea, after working with @USNavy #USSRoosevelt in #AegeanSea. Hamilton will be working with @NATO Allies & partners in the region. #Triservicemaritimestrategyhttps://t.co/mIExoN8qlD pic.twitter.com/VIPLsrMSyC

The statement was preceded by US strategic drone Global Hawk conducting a reconnaissance mission near the borders of Crimea ahead of Russian military drills on the peninsula.

US Drops Plans to Send Missile Destroyers to Black Sea

Earlier in April, the US suddenly cancelled the deployment of a pair of Tomahawk-armed Arleigh Burke-class missiles destroyers, the USS Roosevelt and USS Donald Cook, to the Black Sea, several days after announcing plans to sail them into the area.

The deployment was halted after Russia's Black Sea Fleet kicked off large-scale drills involving an array of advanced Kalibr cruise missile-armed warships. The US news outlet Politico, in turn, cited unnamed sources as saying that Washington scrapped the plans to send the missile destroyers to the Black Sea due to fears that the deployment might "provoke" Moscow.

© AFP 2021 / PETRUT CALINESCU
The USS Destroyer Donald Cook is seen at the Constanta shipyard in the Romanian Black Sea port of Constanta, on April 14, 2014

Over the past few years, the US has regularly sent its warships to the Black Sea in a show of force toward Russia and a "demonstration of support" for Washington's allies in Kiev, deployments that were closely monitored by the Russian Black Sea Fleet.

The incident involving the Roosevelt and Donald Cook came amid tensions between Russia on one side and Ukraine and its US supporters on the other. Earlier this year, authorities in the self-proclaimed Donetsk and Lugansk republics in eastern Ukraine's Donbass region accused Kiev of launching unprovoked artillery and sniper attacks along the line of contact, and of building up tanks and other units for a possible large-scale offensive.

Kiev and Washington blamed Russia for the provocations, and accused Moscow of building up forces on its western borders. Russia, in response, urged the West to stop turning Ukraine into a potential "powder keg" by supplying it with weapons, and asked Kiev to adhere to the Minsk ceasefire agreements. Russia has repeatedly rejected allegations of its meddling in Kiev's domestic affairs, stressing that it is not part of the Ukraine conflict.

Russia Restricts Access to Three Areas of the Black Sea

In a separate development in April, the Russian Defence Ministry's department of navigation and oceanography stated that three areas of the Black Sea would be closed to passage by foreign warships and other state's vessels between 24 April and 31 October.

© Sputnik / Evgeny Kotenko
Why Kiev's Preparation for War in Eastern Ukraine Cannot but Worry Russia
The department noted that the zones planned for closure will not prevent navigation through the Kerch Strait and are located within Russia's territorial waters.

While the US dubbed the move an attempt to undermine and destabilise Ukraine, Russian Secretary of the Security Council Nikolai Patrushev pointed to Moscow having registered "increased military activity by NATO, the United States in particular, in the immediate vicinity of Russia's borders in the Black Sea region".

"The question is, what does the US have to do with the Black Sea? What kind of national interests are they pursuing here, if many Americans have no idea where this sea is located?", he pointed out.

According to the security official, Russia has been "forced to take measures to ensure the security of its territory", but at the same time, remains interested in "holding talks on a political settlement".