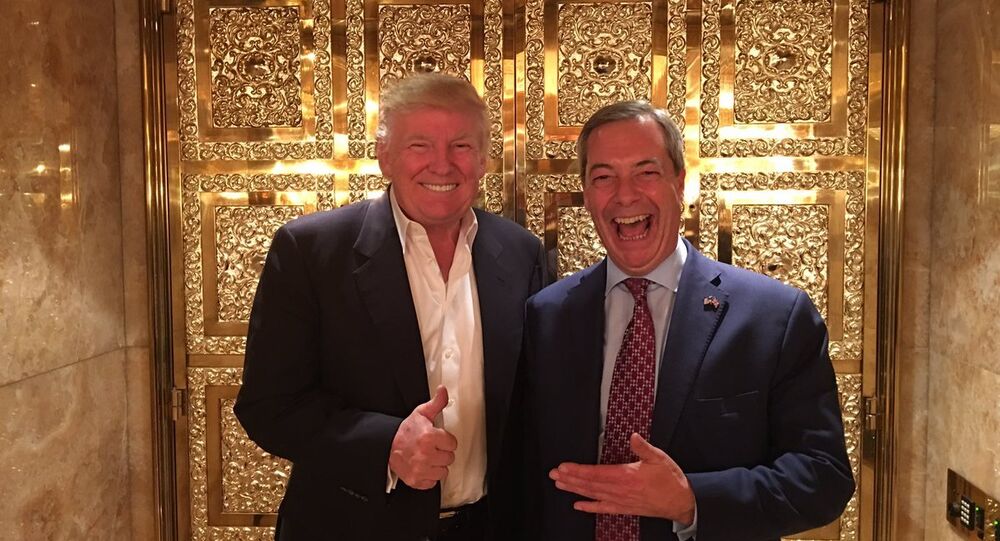 During a campaign rally in Arizona in October 2020, then-US President Donald Trump invited Brexit Party founder Nigel Farage on stage, introducing him as "one of the most powerful men in Europe". Farage responded by touting Trump as "the single most resilient and bravest person I have ever met in my life".

Brexit Party founder Nigel Farage has described his Monday half-an-hour sit-down with former US President Donald Trump at the latter's home in Mar-a-Lago as a "meeting of friends", focusing on topics related to the Queen and Prince Philip, Britain's vaccine rollout, and the 2024 US presidential election, among other things.

Will Trump Run for Presidency for Third Time?

In an exclusive interview with The Telegraph, Farage said the ex-POTUS is "thinking very, very hard" about running in the 2024 elections as he remains in "listening mode" at Mar-a-Lago.

He added that Trump "has got a massive decision to make" on his possible third run, describing the 45th president as "the only guy that can do it". According to the Brexit Party founder, "no one" has Trump's charisma.

When asked about the reaction, Farage said the former POTUS "listened" and that he was "in a listening frame of mind".

© AP Photo / Terry Renna
A moving truck is parked outside Mar-a-Lago in Palm Beach, Fla., on Monday, Jan. 18, 2021. President Donald Trump is expected to return to his residence on Wednesday, Jan. 20.

The UK politician also said that Trump voiced unhappiness "at the way the last [3 November 2020 US] election was conducted", adding that the ex-president currently believes the Democrats are "drifting to the left". Trump has repeatedly refused to concede defeat to Democrat Joe Biden, heaping scorn on what he described as "the most corrupt elections" in US history.

Postal Voting and Attitude to Biden

Asked whether Trump made any comments on the Biden administration, Farage said he doesn't think the 74-year-old is "bothered about Mr Biden at all".

"He doesn't really think he's in the lead and he thinks the Democrats are drifting in a leftwards direction", Farage noted.

According to Farage, the two also touched upon the issue of mail-in voting, with the Brexit Party founder insisting that "America has to take France's lead and stop this from happening", an apparent nod there being no mail-in voting in France. Trump, ahead of the 2020 US election, said that mail-in voting "is going to be catastrophic" and may make the US "a laughing stock all over the world".

Separately, Farage told The Telegraph that Trump has lost weight and is looking "really very happy". According to the 57-year-old, the ex-POTUS "is playing lots of golf and loving it".

During the Mar-a-Lago sit-down, Trump also expressed his concern for Queen Elizabeth II who is "going through a really tough time", following the death of her husband, Prince Philip, Farage said.

"His admiration for her is unrivalled with anybody else in the world. I don't think he respects anybody else quite like he does the Queen. He loves the UK and he loves the Queen. He was concerned at the pictures of her being by herself, looking cut up", the UK politician pointed out, adding that Trump "reaffirmed his huge respect for what she does".

In connection with Oprah Winfrey's interview with the Duke and Duchess of Sussex in March 2021, Farage mentioned that Trump said his "views on Meghan are well known". Last year, the former POTUS stated that he was "not a fan" of Meghan Markle.

© REUTERS / HARPO PRODUCTIONS
Prince Harry and Meghan, The Duke and Duchess of Sussex, give an interview to Oprah Winfrey in this undated handout photo

In the 7 March tell-all interview, Prince Harry claimed the Royal Family has cut him off financially and his father Prince Charles stopped answering the phone following the Sussexes departure from the royal household, which was reportedly provoked by racism in the British media.

"He [Trump] was very excited to hear about the vaccine rollout in Britain compared to Europe, which was tremendous. It basically reaffirmed his view on Brexit and was pretty positive that this thing works", Farage added.

The EU and the UK remain embroiled in a bitter row over the export of the AstraZeneca vaccine produced by the Anglo-Swedish manufacturer. Brussels accuses London of blocking exports of the inoculation as the bloc struggles to obtain sufficient supplies to speed up its vaccination programmes.

© AP Photo / Evan Vucci
Trump Says He Had 'Tough Talk' With Johnson Over Huawei, Threatened to Stop 'Doing Business' With UK
The EU has so far fully vaccinated 7% of its population, as compared to Britain's 15%, according to the latest figures from the UK Department of Health.

He went on to say that Trump "understands that a lot of these political arguments cross in a way that makes the pond look very small" and that the 45th president "continues to be very hopeful for UK-US relations to get closer and still wants a US-UK trade deal to be done".