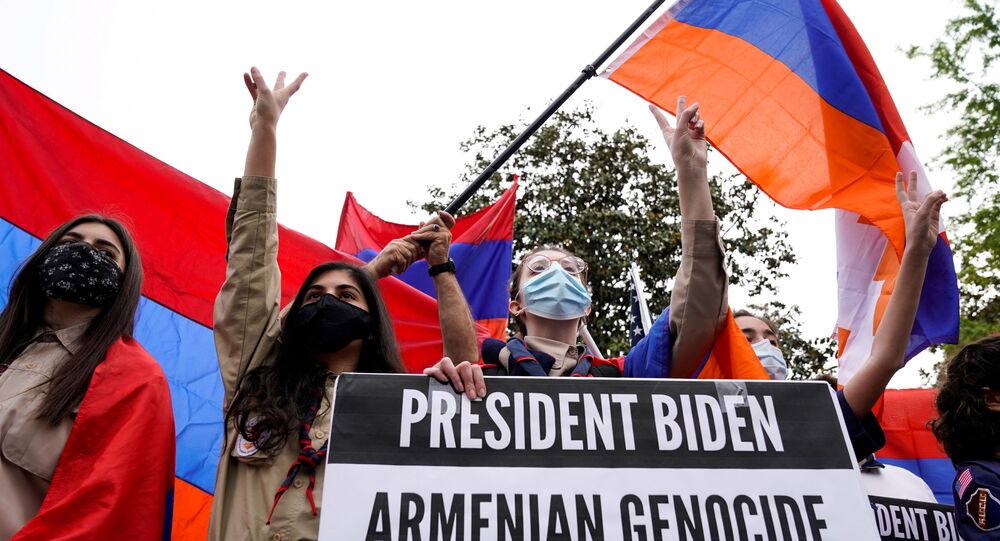 Joe Biden's recognition of the Ottoman-era Armenian genocide has already sparked a diplomatic row between the US and Turkey, who claimed the move undermined the two's mutual "trust and friendship". An Armenian community in Israel believes that Tel Aviv's thriving trade with Ankara is among the reasons it will not follow in Washington's footsteps.

On Saturday, when US President Joe Biden recognised on the Armenian genocide that was carried out by the Ottoman Empire 106 years ago, Diana Galstyan, a spokesperson for the Union of the Armenian Communities in Israel, breathed a sigh of relief.

She says she and her community were happy at the decision taken by the American president.

"We have been waiting for this for a long time. It was a dark page in the history of mankind, and we are happy that that injustice has been corrected. It was an important decision and we hope that other countries will follow suit", she said.

The trouble is that nations are not standing in line to recognise the massacres of 1915-1923, where up to 1.5 million Armenians were slaughtered by the Ottomans, as genocide.

As of today, only 30 countries have officially recognised the events of those days as genocide but Israel, to which Galstyan immigrated when she was a child and where she currently resides, is not one of them. And this frustrates her and others in the community.

"It is a shame that Israel hasn't done it so far. Israel should have been one of the first countries to recognise the Armenian suffering precisely because of the tragedy of the Jewish people and the Holocaust they have been through".

Yet, Israel is dragging its feet and the reason for this, says Galstyan, is the Jewish state's relations with Turkey.

Although cracks have appeared in them in recent years following the 2010 Mavi Marmara incident where ten Turkish nationals lost their lives, and as a result of Israel's operations in the Gaza Strip, trade between the two nations actually flourished.

And so did the two countries' security cooperation and military deals.

Since 1996, when the first military pact was signed, the two states have cooperated on a number of defence projects. They shared intelligence, exchanged pilots, and took part in joint military drills. Turkey has also purchased Israeli drones and other military equipment, deals that at times reached billions of dollars.

However, for Galstyan, a steady flow of cash cannot be an excuse, and she says it cannot be a substitute for values.

"Recognising the genocide is not a political thing. It is about morals and values. Every year, during the memorial to the victims of the Holocaust, we say 'never again' but history can repeat itself if such [crimes as the Armenian genocide] are not acknowledged".

© AP Photo / Burhan Ozbilici
Change of Mood or Wind of Change? Why US Refrained From Recognising Armenian Genocide Up Until Now
Galstyan along with other members of her community that make up some 10,000 people tried to change that equation. She says that in the past they held multiple rallies and demonstrations to draw politicians' attention to their cause.

They sent letters to decision-makers, gave out interviews to the media, and led a fierce campaign to raise awareness.

These and other measures, however, yielded almost zero results and the reason for this, believes Galstyan, is that Israel doesn't invest in educating its younger generation about the tragedy of the Armenian people.

"The majority of the Israeli public doesn't know anything about the genocide. Israel's history books don't mention the massacres, kids are not taught about it at school, and this is happening in a country that went through its own Holocaust".

And this is also the reason why Galstyan believes that things are unlikely to change for the better, which means that Israel will not recognise the Armenian genocide any time soon.

"At the end of the day, it is all about money and politics. They decide everything. We hope that the decision of Joe Biden will change Israel's attitude towards this issue but I am not that optimistic anything is going to change".