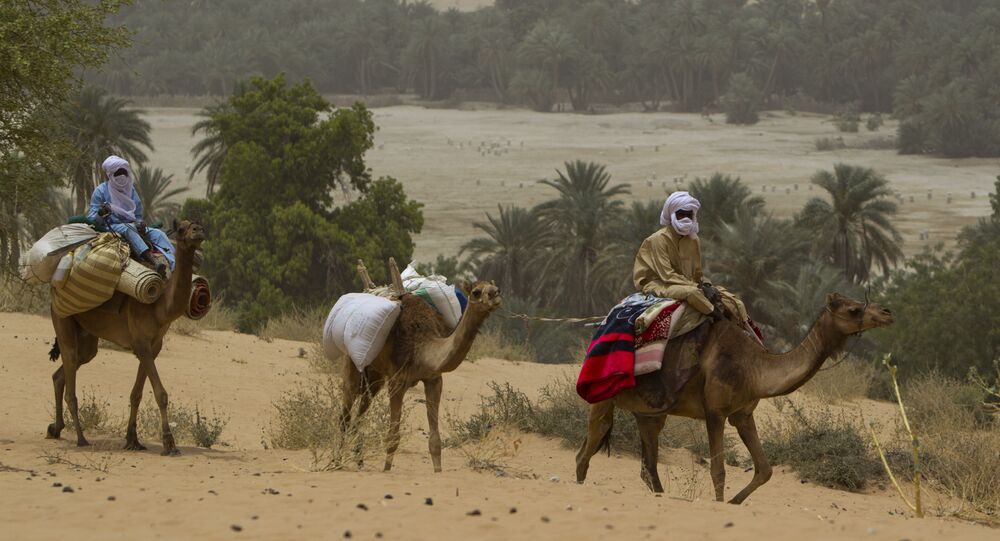 Succes Masra believes relations with Israel were established with one goal in mind - to keep President Deby in power, and that cooperation in the spheres of hi-tech, development, and agriculture were not even on the agenda.

When Succes Masra, the head of Chad's opposition and the leader of the party Transformers, met President Idriss Deby a month ago, he says he saw a "very tired man".

"I saw that he was exhausted mentally and physically and it was obvious that he was tired of power", he recalls.

During that two-hour meeting, Masra tried to convince the president that he was focusing too much on the past. He tried to explain to him that Chad needed a change and that change was only possible if Deby stepped down, making room for the younger generation in the African nation.

© REUTERS / Claire Soares
FILE PHOTO: Chad President Idriss Deby watches a rally in N'Djamena April 15, 2006. Deby's supporters paraded victoriously through the streets of the capital N'Djamena on Saturday but many nervous residents feared rebels fighting to topple him may return.

The opposition politician was also one of those who have been calling to boycott the April elections. But despite his efforts, they were held, with Deby winning yet another term.

If it wasn't for the tragic events of last Tuesday, when Deby was killed on a battlefield, he would have continued to govern the country that he has been in charge of for the past 30 years.

Now, the future looks uncertain. Shortly after Deby's death, the Chadian Army announced the formation of a transitional council that will run the country for the next 18 months. It will be headed by Mahamat Idriss Deby, the son of the slain leader.

It is likely that Mahamat will stick to his late father's policies and will make zero adjustments to the country's foreign policy.

But for Israel, who is watching the developments closely, the change of leaders is still a cause for concern.

In 2019, Chad became the third Muslim country to normalise relations with Israel after Egypt and Jordan.

That recognition opened a new market for Israel, it gave the Jewish state another avenue of access to Africa, it shortened flights to remote destinations and, most importantly, it showed that a normalisation agreement was possible even if the Israeli-Palestinian conflict remained unresolved.

In Pursuit of Personal Interests

For Deby, the interests were different. With Chad suffering from water shortages and food scarcity, ties with Israel were important to get the African nation out of a deep economic abyss. It was also instrumental in bringing in Israeli technology and innovation.

Masra, however, says the Chadian president was pursuing quite another agenda.

"Deby didn't go to Israel for hi-tech, science, agriculture, or development projects. He went there to seek protection. He went there for security. He wanted to remain in power and was willing to use any tool that would help him to remain at the helm".

While it is not clear what role, if at all, Israel played in "keeping Deby in office", Chad and the Jewish state did cooperate on a number of security projects, the main one being to contain terrorism in the region.

Throughout the years, terrorists from Boko Haram and other extremist groups, have killed more than 30,000 Chadians. Three million others have been displaced because of insurgencies in the area.

© REUTERS / Chad TV/Reuters TV
Mahamat Idriss Deby, also known as Mahamat Kaka, named interim president by a transitional council of military officers, is seen during a news conference in Ndjamena, Chad, April 20, 2021 in this still image taken from a video

Deby was trying to curb them and for Israeli officials, he was a man they could rely on. But for ordinary Chadians, says Masra, that cooperation in the field of security went unnoticed and it didn't bring about any visible results.

And this is why the head of the opposition believes, they might be revised.

"It will depend on the transition of power, of course. But I do believe that the nature of those relations will change. They will no longer be relations between Israel and Deby. If those ties to continue, they will be between countries, not politicians, who pursue self-interests".