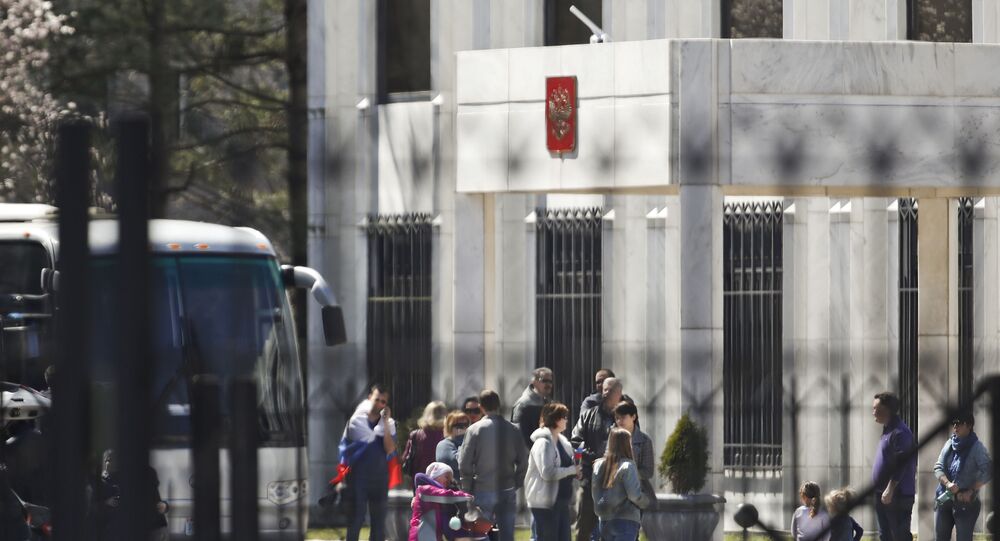 The US has rallied its European allies to launch a new diplomatic expulsion campaign and a public opinion crackdown against Russia. In addition to the situation in eastern Ukraine, Russian opposition leader Alexei Navalny's hunger strike in prison and reports that he is "dying" have become the latest focus of pressure on Russia.

It is noteworthy that countries including the Czech Republic, Poland, Ukraine, and Bulgaria have joined the US in expelling Russian diplomats, mostly claiming that these Russian diplomats have conducted "activities incompatible with their status". This is a highly ambiguous reason for expulsion. Once members of the Warsaw Pact or part of the Soviet Union, these countries are now often the first to respond to the US' calls to confront Russia.

© Sputnik / Maxim Blinov
Trump: US Should Improve Relations With Moscow, Instead of Forcing Russia, China Together
There are complex historical reasons for Central and Eastern European countries tilting toward the US and becoming "anti-Russia", which are difficult for outsiders to comment on. It is a pity that internal disintegration rather than coercion from the US had directly led to the collapse of the Soviet Union. The Russian Federation was one of the main promoters of this disintegration, and the original agreement to replace the Soviet Union with the Commonwealth of Independent States (CIS) was signed by Russia, Ukraine and Belarus.  The Russian leaders who destroyed the Soviet Union had no idea what would happen to their country afterwards.

The collapse of the Soviet Union has brought about geopolitical changes globally, and the evaluation of the event is destined to vary from country to country and from time to time. But it has become increasingly clear that Russia has been the biggest loser from that collapse.

Many Russians once believed that when the Communist Party stepped down and the Soviet Union collapsed, the US and the West would embrace Russia and respect them for taking the initiative to end the Cold War. The reality, however, is harsh. Moscow has received no gratitude or kindness from the West. From the moment the Soviet Union collapsed, the US has arrogantly treated Russia as a defeated country in the Cold War, engaging in all possible moves to suppress Russia at will.

The collapse of the Soviet Union was a geopolitical disaster for Russia. As the dominant power in the Soviet Union, if it had chosen to support reforms to solve problems in the beginning, Russia could have paid a much smaller geopolitical price than it would pay over the following 30 years. Back then, Moscow had a broad sphere of influence and powerful capabilities; it could act independently and defiantly against Washington. But it has ceded those geopolitical resources, giving up its advantages.

The US' vicious attitude toward Russia offers a glimpse into the brutality of great power competition and helps people see through Washington's geopolitical manipulation measures. The US portrayed its Cold War with the Soviet Union as an ideological confrontation to conceal its intention to dominate the world alone. Many people, including Russians, believed that a political change of course would fundamentally change their relationship with the US, and that Russia could thus integrate into the West and become a dignified member of the Group of Eight.

© Sputnik / Alexey Maishev
Moscow Says US is Behind Expulsion of Russian Diplomats From Czech Republic
Yet Russia is too large, with a nuclear arsenal on par with that of the US. It spans the Eurasian continent and advocates multi-polarity, with no possibility to becoming a new member of the West that is submissive to Washington. The US then took advantage of its "victory," promoted the eastward expansion of NATO, squeezed Russia's strategic space at the fastest speed, and completely abandoned its verbal commitment that after Germany was unified and remained a NATO member, the bloc would recruit no former Warsaw Pact countries or former Soviet republics as new members.

The US is extremely untrustworthy. Its method of great power competition fully mobilises the ideological resources of its own and in the West, and it is very good at infiltrating into other countries, which makes it very deceptive. Since the collapse of the Soviet Union, the world has witnessed other "colour revolutions" supported by the US. The destinies of countries that had experienced subversion of state power have proven tragic, as the US has neither the intention nor the ability to provide substantial assistance to those countries.

China, as a newly targeted "strategic competitor" of the US, is fortunate that we have witnessed all the colour revolutions in the world in the past 30 years. This is equivalent to having gotten politically vaccinated and receiving a boost shot to enhance the effectiveness. The Chinese people must protect the fruitful achievements of the People's Republic of China, and remain sober-minded about the US' repeated deceptive clamour that the strategic game between the US and China is a battle between "democracies and autocracies".

China must continue to grow its national strength and weaken the ability of the US to pressure it "from a position of strength". China can only be a friend with whom the US has to coexist because it cannot crush it. We must not bear any illusion that the US would embrace China due to its changes. China is so big that we cannot try to get rid of the natural burden that comes with it. Since China is big, it should live with great courage and advantages.