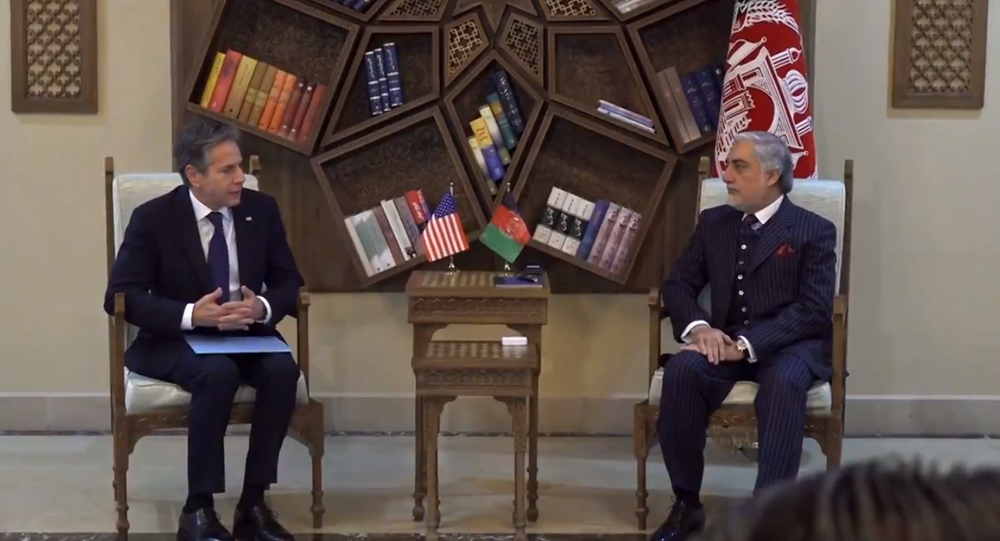 The visit comes less than 24 hours after President Joe Biden's announcement that the United States would be withdrawing its troops from the war-torn country by the upcoming 20th anniversary of the 9/11 terror attacks.

Secretary of State Antony Blinken arrived in Kabul on Thursday to "demonstrate" the "ongoing commitment of the United States to the Islamic Republic and the people of Afghanistan."

"We have a partnership that is changing, but enduring, and as we've been discussing, as the president has said, we have a new chapter, but it's a new chapter that we're writing together," he said, speaking at the presidential palace in Kabul Thursday afternoon.

Video: US Secretary of State Antony Blinken arrived in #Kabul today and met with Abdullah Abdullah, the chairman of the High Council for National Reconciliation. #Afghanistan pic.twitter.com/aDIZDdC9Dk

"Thank you Mr. Secretary. You have been with us in the past twenty years especially. You have made tremendous contributions and sacrifices alongside our own people, and we are grateful to your people, your country, your administration. The decision about the moving to the next phase into the next chapter, we respect that, but at the same time thank you for your continued commitment and support of peace, a peaceful settlement, and also a continued commitment toward the people of Afghanistan," Abdullah said.

Blinken also met with President Ashraf Ghani, telling him that the withdrawal of troops would not mean a decline in strategic relations between Washington and Kabul. Ghani similarly indicated that he "respects" the US decision and would be "adjusting our priorities" to prepare for the withdrawal.

"Blinken arrived in Kabul to discuss with President [Ashraf] Ghani and other Afghan government officials the peace process and how US troops will leave Afghanistan," the source, who spoke on condition of anonymity, said.

In addition to Abdullah, Ghani and other officials, Blinken also met with US embassy staff, and with US troops currently stationed in Afghanistan. Between 2,500 and 3,500 US personnel are thought to be located in the country at the moment, with exact numbers difficult to pinpoint amid reports that up to 1,000 of them are engaged in covert operations.

Ending the Longest War in US History

Blinken's visit to Kabul comes in the wake of President Biden's announcement Wednesday that the United States would begin its final withdrawal from Afghanistan starting 1 May, and complete the pullout by 11 September - the 20th anniversary of the 9/11 terror attacks - which served as the pretext for the US invasion of Afghanistan in late 2001.

© AP Photo / Sgt. Justin Updegraff
Biden Says US to Begin Final Withdrawal From Afghanistan Starting May 1, Warns Taliban Not to Attack
Speaking in Washington, Biden said that the reasons for the continued deployment of US forces has become "increasingly unclear," and suggested that America had "accomplished all that we can militarily" in the war-torn country.

Biden promised that the US would continue to provide security assistance to Afghan security forces after withdrawal, and called on Pakistan, Russia, China, India and Turkey to step up and "support Afghanistan."

He also warned the Taliban not to attack US and NATO forces as they withdraw. Previously, the fighters had threatened to resume attacks on US and coalition forces if they did not complete their withdraw by the original 1 May deadline outlined in the US-Taliban Doha peace deal of February 2020. In a tweet Wednesday, the Taliban warned that "the Islamic Emirate of Afghanistan seeks the withdrawal of all foreign forces from our homeland on the date specified in the Doha Agreement."

If the agreement is breached and foreign forces fail to exit our country on the specified date, problems will certainly be compounded and those whom failed to comply with the agreement will be held liable.

Biden said he spoke to former president George W. Bush, who invaded Afghanistan in 2001, and to his former boss Barack Obama, before announcing Wednesday's decision. He did not mention former president Donald Trump, who initiated the US-Taliban peace deal. That peace agrement promised the withdrawal of US troops in exchange for a commitment by the Taliban not to allow its territories to be used by terrorist groups seeking to do harm to the United States. It does not account for the conflict between the Taliban and the Afghan government, with the two sides expected to work things out independently.

NATO confirmed Wednesday that it would synchronize the withdrawal of troops with the US, and that Resolute Support Mission forces would be removed "within a few months."

The US and NATO War in Afghanistan has killed over 38,000 civilians, over 65,000 Afghan security forces personnel, 3,500+ coalition troops, 4,000 Western mercenaries and between 67,000 and 72,000 Taliban fighters. Millions of people have been internally or externally displaced by the war, and the US alone has spent over $2 trillion on the conflict.

The war in Afghanistan has now raged for over two generations, and began in the late 1970s, after revolutionaries overthrew the government and established a socialist, pro-Soviet regime in Kabul. The government's hasty attempts to introduce land reforms and its commitment to equality between men and women and the education of girls in rural areas, combined with CIA meddling, sparked a civil conflict, which was exacerbated by the Soviet intervention in the country in late 1979. Throughout the 1980s, the Reagan and Bush administrations funneled billions of dollars in cash and arms to jihadist militias seeking to topple the Kabul government. In the early 1990s, after the collapse of the Soviet Union and the Yeltsin government's decision to stop fuel deliveries, the central government collapsed, with the Taliban and other militias dividing up the country, turning it into a failed state.