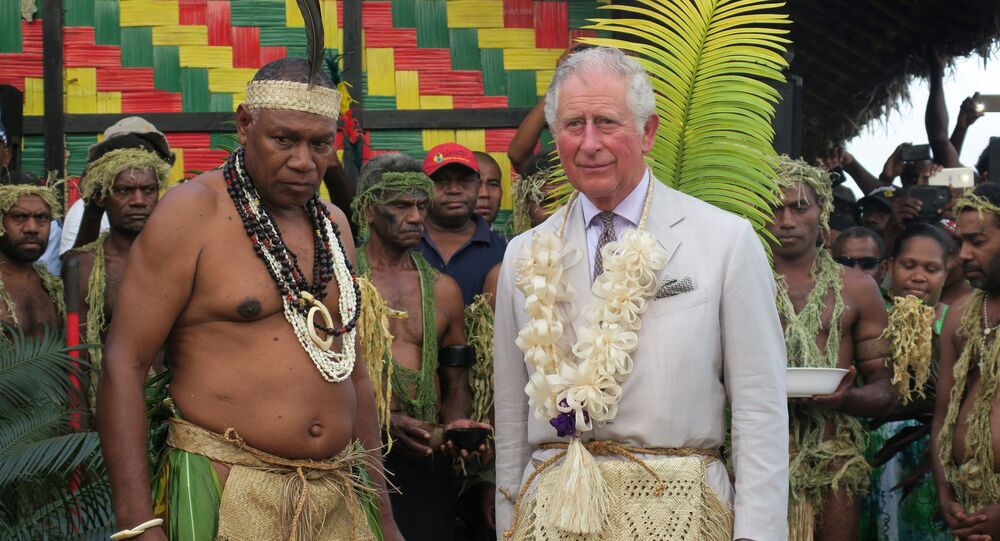 The late Duke of Edinburgh had devoted fans not only among Britons but also thousands of kilometres away on the small island of Tanna where local men worship the Queen’s husband as their spiritual deity. He will return to them even after his death, they believe.

Prince Charles may soon be worshipped by Pacific villagers from Tanna island, part of the archipelago nation of Vanuatu, following his father’s death, local leaders have told AFP reporters.

Worshippers from the villages of Yaohnanen and Yakel, who view the Queen’s husband as their “true Messiah,” will mourn their spiritual leader for the next 100 days in traditional style coupled with magic, while gathering around an ancient banyan tree and drinking intoxicating kava.

Local legend has it that Prince Philip was the embodiment of a powerful white-skinned spirit from the mountain who travelled overseas to marry a powerful woman. Vanuatu tribes learned about the duke’s life story from British colonists back in the 1960s and 70s – he fitted the image of the pale-skinned son of the mountain god, and so the Prince Philip Movement was born.

This belief was reinforced when the duke visited Vanuatu in 1974 and met members of the movement, gifting them his portrait and posing for a photo with a pig-killing club.

Nothing can shake the movement's belief in the duke’s divinity and according to the head of the Tanna Council of Chiefs, Willie Lop, Prince Philip was also naturally “black.”

"Prince Philip is from Tanna. He rode his horse down to the south of the island, and leapt into the sea,” Willie Lop maintained to journalists, adding with confidence:

Many on the island think that the prince will eventually make his way back to Vanuatu – a local leader called Albi says the prince's spirit his “left his body” but “it lives on.”

“It's too soon to say where it will reside," Chief Albi says.

But what Duke of Edinburgh failed to do during his lifetime was to actually visit the tiny volcanic island where so many now mourn his death. He did continue exchange letters and gifts with local tribes, though.

Prince Charles may succeed his father as a local divine being if the elders agree among themselves when the mourning period for Philip ends. They're hopeful his son might do what the duke did not and actually visit Tanna.

"We never got the chance to meet [Prince Philip] face to face like you and me right now," chief Jack Malia told reporters.

"If [Prince Charles] would agree to come some day, then he must come down here so that we can sit together and talk."

Prince Charles visited Port Vila in Vanuatu in 2018 and was appointed a Mal Menaringmanu during a colourful ceremony, which is a title given to an honorary chief who watches over the people - all the while drinking kava.