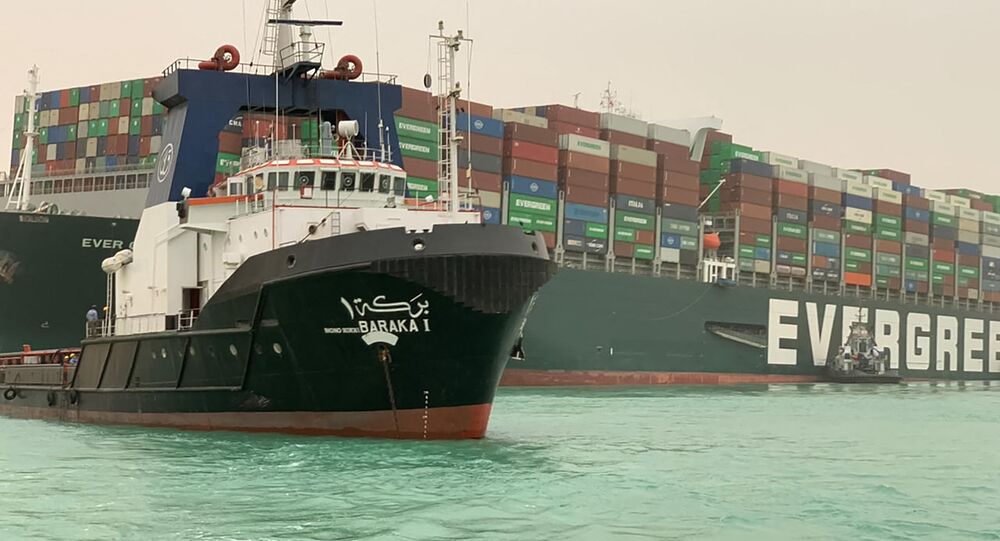 CAIRO (Sputnik) - An Egyptian court has ruled that the Ever Given container ship be seized until its owner pays $900 million to the Suez Canal Authority (SCA) in compensation for blocking the critical waterway for almost one week, the Shorouk News newspaper reported, citing sources.

The temporary confiscation was requested by the SCA in a suit filed with the Ismailia economic court. The canal authority asked that the ship not be let move until all salvage and maintenance expenses, as well as lost traffic fees, are paid in full for the six-day period that Ever Given had disrupted the navigation.

The Panama-flagged ship will now be placed under the court's supervision, in line with Article 6 of Egypt's law on maritime trade, until the operator fulfills the SCA's demands, according to the report. Court officers will reportedly go to the ship's current stop in the Bitter Lakes area on Tuesday to notify the crew of the ruling in person.

The incident with the Suez canal's blockage is still being investigated. SCA chief Osama Rabie told Egypt's Youm7 newspaper that the conclusions were expected to be announced on Thursday.

Ever Given ran aground in the Suez Canal on 23  March. It got wedged diagonally between the two banks, blocking the passage for continuously arriving ships in both directions and causing a massive jam. It was not until March 29 that Ever Given was dislodged, thanks to unceasing excavation and towing efforts.

The last of the 422 vessels stranded at the Suez Canal tips passed through the waterway on April 3. The canal authority estimated the blockage's total damage to global trade at $1 billion.