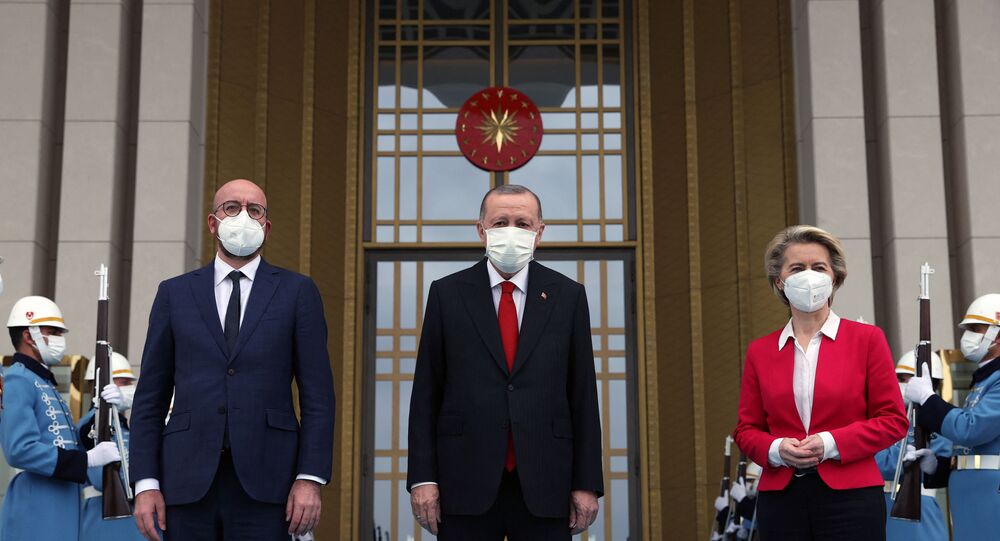 The lunch took place shortly before the so-called chair incident, which has already been nicknamed "sofagate" on social media.

The incident occurred during Turkish President Recep Tayyip Erdogan’s meeting with Michel and von der Leyen in Ankara on Tuesday. The two men occupied the two available chairs, leaving von der Leyen with no option other than to take a seat on the sofa.

As far as the working lunch is concerned, Politico described it as "another diplomatic status snafu", during which the organisers reportedly prepared two tall chairs - for EU delegation leader Michel and his Turkish counterpart.

Additionally, there were eight normal-sized chairs, including those for Michel's incoming and outgoing advisers. According to Politico, "on Erdogan's side, there were four advisers but no counterpart" for von der Leyen, "not even the foreign minister".

The news outlet noted that the first female European Commission president was "relegated to the status of Michel's note-taker".

At the end of the day, it was von der Leyen's new diplomatic adviser, Fernando Andresen Guimaraes, who interfered in the situation by asking the Turkish hosts to bring in another tall chair for his boss and one more normal-sized chair for him so that von der Leyen could also have an aide during the lunch, according to Politico.

The news outlet's report came a day after Turkish Foreign Minister Mevlut Cavusoglu rejected "unfair accusations toward Turkey" over the "sofagate" incident, insisting that the seating arrangement-related protocol had "been carried out within the framework of worldwide known Turkish hospitality".

© AP Photo / Francois Lenoir
Turkey's Erdogan Expected to Stand Down in Spat With EU If Bloc Shows Unity, Reports Suggest
"The EU side's demands were fulfilled. This means that the seating arrangement was made according to their suggestions. Our protocol units came together previously and their demands were realised", the top Turkish diplomat added.

The remarks followed European Commission spokesman Eric Mamer insisting on Wednesday that von der Leyen should have been treated "exactly in the same manner" as Michel and that she was "clearly surprised" about the chair incident.