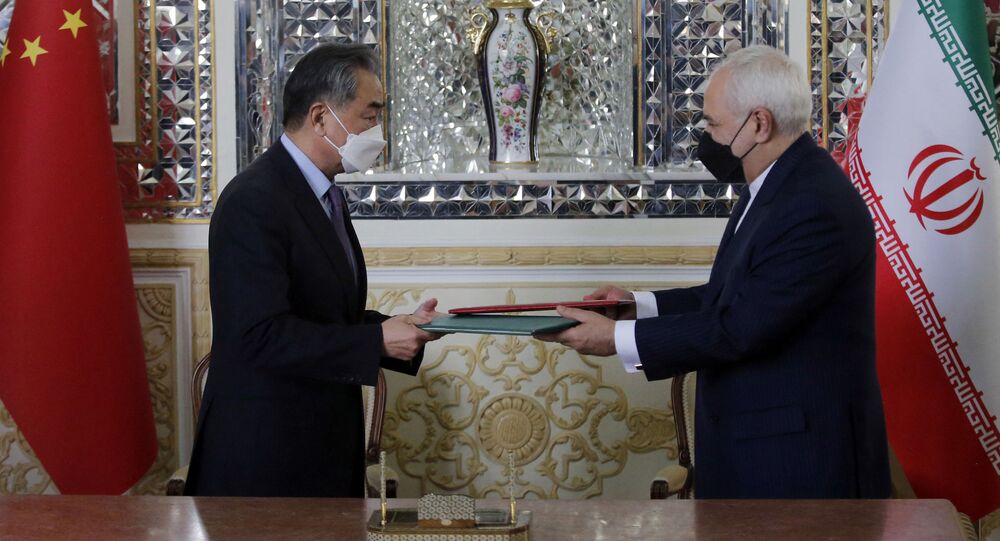 As Tehran and Beijing signed off on a sweeping partnership agreement on 27 March, charting a 25-year roadmap for economic cooperation, Foreign Minister Wang Yi underscored that China opposes unjustified unilateral sanctions against Iran, supporting its efforts to protect state sovereignty.

Iran's parliament speaker has underscored the strategic importance of the recently signed cooperation agreement between the Islamic Republic and China, urging the United States to regard it is a sign that the "next century belongs to Asia", reported Press TV.

"[The] signing of the comprehensive Iran-China cooperation agreement is an important warning to the United States to know that international relations are moving fast to the detriment of America and this country is no more in a position to unilaterally impose a model, plan, or agreement on independent countries", said Mohammad Baqer Qalibaf at an open session of parliament on Sunday.

The speaker pointed to the importance of capitalising on current opportunities in order to "translate this document into real economic and political projects, plans, and cooperation while safeguarding national interests".

In a post on his Instgram page on Thursday, Mohammad Javad Zarif reportedly summed up the goals, principles, and features of the sweeping agreement, saying it seeks "practical promotion" of strategic ties and provides "a roadmap and long-term horizon".

The cooperation agreement was in no way meant to target any third party, said a spokesman for China's Foreign Ministry on 29 March.

Mohammad Baqer Qalibaf also touched upon the Strategic Action Plan to Counter Sanctions, a law passed in December by the Iranian parliament.

According to the parliamentary speaker, the legislation "made the clock tick in favour of Iran".

"The Americans should know that Iran's main strategy for getting rid of sanctions is based on defusing them, and now that the country's nuclear industry has been reactivated, it is up to them to decide and lift the Iran sanctions in toto and in a practical way", said the Iranian parliament speaker.

On 1 December, Iranian lawmakers voted in favour of the action plan, which tasked the administration with suspending more commitments under the 2015 nuclear deal, officially known as the Joint Comprehensive Plan of Action (JCPOA), signed by Iran and the P5+1 group of countries: the United States, Britain, France, Russia, and China plus Germany.

Former President Donald Trump unilaterally scrapped the deal in May 2018, citing alleged violations of the terms of the agreement.

After initially giving the remaining signatories one year to facilitate a workaround to US-imposed banking and energy restrictions against Tehran, in 2019 Iran made a decision to gradually scale back on its commitments, ramping up uranium enrichment levels beyond the 3.67 percent purity limits outlined in the JCPOA, with enrichment reaching 20 percent by January 2021.

Tehran has, however, maintained it has no intention to pursue nuclear weapons.

Throughout his presidential campaign, Democrat Joe Biden vowed a speedy US return to the JCPOA. He has since tied Washington's return to the nuclear pact to Iran making the first step by resuming full compliance with its terms.

In a telephone call with French FM @JY_LeDrian today I urged France to show a constructive stance on the JCPOA in next week's meeting in Vienna.

I called on France to honor its commitments under the accord, and to cease abiding by illegal sanctions imposed by the US.

​US State Department deputy spokeswoman Jalina Porter said last week that a scheduled meeting between representatives of Iran and other parties to the deal in Vienna on Tuesday would discuss "the nuclear steps that Iran would need to take in order to return to compliance with the terms of the JCPOA".

In response, Iranian Foreign Ministry spokesman Saeed Khatibzadeh stated that Tehran will not accept a gradual lifting of US sanctions, in an exclusive interview with Press TV on Saturday.

Iran Could Triple Its Exports to China in Coming Years - Report