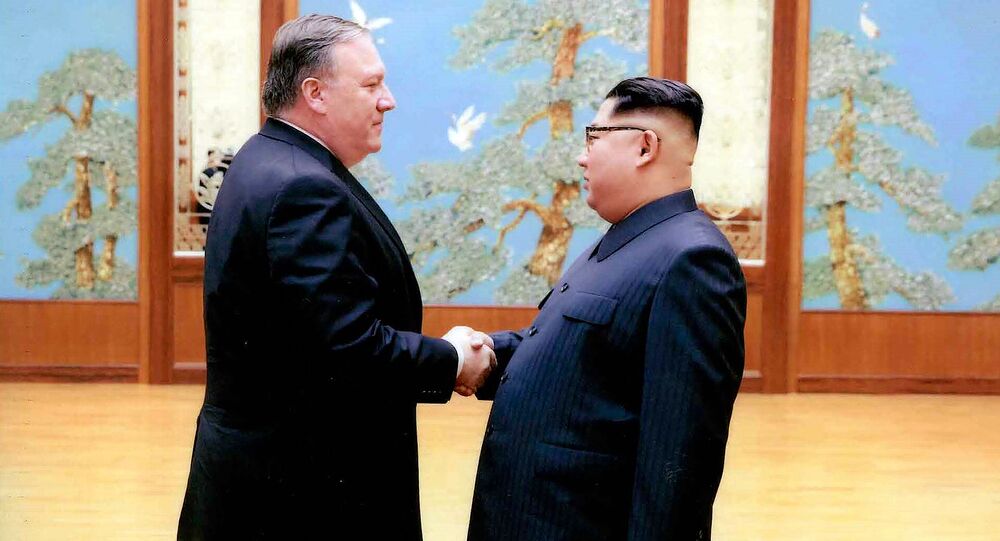 The Trump administration held two denuclearisation summits with North Korea, but the efforts eventually ended in a stalemate when Trump apparently demanded that Pyongyang dismantle its nuclear facilities in return for sanctions relief, while Pyongyang wanted the sanctions to be lifted first before denuclearisation could start.

Former US Secretary of State Mike Pompeo has expressed "regret" that former President Donald Trump's administration was unable to persuade North Korean leader Kim Jong-un to give up the country's nuclear weapons.

"I regret that we didn't make more progress", Pompeo said in an interview with the conservative-leaning podcast "Ruthless" published on Thursday. "We convinced him not to do more nuclear testing and more long-range missile testing, but we weren't able to get him to give up his nuclear programme​".

Pompeo met the North Korean leader while serving as the director of the CIA in April 2018. According to the media, the meeting amounted to a significant break in US foreign policy, as the secretary of state was photographed while shaking hands with Kim.

He said he went to North Korea to ease tensions after a series of threats by former President Donald Trump claiming the US would unleash "fire and fury" if North Korea didn't change its policy of "threatening" the US.

"We were trying to take the tension level down and create a situation where we could have a rational discussion", Pompeo said. "The president was prepared to consider whether a summit might be appropriate. It was really quite the, quite the experience".

Pompeo noted that he spent months preparing for his meeting with Kim, but that "nothing can quite prepare you for being there".

Pompeo, one of Trump's most prominent supporters in his Cabinet and in the public arena, has frequently criticised the Biden administration's foreign policy initiatives, such as a potential return to the Iran nuclear deal. Early last month, the former secretary of state also hinted that he might try his luck in the 2024 presidential race.

In 2019, talks between Trump and Kim Jong-un in Hanoi fell through without any concrete agreements and several rounds of talks at lower levels failed to produce any results. The former US president just walked out of the summit after he reportedly said the United States would never lift strict economic sanctions until North Korea had dismantled its entire nuclear arsenal.

‘We Secured Freedom’: Highlights From Pompeo Speech at CPAC