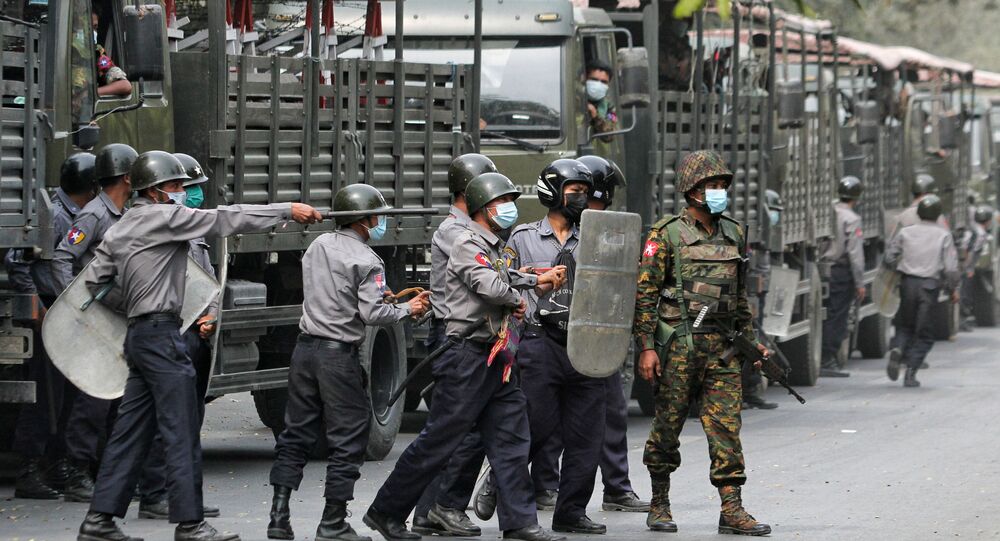 "I am following the worrying events in Myanmar. The escalation of violence with more than 100 civilian killings perpetrated by the military against its own people on its ‘Armed Forces Day’ is unacceptable. Far from celebrating, the Myanmar military has made yesterday a day of horror and of shame," Borrell said in a Sunday statement.

Borrell called for an end to violence in Myanmar and said that the EU is making efforts to start a political process in the country that is currently ruled by a military junta following a February 1 coup d'état.

"We will continue to use the EU’s mechanisms, including sanctions, to target the perpetrators of this violence, and those responsible for turning back the clock on Myanmar’s path of democracy and peace," Borrell said.

The Pentagon released a joint statement on Saturday from the chairman of the US Joint Chiefs of Staff, Gen. Mark A. Milley, and the chiefs of defense of Australia, Canada, Germany, Greece, Italy, Japan, Denmark, the Netherlands, New Zealand, South Korea and the UK, condemning the junta's use of force against protesters in Myanmar.

US Secretary of State Antony Blinken and the UN mission in Myanmar have also condemned the Saturday crackdown on protesters.

US President Joe Biden called the killings at the Myanmar protests "terrible."

"It’s terrible, it’s absolutely outrageous, and based on the reporting I’ve got an awful lot of people have been killed totally unnecessarily," Biden told reporters on Sunday, as broadcast by MSNBC.

According to the Assistance Association for Political Prisoners (AAPP) in Myanmar, over 90 people, including children, were killed during Saturday protests against the military rule in Myanmar. Fatalities were reported in the cities of Yangon, Bago, Mandalay and surrounding regions.

On the eve of the deadly protests, the military-controlled MRTV channel warned that participants in acts of violence and unrest "could be accidentally shot in the head or back." Unlike other outlets, the state-run channel has reported that there were armed people among protesters who were shooting at soldiers and police, provoking soldiers to return fire.

On February 1, Myanmar's military seized power in the country, announcing a one-year state of emergency and vowing to take action against allegation of voter fraud during the November 8, 2020 general election. The military said it was committed to the democratic system and vowed to hold new and fair elections after it ends the state of emergency.

Protests have been held across Myanmar since the military took over. According to AAPP, over 420 people have been killed during the protests since the start of February and more than 2,420 have been detained.

The US and the UK have imposed sanctions against multiple individuals and entities affiliated with Myanmar’s military, as well as some of Myanmar’s conglomerates.

US Condemns Crackdown on Myanmar Protesters