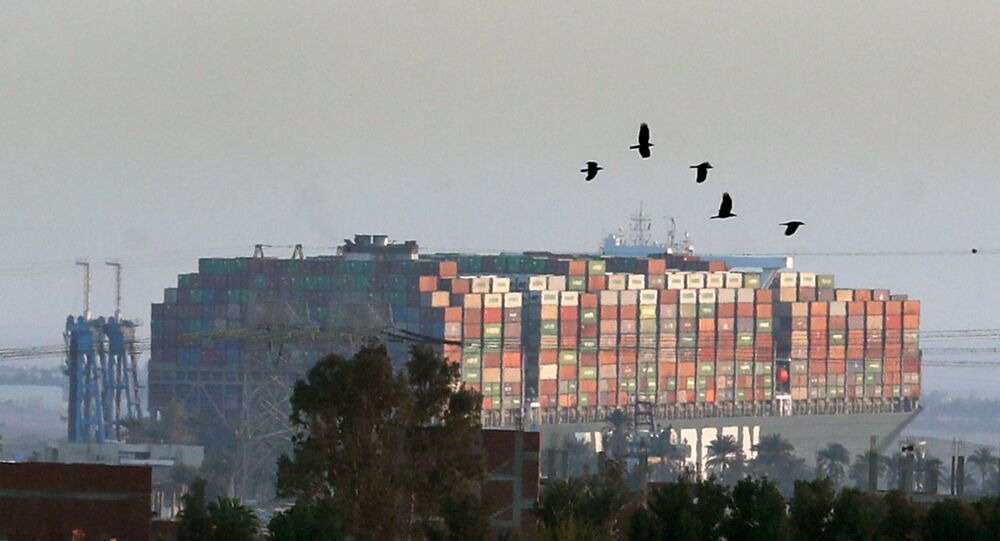 Over 320 Ships Stuck in Traffic Jam as 'Ever Given' Container Ship Blocks Suez Canal, Officials Say

On Tuesday, the Suez Canal was blocked after a 400-metre-long Japanese container vessel called the Ever Given ran aground causing massive delays.

More than 320 ships are idling in a traffic jam as the Ever Given container ship continues to block the Suez Canal after running aground on Tuesday, the head of the waterway authority, Osama Rabie, said Saturday.

"At the moment, 321 ships are waiting for their turn to pass through the Suez Canal due to the situation," Rabie told a press conference.

He added that fourteen tugs are involved in the operation to free the stranded ship. The situation, he noted, is complicated by the size of the ship and the number of containers aboard. The rudder and the propeller of the vessel have started working again, Rabie added.

This comes after earlier on Saturday, the operation to refloat the Ever Given container vessel stranded in the Suez Canal resumed. If the new attempt, which is counting on high tide, fails another effort will be made on Sunday morning, Reuters reported, citing three sources familiar with canal operations.

Earlier in the day, the Jerusalem Post reported that the tanker budged for the first time on Friday night since getting stuck, after 20,000 tonnes of sand were dug out from underneath it.

© REUTERS / Mohamed Abd El Ghany
Ever Given: Owner of Cargo Ship Blocking Suez Canal Reveals When Vessel May be Refloated
The huge container ship weighing more than 200,000 tonnes ran aground in the Suez Canal as it was sailing from China to the Netherlands on 23 March. Operated by the Taiwanese company Evergreen Marine, the vessel was blown sideways by 40-knot winds and a dust storm. No injuries were reported among its 25-member Indian crew. According to the initial investigation, both mechanical and engine failure have been ruled out as a possible reason for the incident.

About 10 percent of the world's trade flows through the Suez Canal. According to Lloyd's List, more than $9 billion worth of goods are held up for every day the passage is blocked – that's about $400 million an hour.