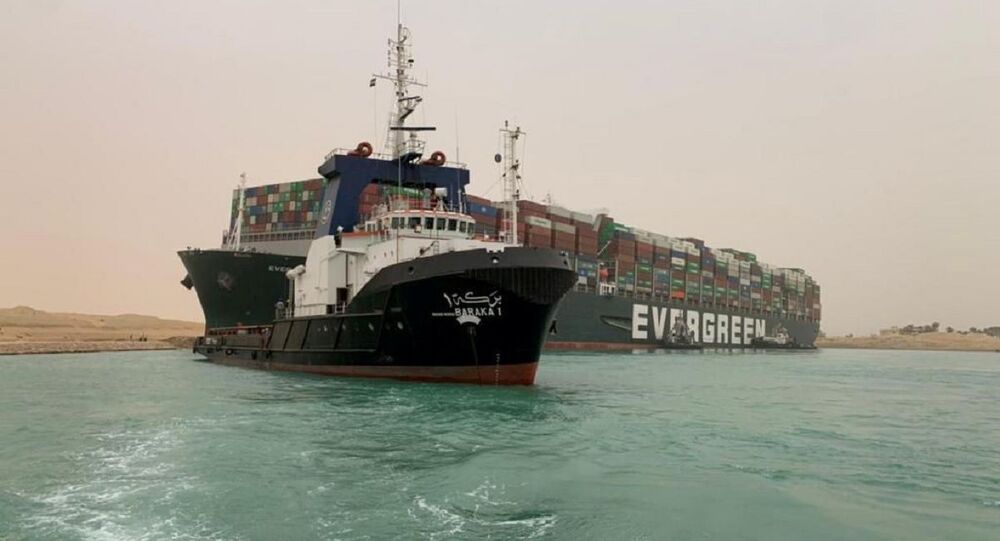 Vessels attempting to travel one of the busiest waterways in the world faced problems on Tuesday after a huge cargo ship wedged sideways into the banks blocking all traffic in both directions.

The first ship from the northern convoy in the Suez Canal has started moving, Reuters reported on Wednesday, citing source and witnesses. The canal was blocked after Panama-flagged vessel Ever Given, en route from Malaysia to the Netherlands stuck sideways, creating a giant traffic jam.

Sputnik Screenshot
The Panama-flagged cargo vessel Ever Given seen sideways in the Suez Canal on Vesselfinder March 23, 2021, as several tugboats attempt to free her

Bernhard Schulte Shipmanagement (BSM), which is the technical manager of the Ever Given, noted that the crew is safe and no pollution was detected, confirming that it is working with authorities to refloat the vessel.

"There have been no reports of injuries, pollution or cargo damage and initial investigations rule out any mechanical or engine failure as a result of the grounding," BSM said. "BSM’s immediate concerns are to re-float the vessel safely and for marine traffic in the Suez Canal to resume".

About 12 percent of the world's trade passes through Suez Canal, with an average of more than 50 vessels crossing it daily. With the ship sideways, no traffic can pass through the canal, which is the only way to get from the Mediterranean Sea to the Red Sea.